Many tourists stick to Amsterdam as their to-go destination for a short trip, as the capital has incredible architecture, countless museums, and a vibrant nightlife. However, scattered across the country, you’ll find less-visited and equally beautiful cities. All within easy reach from each other, because distances are short and transportation convenient. A journey to lesser-known towns allows you to soak up even more of the Dutch past, design and traditions.

Here is our guide to 10 nifty cities in the Netherlands, outside the crowded capital Amsterdam.

More and more visitors find their way to this harbour hub, the second-largest city in the country and the fantasy of many architecture lovers. Unlike Amsterdam, Rotterdam doesn’t have a well-preserved medieval centre due to heavy bombing in the Second World War. Risen from the ashes, Rotterdam now has phenomenal contemporary architecture, hip food courts, and a whole bunch of appealing festivals. Don’t forget to visit the iconic Cubic Houses, the astonishing Erasmus Bridge and the Markthal food hall with cosmopolitan wine and dine options.

Other fun activities include a round boat trip through the grand Rotterdam Harbour and enjoying a meal or drinks from the Euromast observation tower. 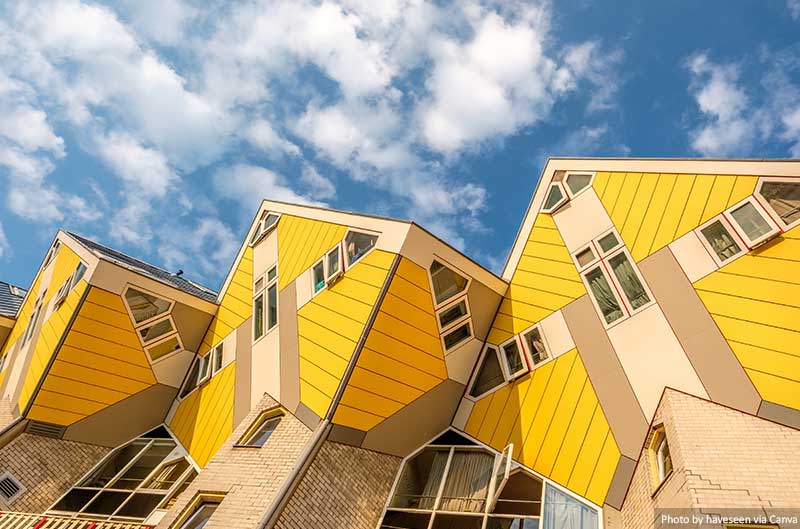 Geographically, Utrecht is the heart of the Netherlands. This makes the city an easy to reach spot from all over the country. Here, you can enjoy a cruise or kayak over the canals in the old centre, mount the iconic Dom Tower, or cycle to the majestic De Haar Castle just outside the city borders. If you wish for a more relaxing day, downtown Utrecht has an incredible selection of restaurants, shops and bars.

If travelling with kids, the Miffy Museum is another recommended stop. This interactive museum is wholly dedicated to the adventures of the fluffy, world-famous cartoon rabbit and his family. Kids can play, fiddle and create their own Miffy stories. 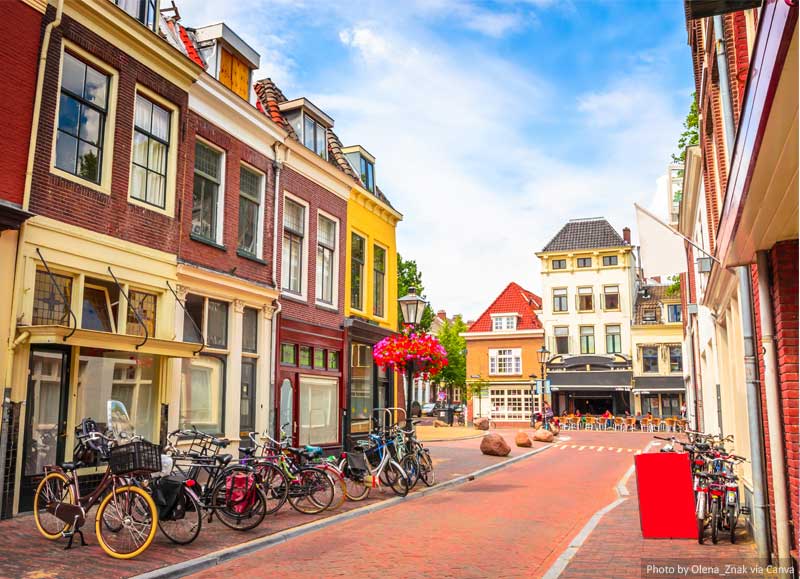 Located near the endless beaches on the west coast, this historic gem has everything that draws people to Amsterdam, but in a rather compact size. Kick your journey through this medieval town off on the Grote Markt (big market). Here you can admire the grandeur of old warehouses and the monumental Grote Kerk cathedral. Art admirers should include the Frans Hals Museum in their travel itinerary. This Golden Age painter was one of the most famous inhabitants of Haarlem and much of his work is on display in the museum.

Culture meets culinary joy in the Jopenkerk, a former church converted into a brewery and an ideal spot to chat with fellow travellers over a pint. 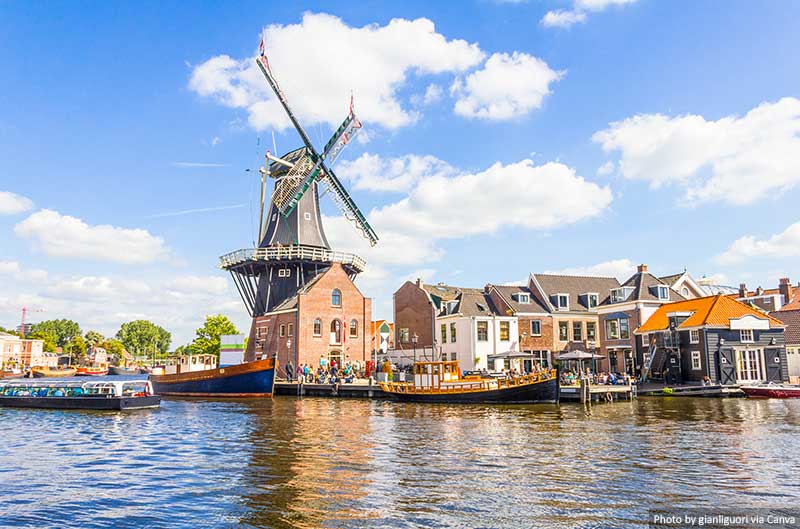 Being a university city, Groningen hosts historical campuses and a lively bar scene. An excellent place for a proper introduction to the city is the Martinitoren, the tallest tower in Groningen at 97 meters tall. Climb the 260 stairs to the top, where your efforts will be rewarded with stellar views of the city and the surrounding countryside.

Groningen has its fair share of art exhibitions. Such as the colourful and odd-looking Groninger Museum which has an impressive collection of abstract art. This also offers visitors the chance to create their own masterpieces in the workshop.

Furthermore, the city of Groningen is surrounded by lakes where you can sail, canoe, or swim in summer. 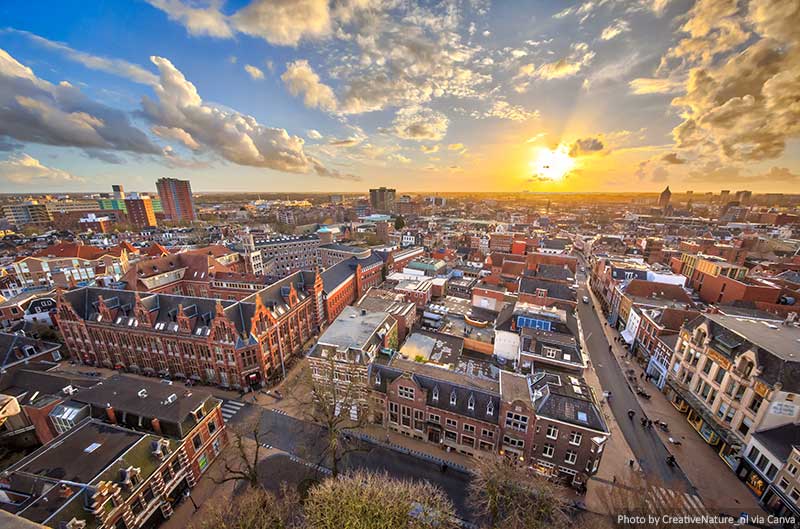 Breda was on the frontline of several wars, and therefore its heritage is mostly displayed through castles and other defensive works. A stroll in the old town learns that Breda is full of history, and arguably a highlight is Breda Castle. This fortress was built in the 13th century, and it played a significant role when the Spanish invaded the Netherlands around the 17th century.

Another brilliant piece of architecture is Bouvigne Castle, a large 15th-century mansion with gorgeous gardens to explore. 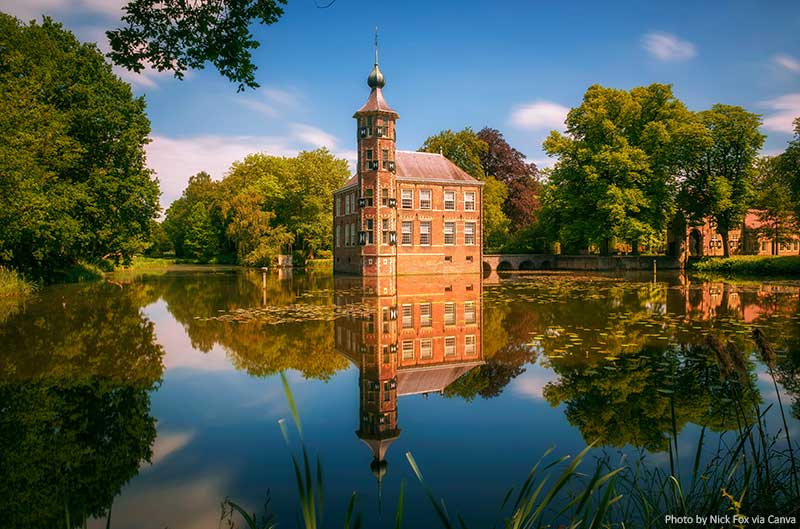 The Hague (Den Haag) is the political centre of the Netherlands; all ministries and a couple of royal residences lay within the city’s borders. It’s no surprise that the highlights of this coastal city include the stunningly designed Peace Palace and the Binnenhof (Inner Court), home to the chambers of parliament.

Visit the Mauritshuis with its collection of paintings by Dutch masters like Rembrandt and Vermeer, or stroll through the Netherlands on a miniature scale in Madurodam. In this fun park, well-known landmarks from all over the country are recreated in a mini world. 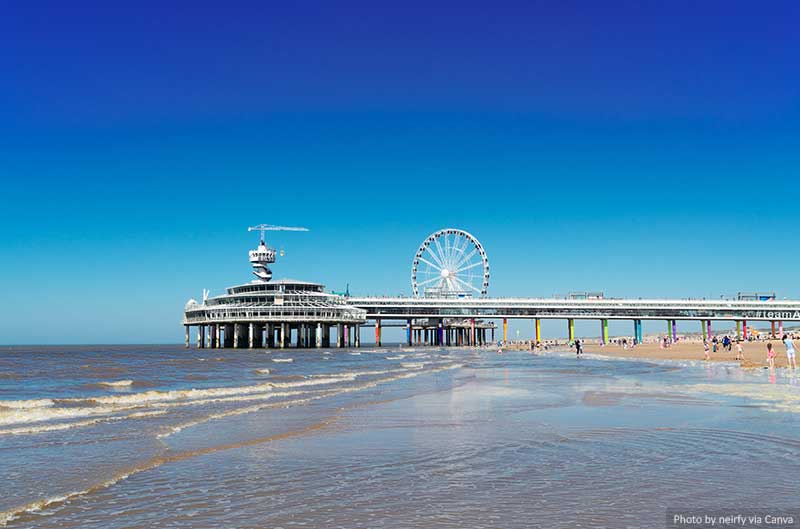 Conveniently located between The Hague, Rotterdam and Utrecht, Gouda is an attractive destination for a day-trip. Narrow canals, a charming city hall, and the lively square in Gouda’s heart; this old municipality has a lot to offer. Come here on Saturdays, when stall owners spread out their goods and delicacies on the central market around the city hall.

Of course, no visit is complete without having tried all sorts of cheese, Gouda’s most famous export product. This is also the birthplace of the stroopwafel, a thin waffle filled with caramel syrup – a treat loved by locals and tourists alike. The historic core of Gouda is quite compact, but the culinary and architectural factor are reason enough to drop by anyway. 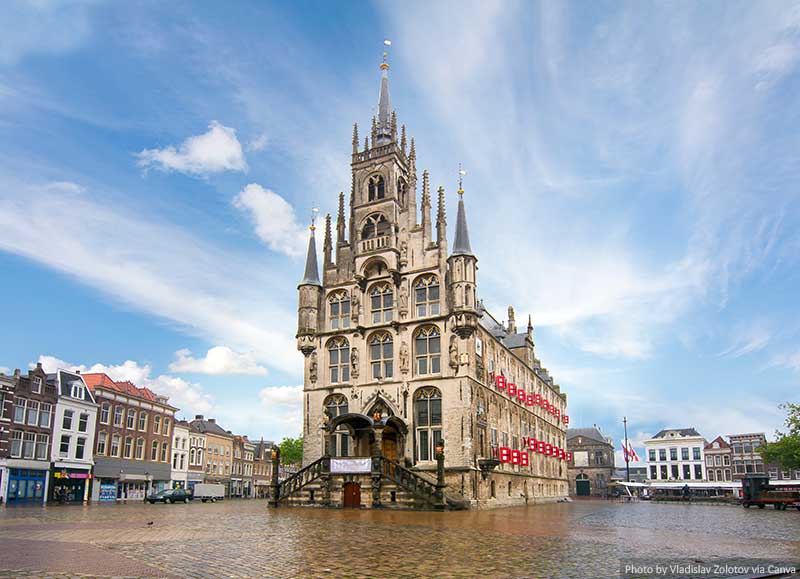 This southern Dutch city transforms into the epicentre of entertainment during the famous Dutch carnival. Still, apart from these extravagant celebrations, there’s plenty to explore in the town that dubs as Den Bosch. Pay a visit to St. John Cathedral, a massive gothic church that dates back to the 13th century. This makes it one of the oldest cathedrals in the country. Just outside ‘s-Hertogenbosch you’ll find the Loonse en Drunense Duinen, a picturesque national park with shifting-sand dunes and heathland.

Before hitting the road and continuing your trip through the Netherlands, sample the ‘bossche bol’. This is a cream-filled pastry that once was introduced by a baker from ‘s-Hertogenbosch. This is basically a gigantic, chocolate-covered profiterole; a hard to resist traditional snack. 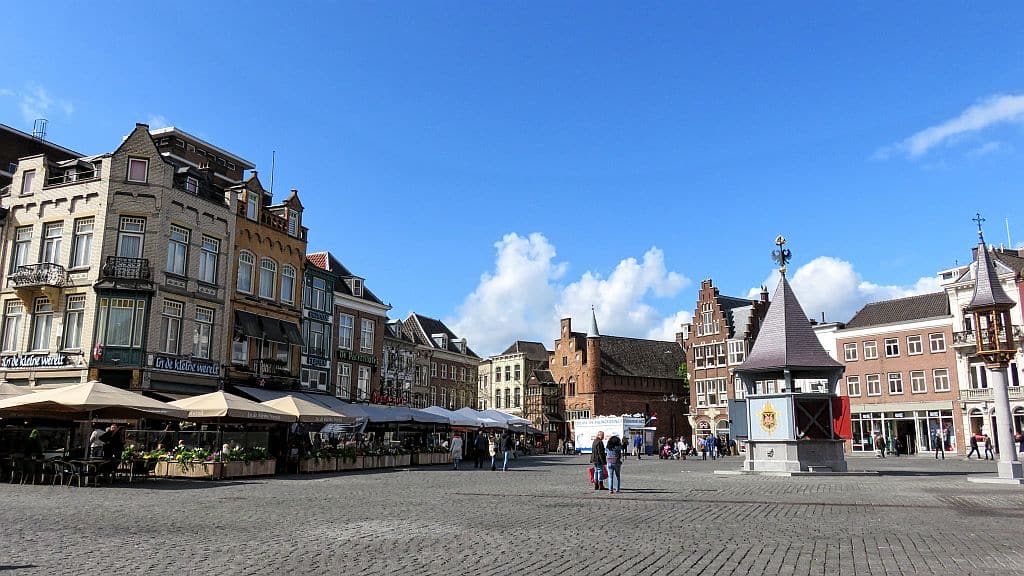 Maastricht has a deep-rooted past; it used to be a Roman settlement, and its history goes back roughly 2000 years. These days, Maastricht is a popular travel target among Germans and Belgians due to its southern location. The long history has left its traces in the centre, where the Basilica of Saint Servatius towers above all else.

Maastricht is an excellent stop for outdoor lovers as well. Take a mountain bike to the hills, go kayaking on the Maas river or explore the marlstone caves of Valkenburg. After a full day of fun, nothing beats a freshly tapped pint in De Gouverneur. This beer hall has over 300 speciality beers; the menu has been nicknamed ‘Beer Bible’. 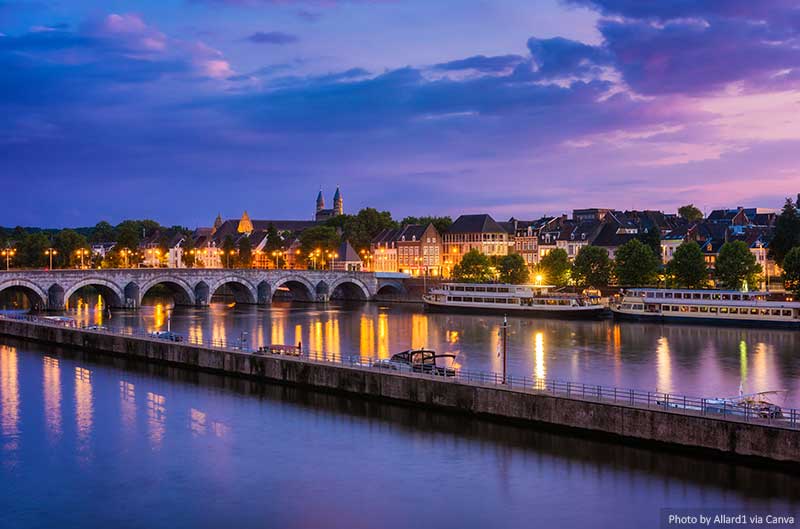 The popularity of the largest city in the Friesland province is skyrocketing; in 2018, Leeuwarden was the European Capital of Culture, drawing art lovers from all over the world to this northern town. Learn about the Frisian language, culture and history in the Fries Museum, capture the beauty of the Oldenhove leaning tower, or take on a bicycle or sailing trip through De Alde Feanen National Park. Leeuwarden also is the gateway to the Wadden Islands, an archipelago in the North Sea which is a beloved holiday destination. 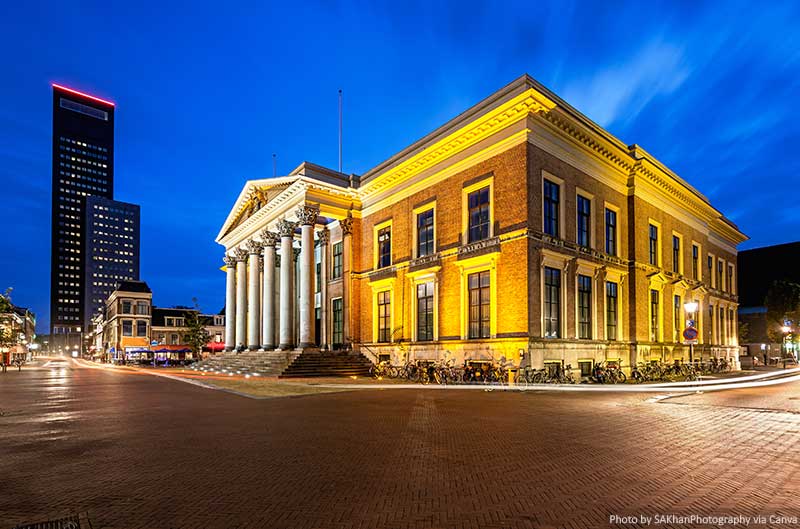 What Do The Dutch Eat For Breakfast?

Seven Reasons Why It Is Great To Live In The Netherlands

Why The Best Of The Netherlands Is Found Beyond Amsterdam