Holland is not particularly famous for their kitchen. But.. we do have some great foods you should try during your next visit! Will you let me know which one you liked most? 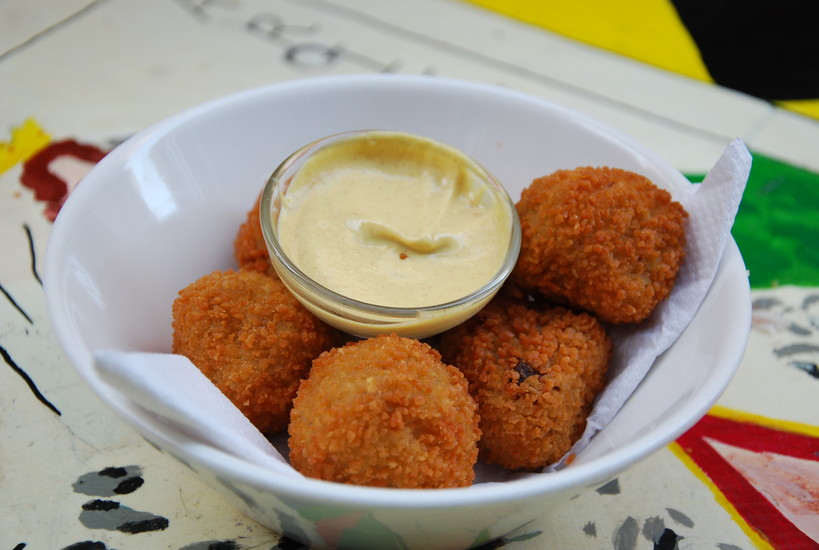 Bitter ballsMeat ragout balls covered in breadcrumbs, usually served with mustard. These snacks are served at formal and informal parties. You can order them almost everywhere! At a terrace, bar, snack bar or restaurant.

Gouda cheeseDutch people love their cheese. We are famous for dairy products and especially for cheeses. The vast majority of Dutch cheeses are semi-hard or hard cheeses. There’s a lot of choice. You can go for a neutral cheese or try a blend with herbs or spices. How about a cheese with cloves (usually the Frisian nagelkaas), cumin (most famously Leyden cheese), or nettles?

Boerenkool_stamppotCurly kale mixed with potatoes, served with gravy, mustard, and rookworst sausage. How does that sound for dinner? It is one of the oldest and most popular Dutch dishes. Boerenkool is high in carbohydrates, which makes it a popular meal for cold winter days.

syrup wafflesA true Dutch treat is the stroopwafel or caramel/syrup waffle. A thin wafer, made typically in a pizelle pan, sliced horizontally and used for sandwiching a layer of light caramel syrup. And yes, it tastes even better than it sounds!

You either love it or hate it! This famous Dutch sweet comes English liquoricein all sizes and flavours. The four types of drop are soft sweet, soft salt, hard sweet and hard salt drop. When they are flavored with coconut fondant they are called English liquorice. Other varieties are made with honey, mint, salammoniac, or laurel (laurierdrop). Typical shapes are diamonds, ovals, oblongs and as coins. 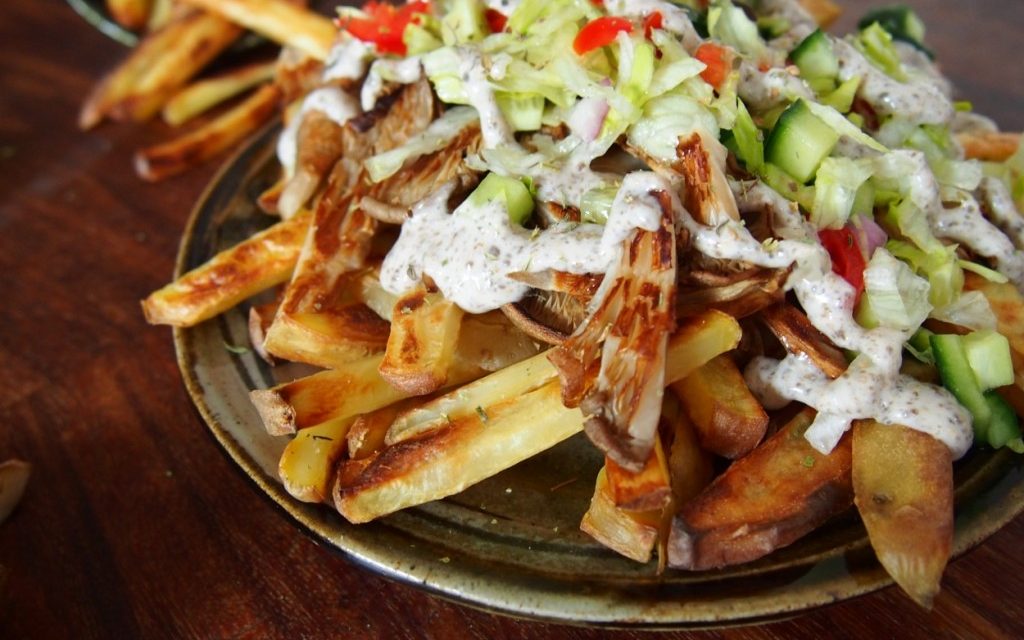 kapsalonA quite new addition to Dutch fast food is the kapsalon, translated barbershop, consisting of either shawarma or döner, and with fries, salad, cheese and various sauces, all put into one take-out box. It was named after the barbershop in Rotterdam that ordered this combination of foods as lunch. 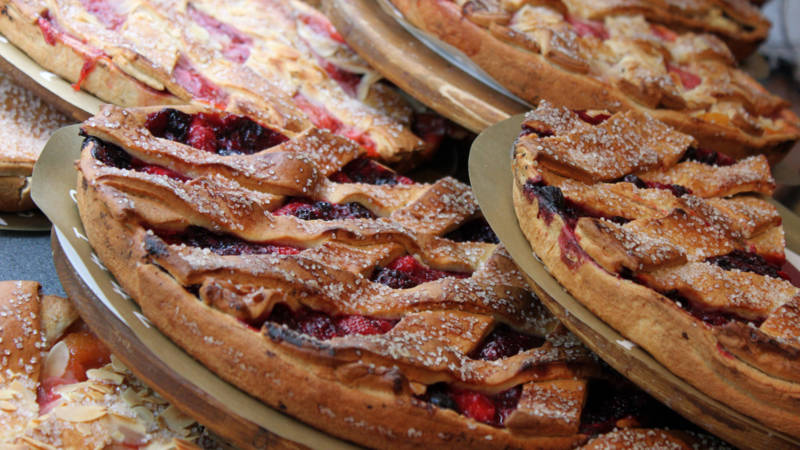 VlaaiVlaai or Limburgse vlaai is a pie or tart consisting of a pastry and filling. Vlaai is usually 27—30 centimeters in diameter. It is available in many different varieties of fruit fillings, such as cherry, apricot, strawberries, and plums. They are often eaten on life events, such as birthdays and funerals.

erwtensoepErwtensoep, also called Snert, is a very thick pea soup that can be served either as a main dish or as an appetizer and is traditionally eaten during the winter and especially during ice skating. It is customarily served with rye bread spread with butter and topped with katenspek, a variety of bacon which is first cooked and then smoked. The meat from the soup may also be put on the rye bread and eaten with mustard. 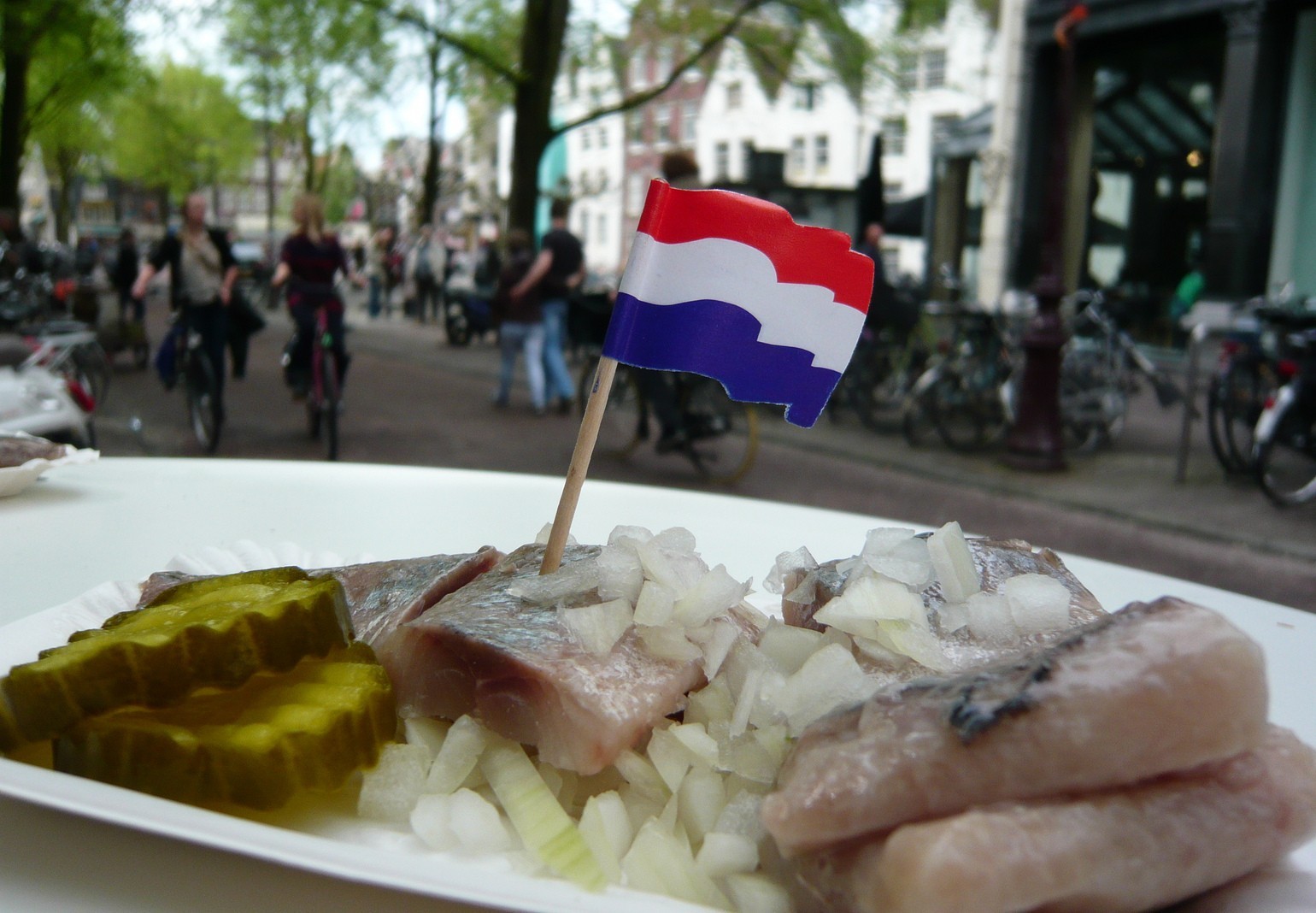 raw herringThe new herring season starts in June this year. What can you expect? Raw herring (called Hollandse Nieuwe / Dutch new), optionally served together with chopped raw onions and gherkins. People eat it in a special way; lifting the herring high up into the air by its tail, and then biting into it upwards. Do not eat the little Dutch flag. 😉 Raw herring is also commonly sold in a soft white bun.

10. Frikandel with peanut sauce and fries with mayonaise 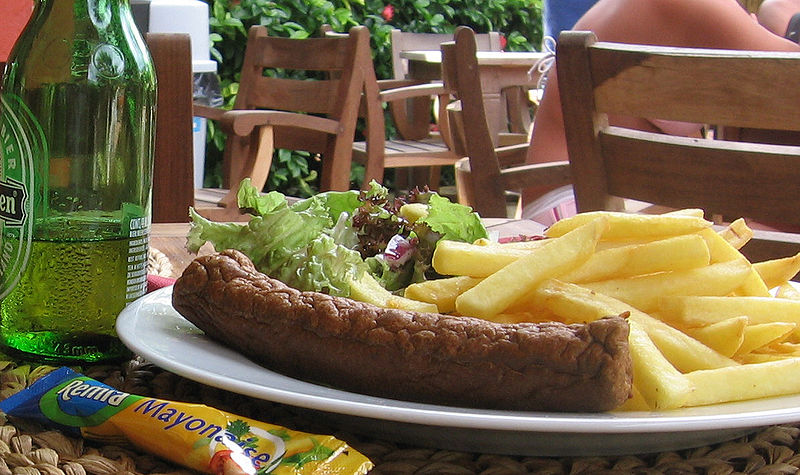 Frikandel friesA Dutch fast food meal often consists of a portion of French fries with a sauce and a meat product. The most common sauce to accompany French fries is mayonnaise while others can be ketchup or hot peanut sauce. Snacks made with meat are usually deep fried, this includes the frikandel (a skinless minced meat sausage). Dip it in the peanut sauce, you’ll love it! 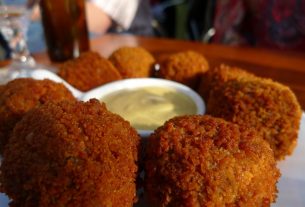 The Essential Guide To Dutch Borrelhapjes 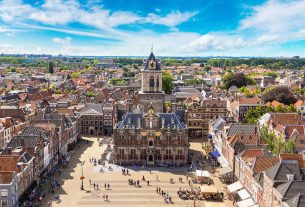 8 Places to Go in the Netherlands Beyond Amsterdam 8 Epic Places in the Netherlands Every Local Is Proud Of