As a city known for tiny laneways and concealed bars, Melbourne, Australia, has always had an element of mystery to it.

It’s no surprise that there are some amazing hidden places in Melbourne as well as “best-kept secrets,” if you will, both within the city center and outside of it.

Melbourne isn’t as much of a city of landmarks as many large metropolitan cities are, but it truly makes up for it in its unique character.

Within the last 26 years the city’s laneway culture has boomed, and with it has come dozens of hidden places, rooftops, and dungeons that require a bit of effort to discover.

Luckily I worked in Melbourne as a walking tour guide and bar tour guide for the better part of a year. So, I am well-versed at the best-kept secrets of Melbourne in the Central Business District and beyond.

In addition to some of the main viewpoints and tours in the city, you will find TONS of lesser-known places to explore.

Here are some of my favorites.

The Old Melbourne Gaol (old spelling of ‘jail’) is one of Melbourne’s lesser-known tourist attractions and is tucked away within a college campus that was built around it.

First constructed in 1839 — just four years after the city was founded — and operational from 1842 until 1992, the gaol is both creepy and historically fascinating.

You can find the gaol by walking through the RMIT campus to the courtyard in the middle.

What is now a college events courtyard was actually the site of dozens of hangings while the gaol was in service.

You can enter the gaol for a small fee and learn about its history, how it used to operate, what criminals were kept there, and even the logistics that went into hanging them. Some parts you might want to close your ears for.

The famous criminal and convicted police murderer, Ned Kelly, was kept and hanged there, which is a big draw for many people who visit. 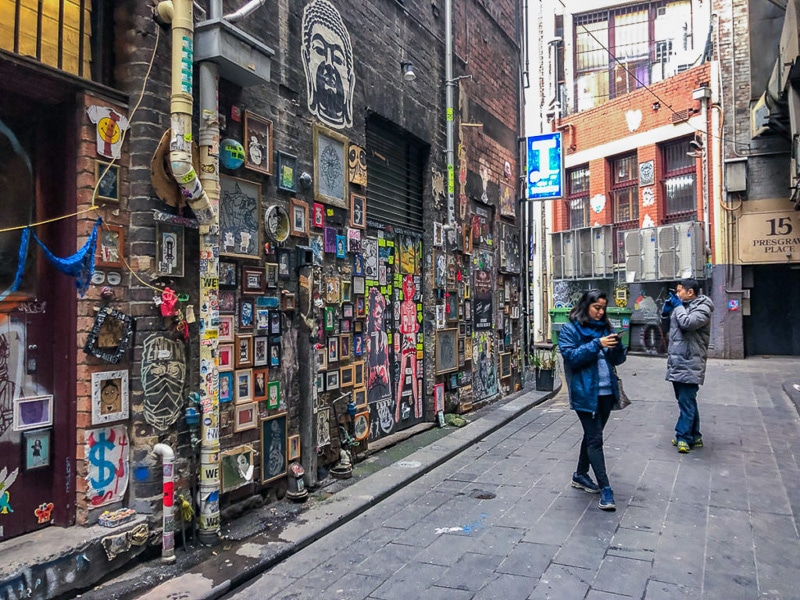 This laneway is home to the famous tiny “Bar Americano…” capacity: 12! Photo by Kimmie Conner

If you love the idea of secret places to visit in Melbourne, you should know the city may just have the best hidden bar scene in the world.

Melbourne has dozens of hidden bars, ranging from bars that are actually fully secret and concealed behind something to bars that are simply a bit tougher to locate from the street.

I’ve detailed every single one I know in my comprehensive Melbourne Hidden Bars Guide, but I’ll detail a few of my favorite best-kept secret hidden bars below:

STATE OF GRACE/FALL FROM GRACE

Yes, Melbourne actually does have a secret behind-a-bookshelf bar, and this hidden gem is as cool as it sounds!

You can reach the secret bar, Fall from Grace, by locating a book of the same name inside the bar, State of Grace, and pulling it.

This opens a secret door to a cocktail bar below, which has a cool Great Gatsby speakeasy vibe. Their classic cocktails are not to be missed! 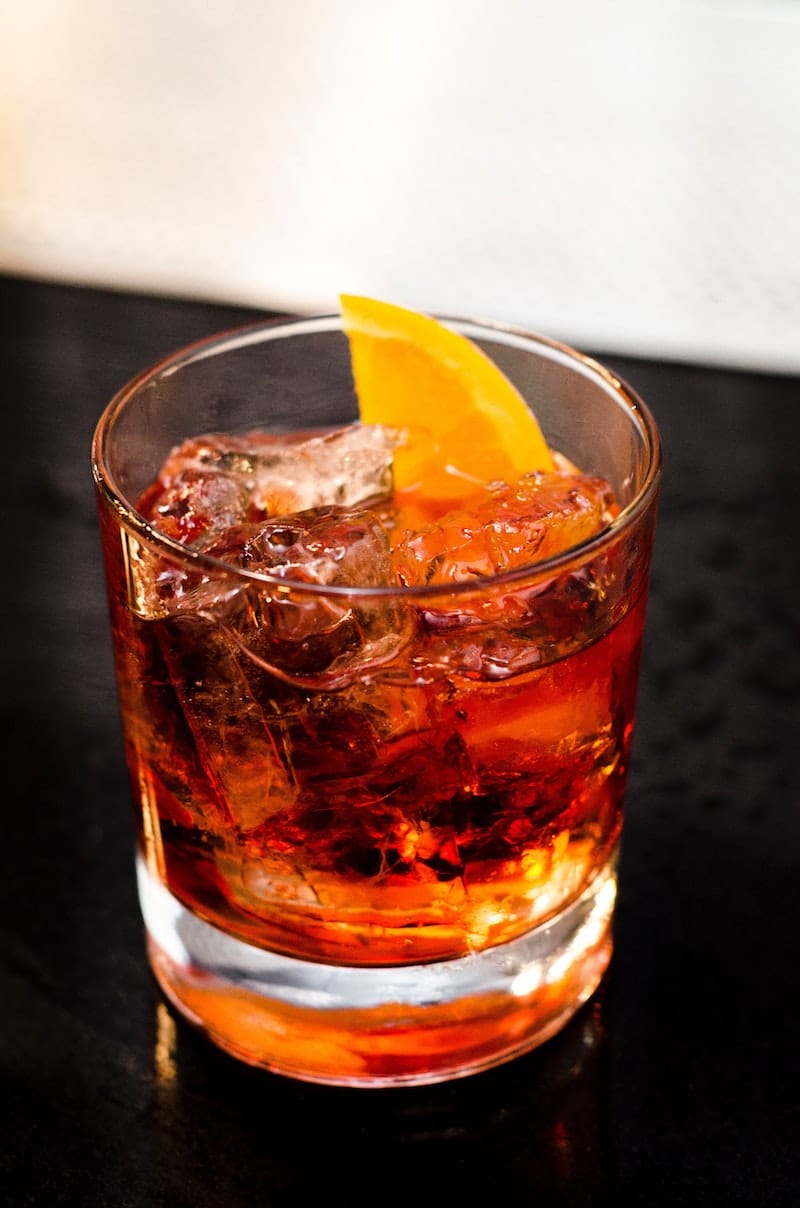 To find it, you must locate the decorative-looking wardrobe in the bar, open its door, move the clothes to the side, and…

A door will open revealing a staircase to the secret bar below.

As with the other secret bars on this list, the cocktails are delicious. Come just for drinks or enjoy Trinket’s tasty food menu, particularly the pizza!

The Croft Institute is perhaps the creepiest bar in Melbourne. You will have to navigate to the very end of two completely deserted laneways to get to this bar, which is actually themed like an old abandoned mental hospital.

Yes, you read that correctly.

This venue was the first of the laneway bars in Melbourne!

One of the gorgeous Yarra River Trail walks. Photo by Kimmie Conner

Many people take a Yarra River Cruise or perhaps walk next to the Yarra River on Southbank.

But what many don’t know is that if you follow the Yarra River inland, heading east, from the CBD, you can find some of the most incredible and scenic hiking trails around.

I recommend meeting the Main Yarra Trail in Richmond, Abbotsford, or Kew for some riverside walks that make you feel miles from the city — even if you can occasionally see glimpses of its skyline on your walk.

This is one of the top free things to do in Melbourne, for sure! 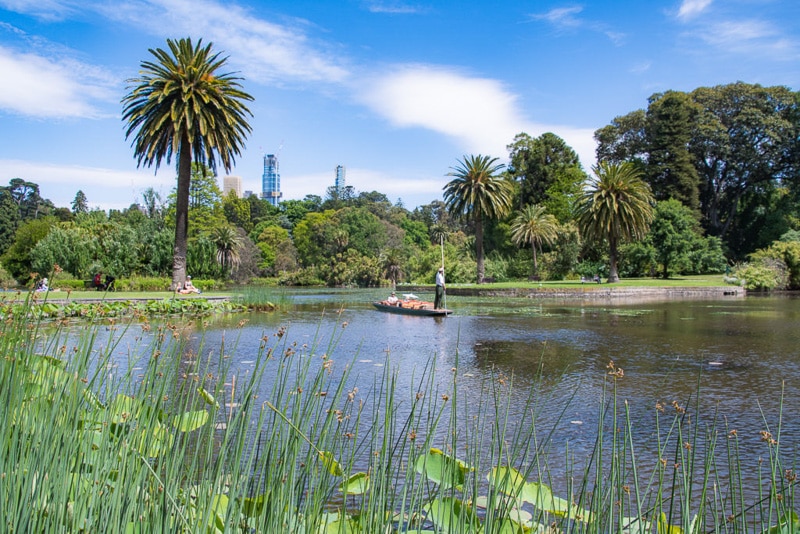 Punting on the lake on a beautiful sunny day. Photo by Kimmie Conner

4. PUNTING ON THE LAKE

This hidden Melbourne experience is actually hiding in plain sight right in the middle of the city’s gorgeous Royal Botanic Gardens Victoria.

One of the most unique experiences in Melbourne, “Punting on the Lake” is a wonderful old-fashioned tour around the Botanic Garden Lakes in a wooden punt boat.

The guides all wear old-fashioned striped attire and push your boat around with a long stick while giving you a tour of the lake’s ecosystem and wildlife.

Oh, and you will use wooden parasols to shade yourself on a hot day. Fancy!

Some of the truly hidden places in Melbourne are the infamous and mythical storm tunnels.

Legend has it that there are dozens of miles of storm tunnels underneath the city and its surroundings, connecting the whole thing underground.

These tunnels shuffle rainwater from the rooftops to rivers and storm drains, but that doesn’t mean that curious adventurers haven’t tried to explore these mysterious hidden tunnels.

There are crazy travel stories of groups disappearing into these tunnels when water levels are low to hold group meetings, secret explorations, and even raves, and many groups still claim to be active today.

Some well-known storm tunnel entrances are covered in graffiti along the Yarra River, but be careful, it’s illegal to go inside! 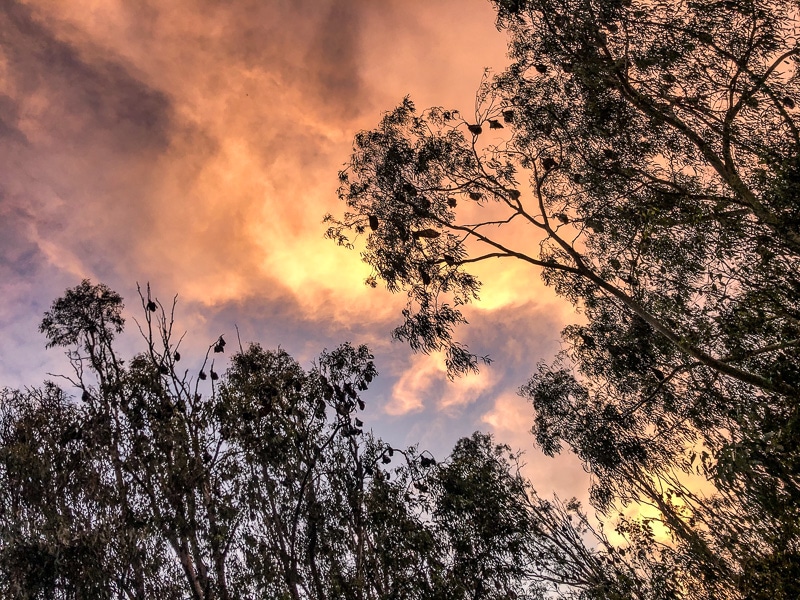 If you look closely, you can see the silhouettes of some flying foxes awakening for the night! Photo by Kimmie Conner

Many people don’t know that there is a colony of flying foxes, which are basically massive fruit bats living along the Yarra River in Kew. This is indeed one of Melbourne’s best-kept secrets as I only found out about it in my last month living there.

In the summer months, the colony can reach 50,000 bats — yes, you read that right. The bats hang out around a square kilometer of distance along the river.

When the sun sets, however, the bats come alive.

You can see them flying around for their evening meal, playing with each other in the trees, and squealing as they awaken for the night. It’s honestly one of the more interesting wildlife displays around the city.

Oh, and if you climb up the hill from the Flying Fox colony, you can reach one of the best views of the city skyline at Yarra Bend Park! 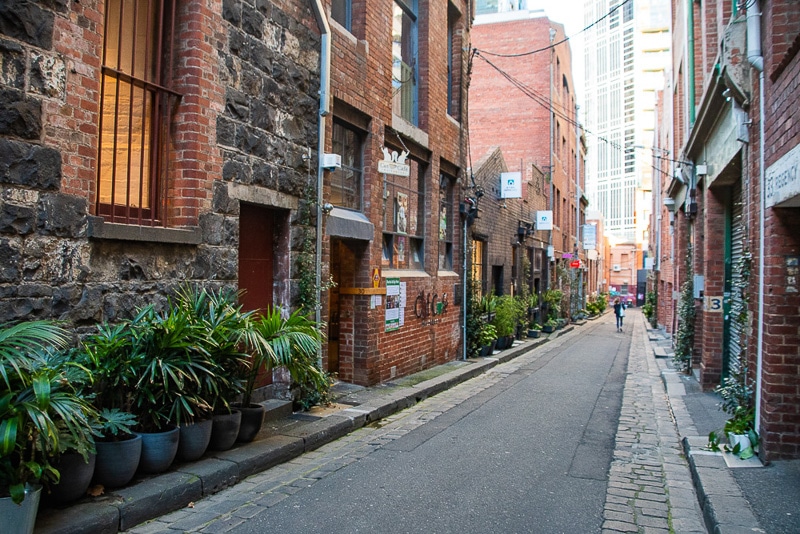 If you find this laneway, you’ve nearly found the Cat Cafe! Photo by Kimmie Conner

Yes, Melbourne does have a cat cafe — and it is truly hidden in the CBD!

You’ll have to locate a tiny laneway called Guildford Lane that gives rise to three more brick laneways, one of which is home to the cat cafe (pictured above).

You wouldn’t believe you’re in the middle of the center of a metropolitan city here.

Like the laneway outside, the cat cafe has brick walls and the feel of an old warehouse; which is because, well, that’s exactly what it is. What was once a lane of factories is now hidden cafes and venues, like the cat cafe.

Have a cuppa and cuddle some lovable fur balls right in Melbourne’s city center! 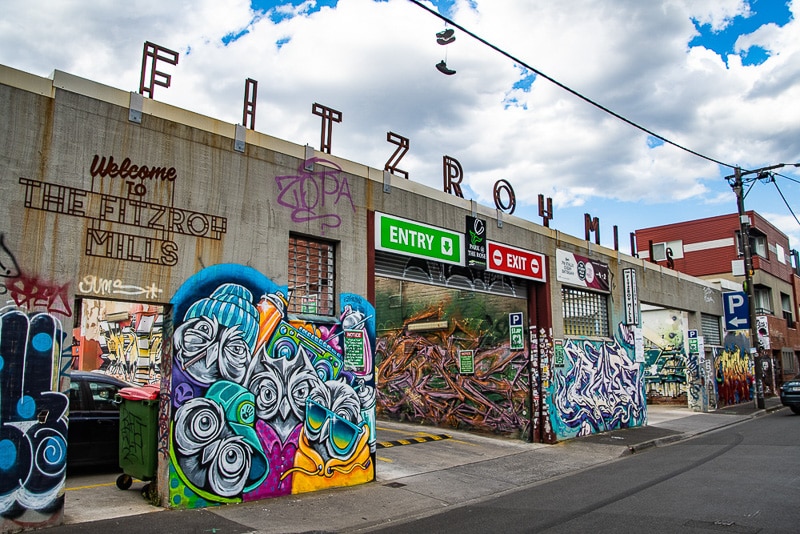 The colorful Fitzroy Mills Market in a parking structure. Photo by Kimmie Conner

Fitzroy is well-known to be the hipster part of Melbourne. It has trendy eateries, edgy bars, and lots of colorful street art.

Many people choose to walk down Brunswick Street to experience Fitzroy — which is a great way to check out bars and restaurants, but the most authentic Fitzroy experience comes out on Saturdays at a few different art markets that take place off the main drag.

Check out the Rose Street Artists’ Market and the Fitzroy Mills Market to get a taste of the thrifty back-alley street art vibes that Fitzroy grew from.

These markets are tucked away in the northern part of the suburb, right in the areas where there is vibrant street art around every corner and in every alley and parking garage. 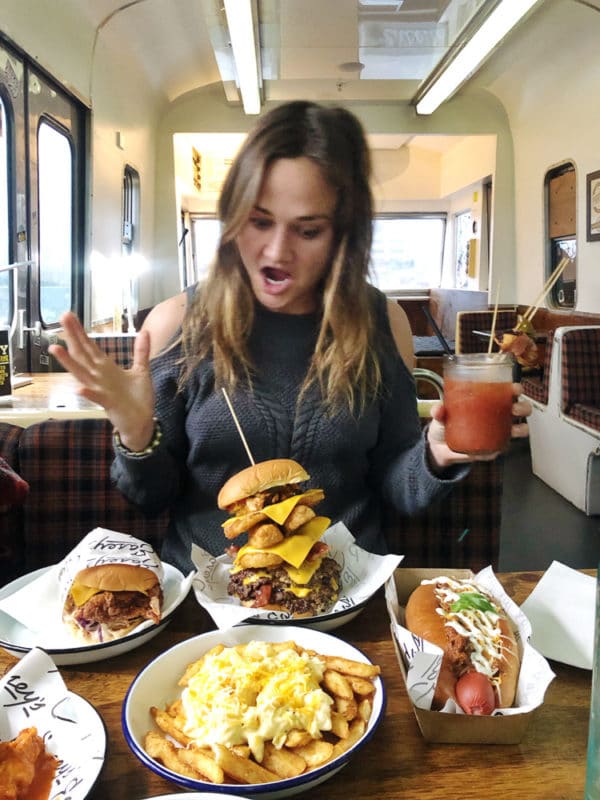 THIS is the burger I was talking about – and me! Don’t worry, I had plenty of help for all this food. 😉

Spending some time in Fitzroy?

Another amazing Melbourne secret is finding your way to Easey’s Burgers.

This epic burger joint took three old train cars, placed them on a roof in Collingwood — located about a 10-15 minute walk from the markets above — and opened a restaurant inside.

The burgers, hot dogs, wings, and mac-n-cheese are outstanding, and the view is even better. It’s definitely one of the most unique Melbourne eateries — and there are many!

Make sure to try their burger challenge. If you can finish the Metropolitan Mayhem Burger in a certain amount of time, it’s free.

But trust me, it’s not easy to finish a burger that involves multiple patties, cheese, dim sims, bacon, potato cakes, and… do I need to go on?

See the photo above for a visual! 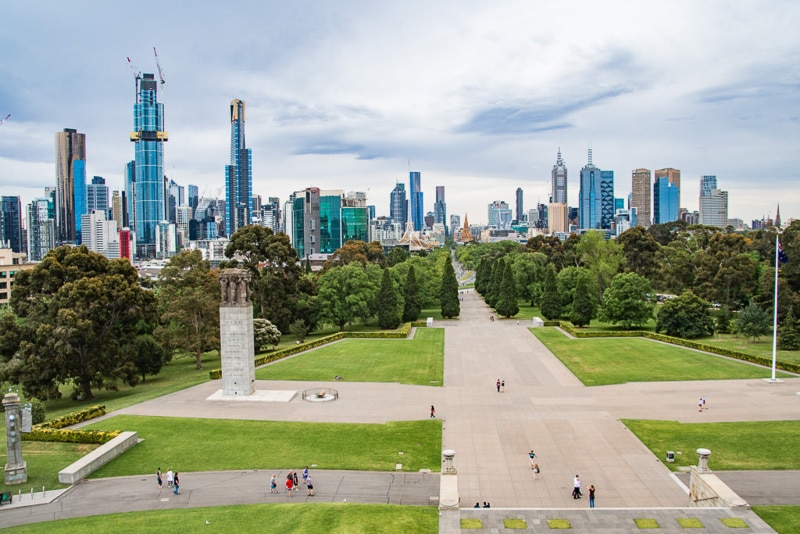 My favorite view from the Shrine of Remembrance. Photo by Kimmie Conner

Sure, many people pay to go up to see the view from the 88th floor of the Eureka Tower. But, in my opinion, the other best and most underrated view in Melbourne is actually from the Shrine of Remembrance.

The Shrine of Remembrance is a massive concrete memorial that represents Australia’s role in WWII; however, it has exhibits on any War involvement Australia has had since becoming a country in 1901.

In terms of design, the multi-story memorial is centered around a tomb with flags and other war memorabilia, with a massive underground museum below and a lovely balcony you can climb up to, as well.

The hidden part of this attraction is that it’s a great place to visit whether you are into military history or not.

If you climb up to the balcony on the 3rd or 4th story you will come upon an incredible uninterrupted view of the city skyline.

This view is extra special because you can see the city behind the beautiful green trees and grasses of the botanic gardens. I’ve never seen more than a couple of groups of people up here at a time!

Well, that’s about it for some of the best-kept secrets and hidden places of Melbourne. I hope you enjoyed this Melbourne local guide and can discover these and even more in this wonderful and ever-mysterious city.

Do Crocodiles Swim In The Ocean In Australia?

What to Wear When Travelling in Australia

18 Australian Sayings That Make No Sense To Other English Speakers