Geography: Focal point of design and culture in Central and Southeastern Europe

Graz, with a population of 300,000 (450,000 in the greater area) is the second-largest city in Austria and the capital of the federal state of Styria. Due to its key location, the city functions as a supra-national cultural centre and a gateway to South-Eastern Europe and in particular to the EU countries Hungary and Slovenia. The city’s wide regional appeal can be directly correlated with the continuing steady rise in its population: Between 2002 and 2006, a total of roughly 20,000 new residents were registered in the Graz urban area. 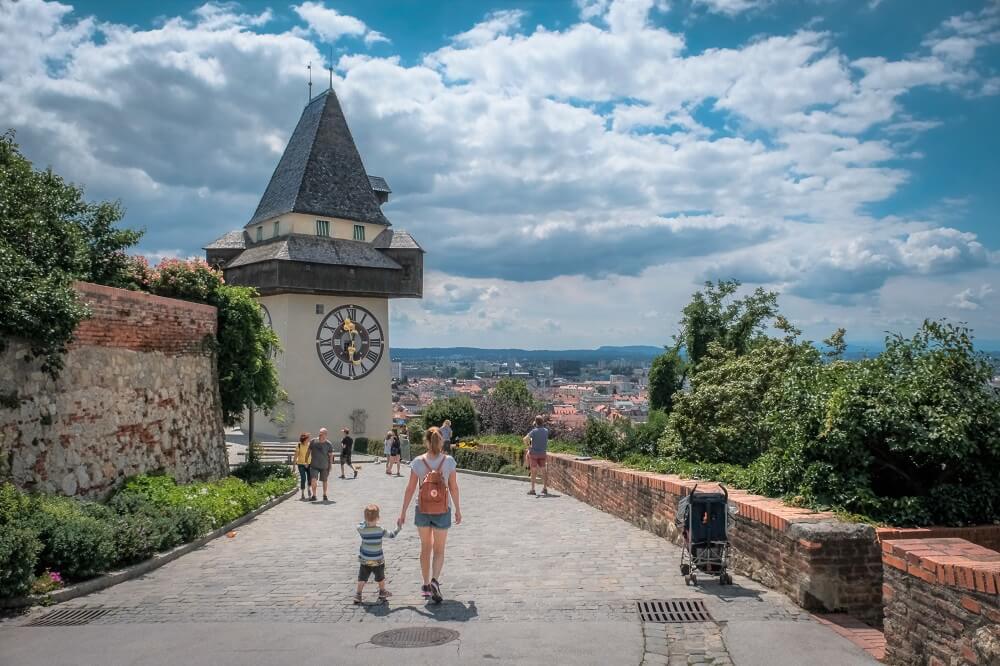 The old town of Graz, designated as UNESCO World Heritage in 1999, exemplifies the city’s unique cultural status: Typical buildings from different epochs and in different architectural styles co-exist in harmony and make Graz a focal point of many different cultures, styles and ideas—confronting old and new in a very visually appealing way. Throughout its cultural history, Graz featured an atmosphere of openness and diversity. At the beginning of the 1960s, a breath of fresh air hit the open spaces of the city: The energetic avant-garde movement initiated a new tradition of interventions in public space, pioneered by the Forum Stadtpark and the avant-garde festival steirischer herbst. As a result, the people of Graz are now thoroughly used to encountering art and design in public places, anywhere and anytime. One of the most important focal points for both culture and tourism in Graz is the city’s picturesque Old City. The neatly arranged old buildings with their red brick roofs and the narrow cobble-paved alleys create a fascinating, serene atmosphere almost reminiscent of an open-air museum. But quite the opposite is the case: The Old City of Graz is a stimulating, active, living space, buzzing with events, culture and people. It’s the place where old and new bonds and—emerging from the tension between historic calmness and contemporary audacity—creates an exciting intermixture of experiences and encounters. 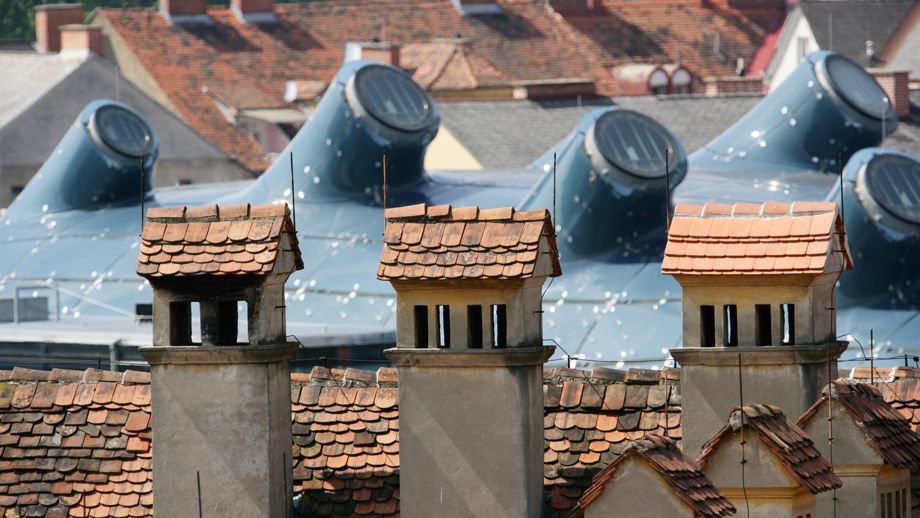 There are many reasons for tourists to name Graz as one of their favourite destinations: The Inner City’s unique architecture attracts buzzing crowds from all over the globe, including guests from overseas and the Far East. Graz also harbours various culinary delights, including wine: The city is in the near vicinity of the widely known and beautiful wine-growing district in Styria. The constantly growing visitor numbers bear witness to an increasing interest in the city of Graz: With a growth rate of 2.2%, not only the central Graz area but also the city of Graz itself are among the Austrian leaders. Almost half of the visitors come from Austria, but the city is also particularly popular with the German and Italian neighbours and welcomes guests from China and Japan as well. In addition, Graz is a popular destination for conferences, seminars and fairs. These account for 12% of all overnight visitors, making a total of approximately 100,000 overnight visitors annually. One of the reasons for the high popularity of Graz as a conference city lies in the easy access to the event locations. 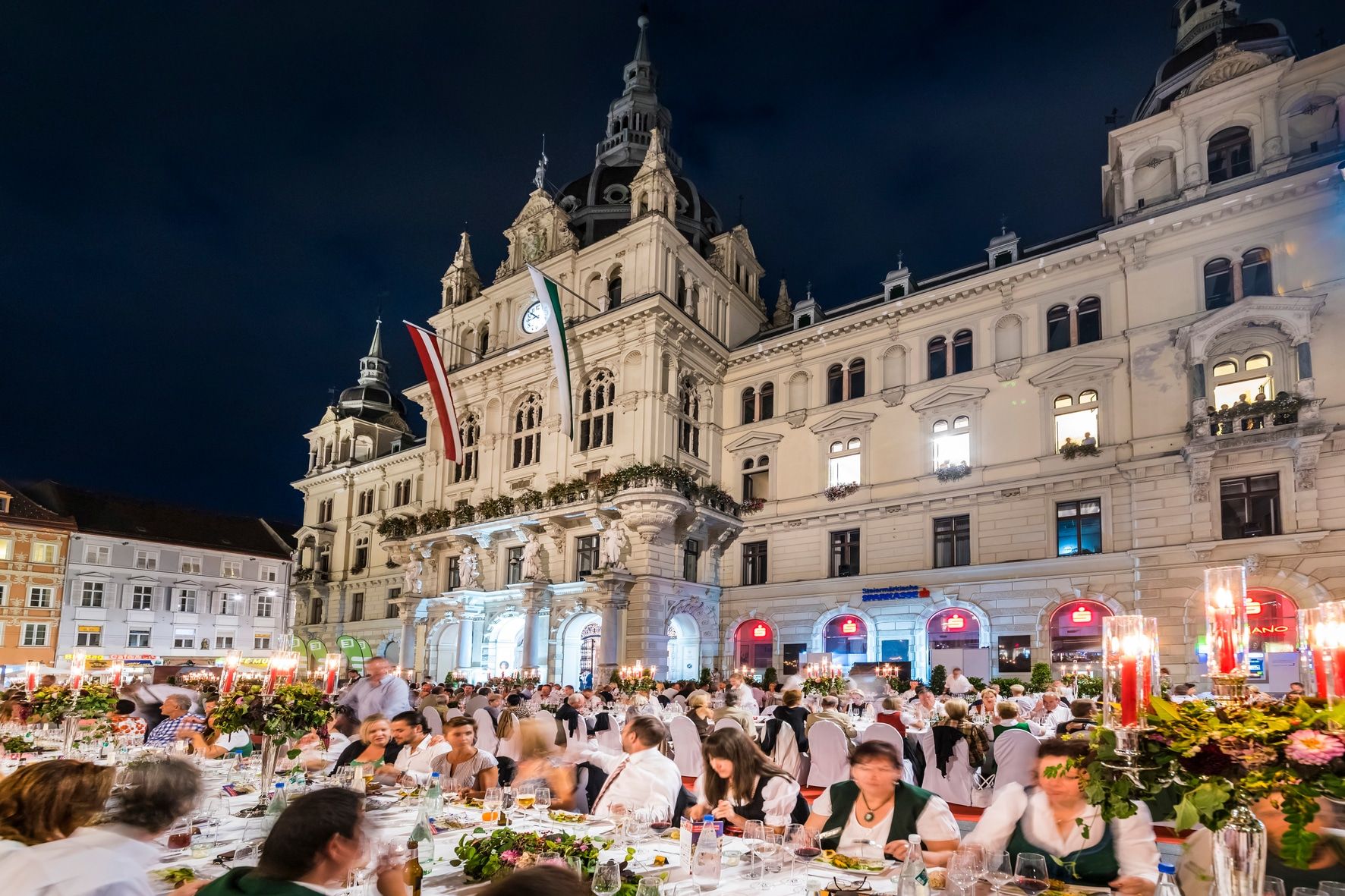 In the city of Graz, more than 10,500 businesses are employing over 180,000 people. The area’s solid commercial foundations are made up of energetic small to medium size enterprises and a strong trading and service sector. The industrial sector ensures a substantial, direct creation of wealth. The creative industries enjoy particular attention: They make up one of the fastest growing economic sector in Styria. Many various commercial sectors such as manufacturing and trade, industrial art and commerce are directly linked to the prospering creative industry. Its important status as a cross-sectional matter holds the key for Styria’s economic policy.

What design means for Graz

According to an online-survey of Joanneum Research, one of the biggest research centres in Styria, in 2010, design is clearly the strongest area of Styrian creative economy with a contingent of 50 %, followed by the areas art, culture and music as well as media. In the Data pool of the Creative Industries Styria—the largest online account of the Styrian creative economy—there were 850 entries of creative professionals residing in Graz on June 30th 2010. Graphics design, architecture as well as promotion and communication design make the biggest part of the Graz Design scene, followed by information design, web design and multimedia & screen design.

Design Month is an annual culture festival functioning as an image and awareness campaign aiming to shift design from the margin of collective attention directly into the centre of public awareness. Every year, Design Month puts on in Graz—and indeed throughout Styria—a packed programme involving a variety of activities and a broad spectrum of different design sectors, ranging from architecture, product design, furniture design via music to fashion. Creative Industries Styria GmbH is a network company for the development and consolidation of the creative economy in Styria. Its brief is to coordinate, expand and position the broad range of creative services in the overall context of the Styrian economy. One of the top objectives of Creative Industries Styria is positioning Styria as a hotspot for creative talents. This means setting up general conditions in the region that have the momentum to attract creative people from Austria, Europe and all over the world. 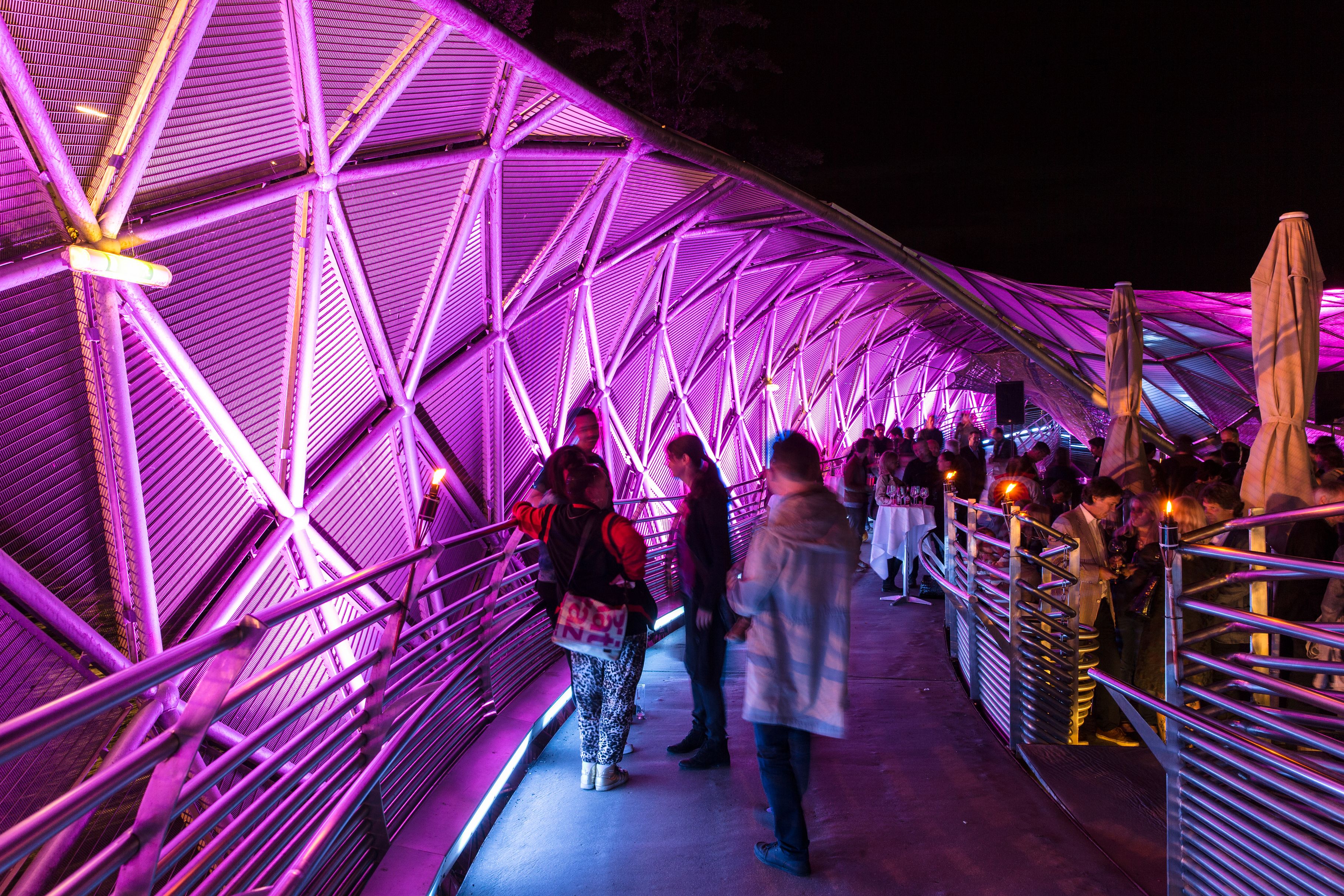 Graz is very proud of its great variety of cultural highlights. The city features a wide range of museums and exhibitions covering various topics, from contemporary art to history, technology and science. Schloss Eggenberg with its “Alte Galerie” features paintings and sculptures from the Romanesque to the end of the Baroque period. The “Neue Galerie” focuses on visual arts from the 19th and 20th centuries. The Kunsthaus Graz—a unique contemporary build often mentioned as “Graz landmark number two” after the Schlossberg— , featuring an exhibition hall of contemporary art, opened its doors in 2003. The architectural pièce de résistance of Graz’s year as European Capital of Culture has since become an attraction for art lovers and the culturally minded from all over the world. Founded half a century ago, in 1958, the Forum Stadtpark represents a highly active and innovative network of and for artists from various fields. There are several exhibitions covering various fields of history, technology and science located in Graz: The “Landeszeughaus” features medieval armoury comprising 32,000 pieces of armour and weaponry—the largest museum of its kind in the world. The “Tramwaymuseum” showcases 40 historic trams, the oldest dating from 1873.

Graz has extensive experience in organizing and implementing design-related exhibitions, events and festivals. The most important of these are the design festival assembly, springfestival, La Strada, steirischer herbst, styriarte, Lendwirbel, Europrix and Design Month. Every spring, they present contemporary design to a broad public, thereby raising the awareness of design. The assembly festival for example has had an international reputation for years, and as a consequence international designers from countries such as Slovenia, Croatia, Bosnia, Bulgaria, Hungary, the Czech Republic and Latvia enrich it with their presence. Fashion has always played an important part at assembly, and since 2009 there has been an important prize for fashion designers. springfestival celebrates the music Zeitgeist by bringing together live acts, DJs, hip bands and emerging artists. For four days, the whole city becomes one big stage, Graz’ most unique spots are being transformed into festival venues, including a dome carved into the rocks of the Schloßberg, the landmark hill of Graz. steirischer herbst—“Styrian autumn”—is a very special avant-garde festival celebrating art in its various disciplines. Thanks to the link-up of aesthetic positions and theoretical discourse, steirischer herbst features a broad mix of artistic expressions and provides deeper insight into art and its connections to everyday life. Evolved from the local art scene, steirischer herbst takes productive advantage of Graz’ unique geographic location, attracting artists and theorists from the neighbouring Eastern European regions. The La Strada festival focuses on street and puppet theatre. It is the only festival of its kind in Austria. Taking place at the beginning of August, this special colourful event attracts around 140,000 visitors every year. The venues are the city’s streets, squares and alleys themselves, but Graz Opera and Dom im Berg—a dome carved into the rocks of the Schlossberg—feature shows as well. 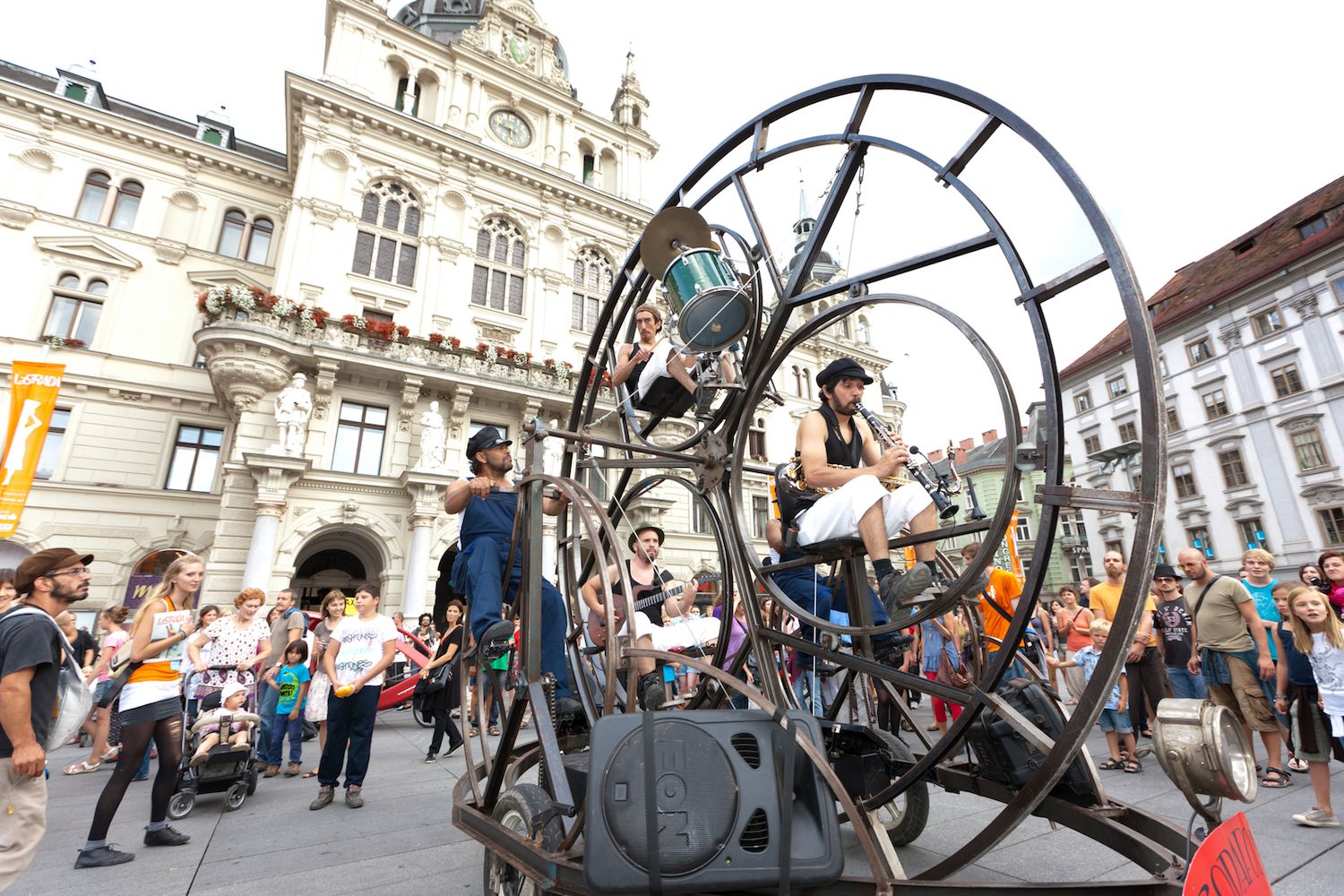 Behind the boom in the creative economy there lies a change of social and economic paradigms. The industrial society is giving way to a knowledge-based society, and a wide range of players with all sorts of backgrounds are involved in it. Industrial designers are also modern brain-workers just like “creative engineers”, who combine maximum technical expertise with unconventional approaches to solutions and thus create products and services that make people’s lives more pleasant, easier or simply just nicer. The common understanding of design as being only a distinct small leg of the way from the idea to the final product—usually perceived as the middle section between the birth of an idea and the design concept being fleshed out—is not thoroughly thought out. Design should be recognized as a way of thinking permeating the whole process, from the beginning to the end. Design is the hub of creativity where the three key elements of a modern society— economy, politics and science—meet and, by establishing mutual dependencies, generate innovation and quality.

The quality of life is a great motivation for being in Graz—and especially for staying there. People of all ages value the large proportion of green space (over 40%), and the short distances making everything within easy reach. Living in Graz means enjoying diversity. The relationship between high culture and subculture is agreeably balanced, which is particularly attractive to young people. Individuals, particularly participants in the creative scene, unaggressively but firmly take the room they need to unfold their creativity. It is no mere chance that more and more creative businesses have settled in the area around the Kunsthaus Graz, benefiting from the revival of an area that had previously been considered rather rundown. Numerous cafés and clubs are now part of the urban landscape around the Kunsthaus.

7 Things to Know Before Traveling to Austria