Despite its relatively small size, Austria is rich with history and culture – which is highlighted by the following maps.

Austria’s central location and its historical influence has made for a fascinating history.

As can be seen with the above map, the current Austrian borders have only come into effect comparatively recently, after the fall of the Austro-Hungarian Empire.

From population density to Nazi occupation – and of course the inevitable comparisons with Australia – these maps shed a little bit of light on historical and modern Austria.

Where do you come from?

Austria’s strong economy and central location mean its an attractive location for foreigners.

Between 20 and 25 percent of Austrian residents were born in another country. This includes people who have acquired Austrian citizenship.

Around half of those who live in Austria but were born elsewhere come from EU countries.

The following map – based on official government statistics but put together by Austrian Maps – shows where people living in Austria were born, including those who were born in Austria itself. Austria’s ethno-linguistic composition a century ago

While modern borders have largely set ethnic and linguistic boundaries in Central Europe in stone, the following map shows just how different this was in 1910.

Ethnic and linguistic Germans can be seen spread all across the regions, concentrated of course around Austria, although there are pockets as far away as Transylvania (modern Romania).

The map, which has been put together under a Wikicommons licence, comes from research by William R Shepherd, who published his book Distribution of Races in Austria-Hungary in 1911. Austria under Nazi rule, under the Allies and in the present day

After Austria’s Adolf Hitler rose to rose to the position of German Chancellor in 1933, he set his sights on reunifying Austria with Germany, known as the Anschluss (Annexation).

Under Nazi rule, Austria’s German name – Österreich, which means eastern realm – was replaced by Ostmark, which sought to highlight the eastern march of the Third Reich towards its inevitable victory.

The following map shows Ostmark in 1941, including the seven Reichsgaue, i.e. states. Austria as ‘Ostmark’, as it was known under the Nazis. Image: Wikicommons/

This map shows how Austria was divided by the conquering Allied powers: the United States, France, the United Kingdom and the Soviet Union.

As had been done in neighbouring Germany, Vienna itself was also divided between the four conquering powers. Finally, these are the current state borders for Austria.

As can be seen in comparison to the above map, the state borders are largely similar to the occupied Allied zones, other than the eastern part of Tyrol. Changing lanes: When did each Austrian state switch from left to right-sided traffic?

Fortunately for tourists and Austrians alike, the entire country of Austria – including each and every one of its nine states – drives on the right hand side.

It might surprise you to learn however that this was not the case as recently as 100 years ago.

The Austro-Hungarian Empire drove on the left-hand side, largely in resistance to Napoleon and his army, notes the British Motor Museum.

When Napoleon moved through Europe, the countries he conquered became right-hand drive. Those countries which were proudly unconquered, drove on the left to thumb their nose at Bonaparte and his forces.

As a consequence, half of Austria – the half which had been invaded by Napoleon – drove on the right, while the other half drove on the left.

After the Austro-Hungarian empire dissolved, gradually different states converted to right-hand drive, although this took place over a relatively long period – although of course regular commuting from one state to the other was comparatively rare at the time.

As can be seen in the following map, Vorarlberg made the switch in 1921, but it was not until 1938 – when Austria was invaded by Germany – when Vienna finally made the switch. When Austria swapped from left-hand drive to the right. Image: Tubs/Austrian Maps/Wikicommons

For a relatively small country, Austria has dense urban and rural areas – and pretty much everything in between.

The following map, put together by Yale academic Michael Gastner, shows the population density of each Austrian state.

Tyrol and Carinthia are on the other side of the equation.

Austria is frequently compared to Australia. 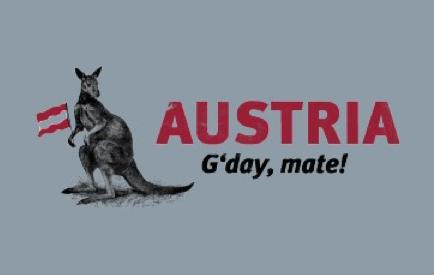 These comparisons are due pretty much to how similar the country’s names are, with the countries not similar in most other ways.

One example is size. The following map has Austria superimposed onto Australia – which a) shows just how different the countries are in size and b) otherwise serves very little purpose at all. And then there are some maps which are just plain silly.

The following map, courtesy of Twitter page Austrian Maps, provides a handy perspective on which parts of Austria are Innsbruck – and which parts are not. For anyone wandering through the wild ravines or urban landscapes of Austria, keep this map in mind whenever you need to know if you’re in with the Innsbruck crowd – or not.

Austria is the true centre of Europe

Throughout its history, Austria has represented the centre of Europe when it comes to things like culture, language, wealth, power and influence.

The following map however shows that Austria also sits at the geographic centre of Europe, with the country placed along the axis of proximity between Istanbul and London.

In fact Vienna – which considers itself the centre of Austria despite being up towards the top corner – is almost split by proximity between the two metropoles of European culture and history. 11 Most Beautiful Lakes In Austria, Did You Know Them All

11 Best Places to Stay in Austria

Five Things You Will Love & Hate When You Visit Salzburg