Jutting out of the desert landscape in the Northern Territory, Uluru is sacred to Indigenous Australians. The awe-inspiring World Heritage Listed monolith is recognisable throughout the world as an icon of Australia, but how much do you really know about Ayers Rock? Read on to discover 12 facts about this fascinating natural landmark.

Uluru has not one but two World Heritage Site listings. In 1987, UNESCO listed Uluru as a natural World Heritage Site in recognition of its unique geology and in 1994, Uluru was listed as a cultural site due to the significance it has for local Indigenous Australians. Uluru is one of the few places in the world to hold a rare dual-listing.

From faraway Uluru seems smooth, but upon closer inspection the rock formation is very rough with rugged slopes, ridges, grooves, canyons and caves spread across the surface. Aboriginals believe that the imperfections in the surface texture signify the journeys of their ancestors. 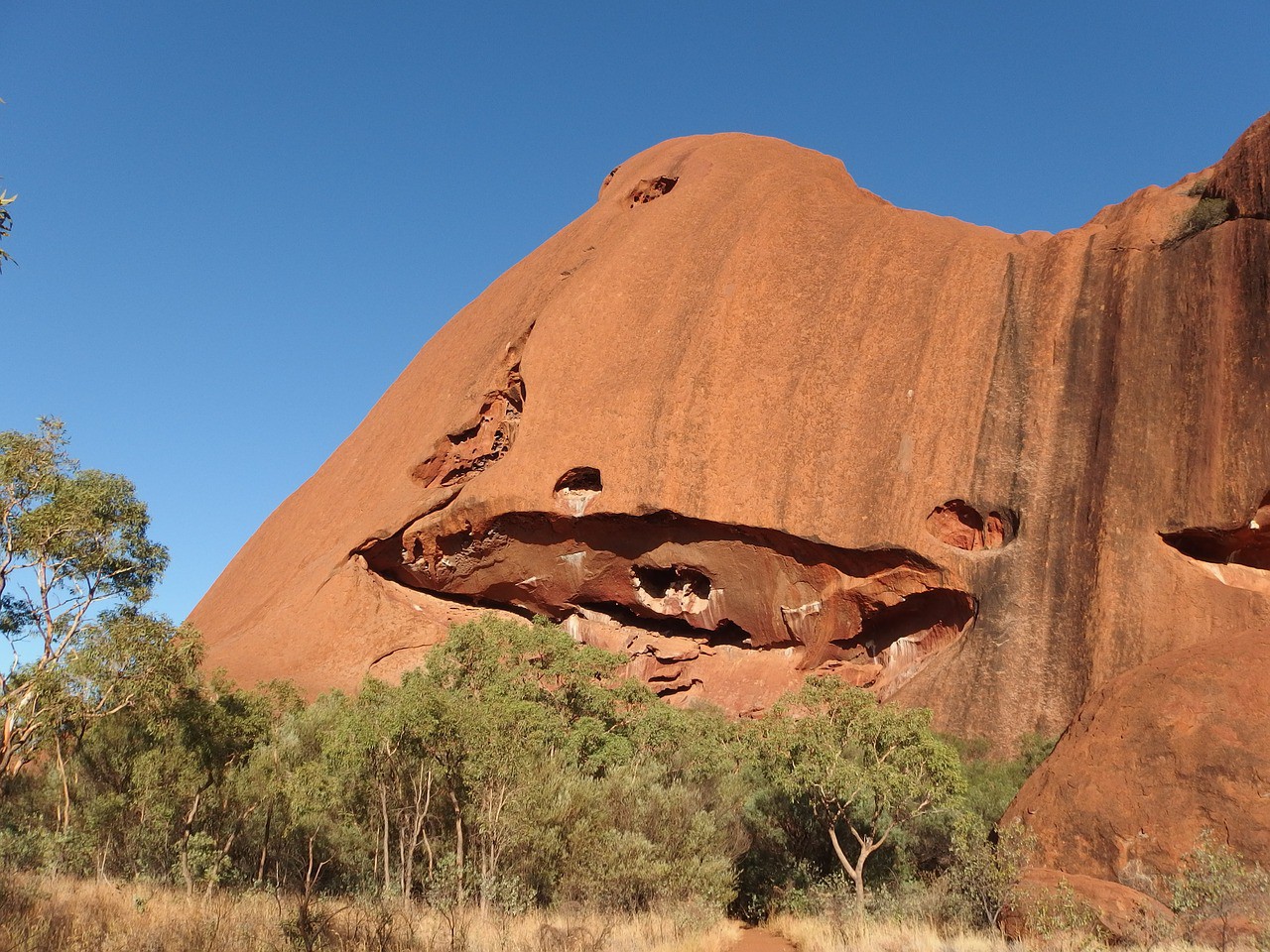 Origin of the name Ayers Rock

On July 19th 1873, surveyor William Gosse became the first foreigner to lay eyes on the rock formation. He named the landmark in honour of Sir Henry Ayers who was Chief Secretary of South Australia at the time. The name Uluru comes from the local Anangu, the Pitjantjatjara people.

Prince Charles and Diana, Princess of Wales climbed Uluru when they visited in 1983, although the local Anangu people have requested that people don’t climb the rock as the path crosses an important dream time track associated with Mala ceremonies. The Anagu also feel a sense of responsibility when visitors die on Uluru and over recent decades, 36 people have died climbing. 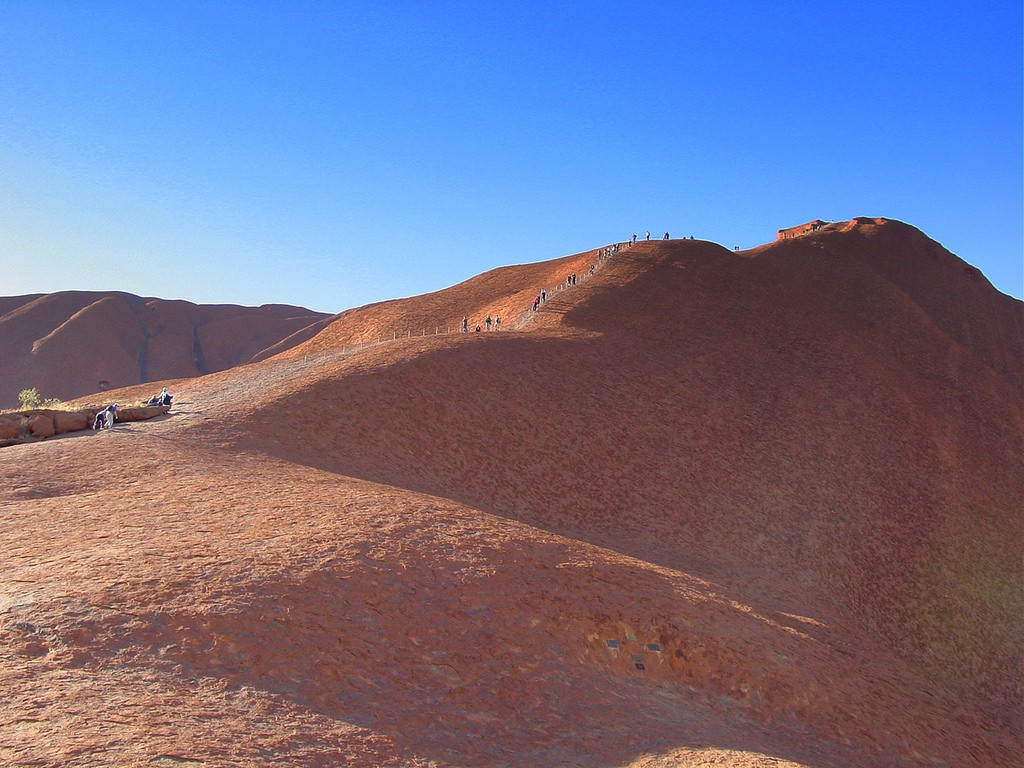 We Who Did Not Climb… | © F Delventhal/Flickr

In photographs and postcards, Uluru seems isolated in desert surroundings, but in reality the monolith is neighboured by Kata Tjuta. Considered even more sacred than Uluru, Kata Tjuta, or the Olgas as they are also called, is comprised of 36 domes, parts of which are off limits.

Composed of arkose sandstone, Uluru is naturally grey which is a far cry from the burnt orange colour associated with the formation. The distinctive hue is caused by high amount of surface iron oxidation. Uluru is also known to vary in colour depending on the time of day, progressing from red to blushing salmon, rust and everything in between. 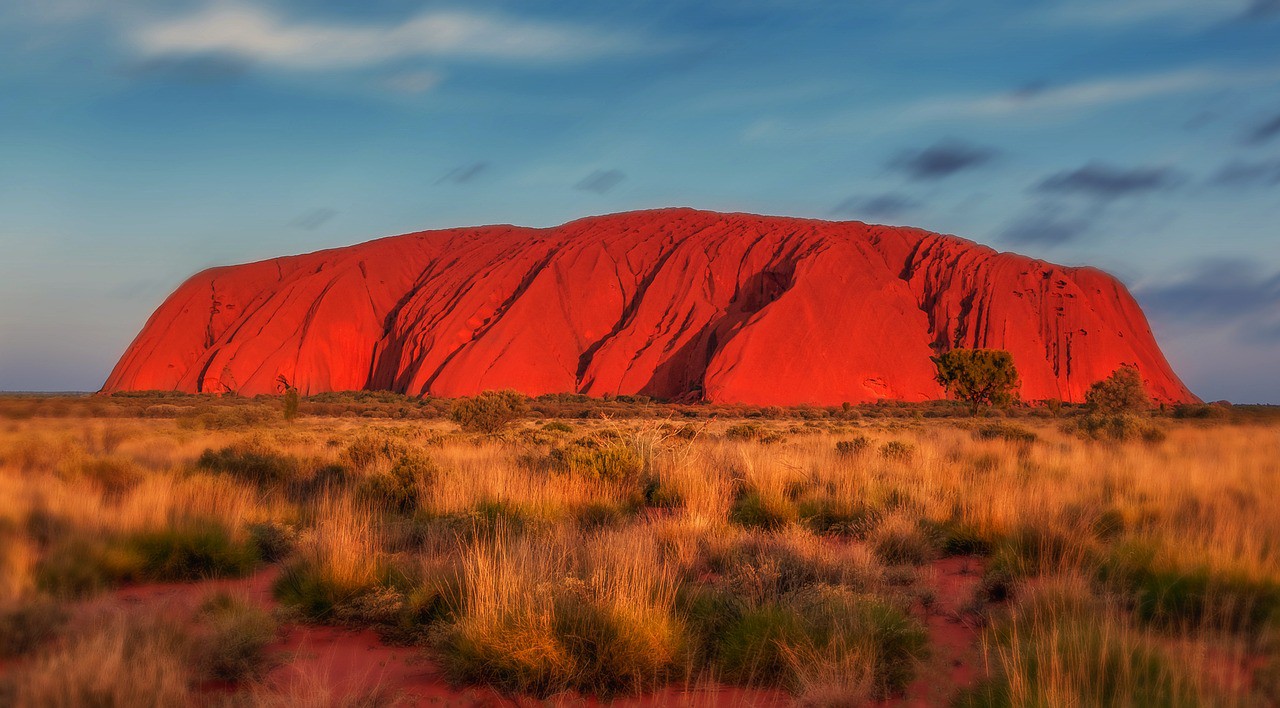 Just like an iceberg, the bulk of Uluru is below the surface. Millions of years of erosion have revealed only the tip and while it dominates the landscape at 348 meters high, Uluru extends a further 2.5 kilometres underground, although some experts estimate is could be closer to six kilometres. 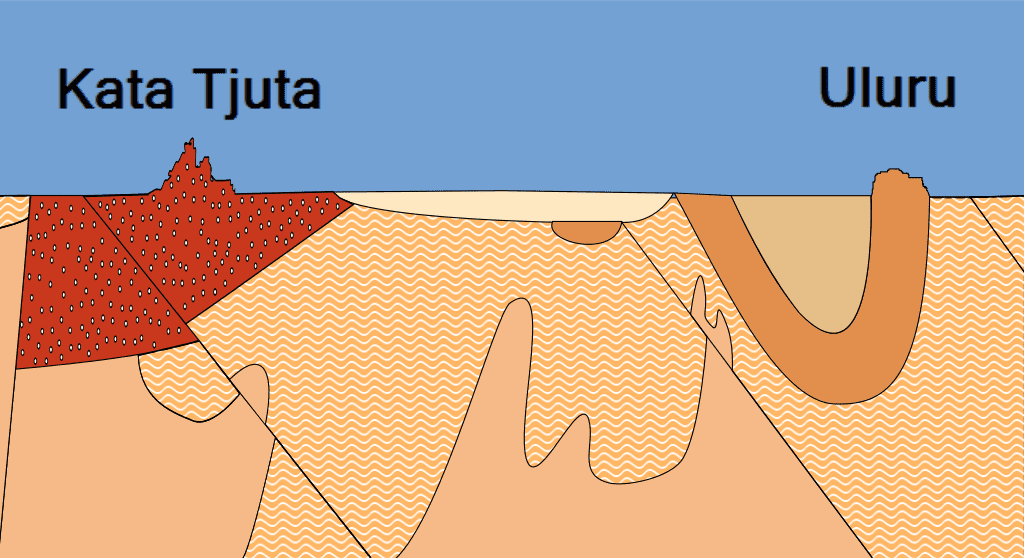 In the Neoproterozoic era, much of Australia was covered by the Centralian Superbasin, meaning that Uluru once sat on the seabed in an area called the Amadeus Basin. Millions of years of evolution have changed the Earth’s surface and nowadays, Uluru sits 863 meters above sea level.

It’s widely believed that Uluru is the biggest sandstone formation in Australia. However, that title belongs to Mount Augustus in Western Australia. The world’s biggest rock is approximately 860 metres high, 1,106 metres above sea level and is estimated to be estimated to be 1,750 million years old. 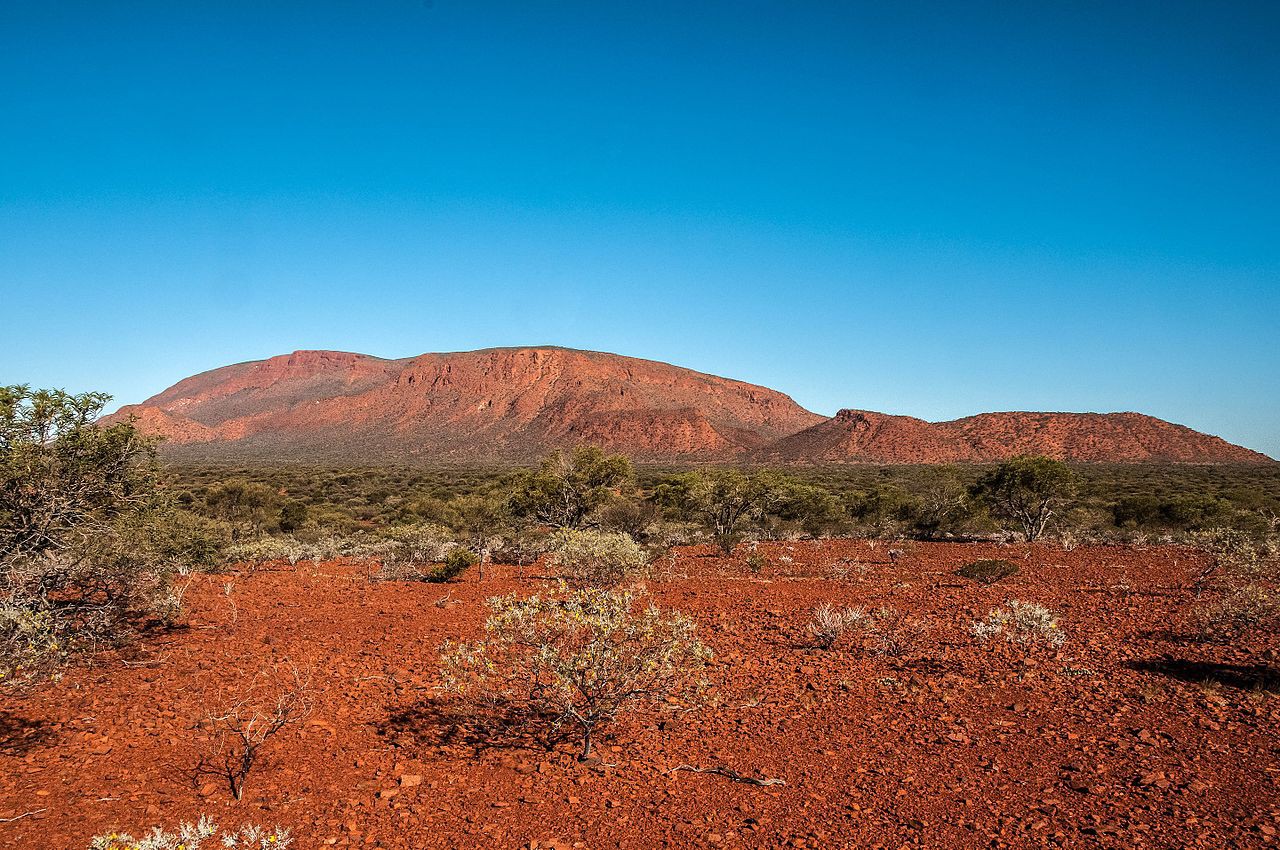 There are several rock art sites scattered across Uluru from the Mala Walk and Kuniya Walk, to Mutitjulu Waterhole which depict ancient stories. Traditionally, the rock art was created using natural minerals and incorporates symbols dating back 5,000 years including concentric circles and animal tracks. 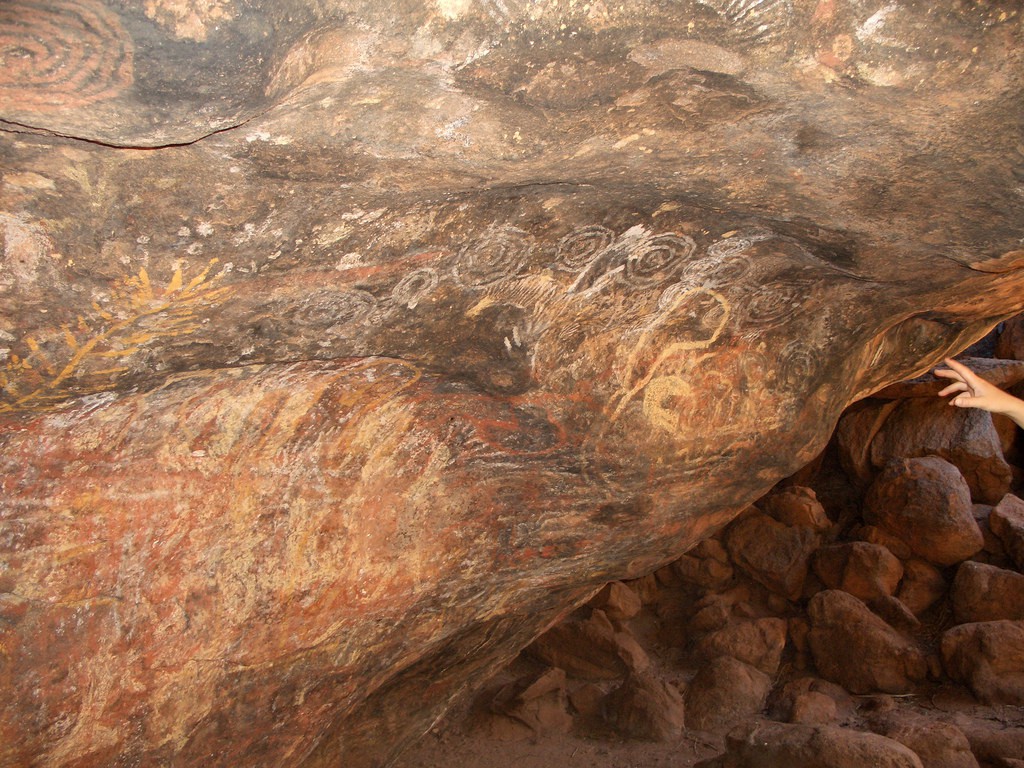 Uluru has photographic restrictions related to traditional Tjukurpa beliefs. The Anangu people request that visitors refrain from photographing certain areas associated with gender rituals which are forbidden ground for Anangu people of the opposite gender. Commercial photography is also highly controlled and permits must be purchased.

13 Things That Tourists Should Never Do In Melbourne

How To Spend 48 Hours in Sydney, Australia