Political correctness and closing the curtains were just two habits American expat Melissa Adams had to lose in the Netherlands.

Living in the Netherlands changes you in the smallest ways. Losing some of your foreign habits will certainly help you integrate better into Dutch culture.

In California, I thought nothing of jumping in my mini-SUV to drive three blocks to the nearest store for something small. Since totalling that vehicle in 2009 (long story), I haven’t driven a car. There’s also no need to drive in Amsterdam, a village built for horses, where bicycles outnumber people. Since the city is flat as a Dutch pannekoken, and parking is pricey as gold, everyone from CEOs to parents, kids and hookers rides a bike, rain or shine – or more likely rain, wind and more rain.

While many Americans spend hundreds if not thousands on bicycles that only leave the garage for weekend recreation, Dutchies commute on ‘beater bikes’ painted in garish colors to make them easier to find in a mile-high stack. Then they lock them up with industrial-size chains that could secure an army tank, although such tactics do little to deter thieves who naturally repaint their ‘new’ rides before selling them on the black market.

Despite their distressed looks, Dutch commuter bikes, omafietsen (grandma bikes) and bakfietsen (cargo bikes) are the epitome of function used for carting kids, groceries, plants and appliances, and often decorated with flowers to liven up their looks.

We Americans pay double digit interest on credit card balances, but Dutchies don’t spend more than they have. Debit cards are widely used and help people live within their means — or until their bank account hits zero. The net benefit is priceless freedom from credit card debt.

There’s no PC in the Netherlands, where everyone from the janitor to the CEO can and will criticise you. Dutchies are so direct they can come off as rude. Sufficiently angered, they’ll curse you with a deadly ailment – typhoid, tuberculosis, cholera, small pox, or The Big C. ‘Sterf aan kanker!‘ (Die of cancer!), they’ll shout, swearing by disease like no other nationality.

Yet although their lack of PC may irritate the thin-skinned, no one ever has to guess what a Dutchie is thinking.

Americans are known for leaving generous tips. Since restaurant staff in the US earn below minimum wage, waiters typically ‘brown-nose’ customers to earn a decent wage through tips. Dutch restaurant staff don’t go out of their way to insure prompt service; they’re paid adequately, so customers should be grateful they’re allowed in at all.

Amsterdammers are among Europe’s most fluent English speakers but the Dutch capital encompasses some 180 nationalities, including many Turkish and Moroccan residents, plus an older population with less polished English skills. In the Netherlands, just as in any foreign country, it’s rude to start blathering away in English before knowing what language your listener understands.

Dutchies are a punctual lot – and they expect the same of you. This became clear to me when a doctor explained ‘you’re sitting in someone else’s chair’ after I arrived 10 minutes late for an appointment.

Agendas are taken seriously in the Netherlands – and displayed prominently in bathrooms, where the inevitable ‘Birthday Calendar’ (De Verjaardagskalender) hangs. Ever frugal and efficient, Dutchies use these perpetual calendars, sans days or years, to avoid purchasing and updating a new one each year. Covertly erasing a few entries from one could wreak havoc in your Dutch friend’s life.

By Dutch standards, Americans are workaholics who slave 40+ hours, 50 weeks a year to earn two weeks of annual vacation. Europeans average 37.5 hours a week but Dutchies work only an average of 30.6 hours per week, the least in Europe.

Your Dutch date may greet you with the obligatory three kisses on alternating cheeks but don’t expect much romance after that. Plan to split the dinner bill while your sultry eyes compete for attention with the night’s Ajax match. On the upside, Dutchies are typically quite tall and well-built. If you cohabit with one, be sure to document every possession and bank account you have, as without a samenlevingscontract (living-together contract) you might miss more than romance.

Dutchies despise over the top behavior. ‘Doe maar normaal, dan doe je al gek genoeg‘ (Just act normally, that’s crazy enough) they say, reaching back to Calvinist roots that preach lack of flash and fanfare. That mindset evaporates on Koningsdag (King’s Day), when the orange garb appears and everyone in the Netherlands acts as crazy as humanly possible.

Again, it’s all about Calvinist roots and having nothing to hide. No matter what they’re doing or how intimate, true Dutchies keep the drapes open.

Many people in Europe don’t use a dryer for anything other than hair. Why use a fancy machine that requires expensive electricity when radiators and the wind provide the same function?

In sunny southern California, I owned one light coat that rarely came out of the closet. Given the damp, changeable Dutch climate, my wardrobe now includes an array of winter jackets, scarves, boots and mittens In all weights and colours. 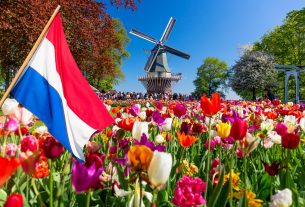 Why Is The Netherlands Also Called Holland? 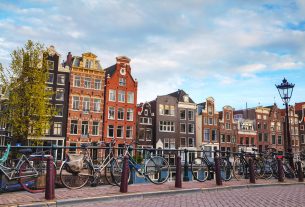 13 Reasons Why The Netherlands Will S.t.e.a.l Your Heart Forever

11 Reasons Why You Should Date a Dutch Person