Here, we take a look at 15 of the top spots that every traveler heading to this hearty corner of Western Europe should have on the menu.

Lets explore our list of the best places to visit in Ireland: One of the most visited natural attractions in all of Ireland, the Cliffs of Moher rise up from the swells of the great Atlantic Ocean like petrified bulwarks of stone.

On top, they are covered with the island’s trademark meadows of verdant green grass, while the waters of Galway Bay crash and froth against the stone below.

At a whopping 120 meters in height, these great cliffs offer dramatic views of the coastline and the Aran Islands out at sea, while an all-new visitors’ center makes it easy for travelers to uncover the hundreds of millions of years of geological history that helped form the stratas of sandstone and shale. While the small and welcoming town of Sligo packs a punch with its charming medieval core, arched stone bridges, lichen-spotted abbey and wealth of pretty 19th-century townhouses, it’s the backcountry of this one that really hits the mark.

Imbued with all the romance you’d expect of the place that helped form the legendary W B Yeats, this area of outstanding natural beauty rises to peaks with the mighty monolith of Knocknarea Mountain (the mythic resting place of Queen Maedbh), comes peppered with moss-clad, centuries-old cairn stones and makes for some truly breathtaking views over the pebble beaches and salt-sprayed towns of Sligo Bay. 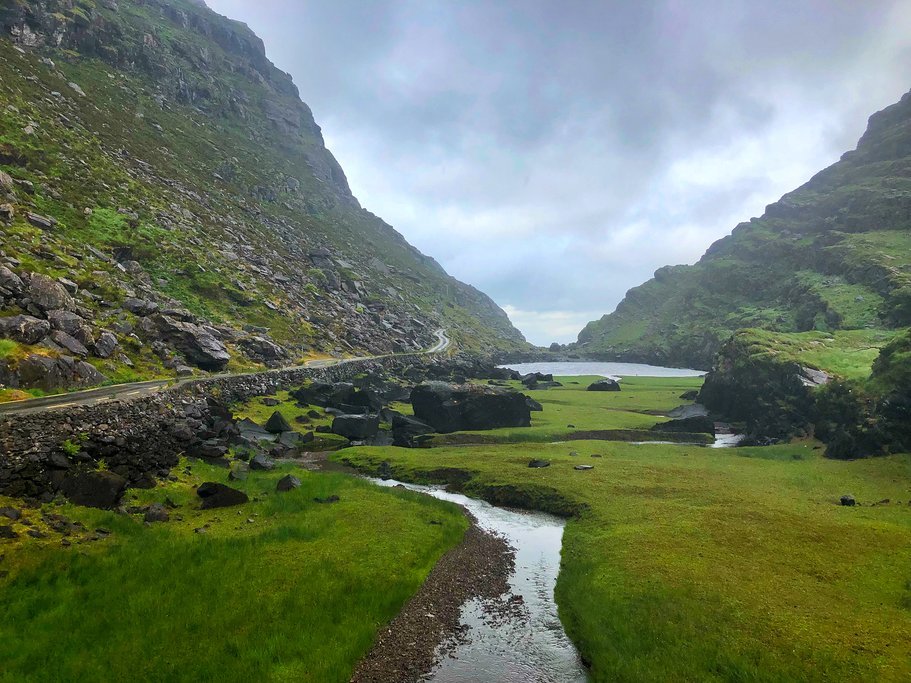 Nestled amidst the other much-vaunted natural treasures of County Kerry, the indelibly wild and untouched reaches of the Killarney National Park are surely worth a mention in their own right.

Attested by UNESCO and trodden by herds of majestic red deer, the area hosts great swathes of primeval oak, yew and ash forest.

These come interspersed with the beautiful Lakes of Killarney, which sit mirror-like under the curiously-hued tops of the Purple Mountains.

The whole place is a veritable mecca for walkers and wildlife lovers, who can weave between peat bogs, moss-caked forests and more, all in the company of swifts, kingfishers and ospreys. 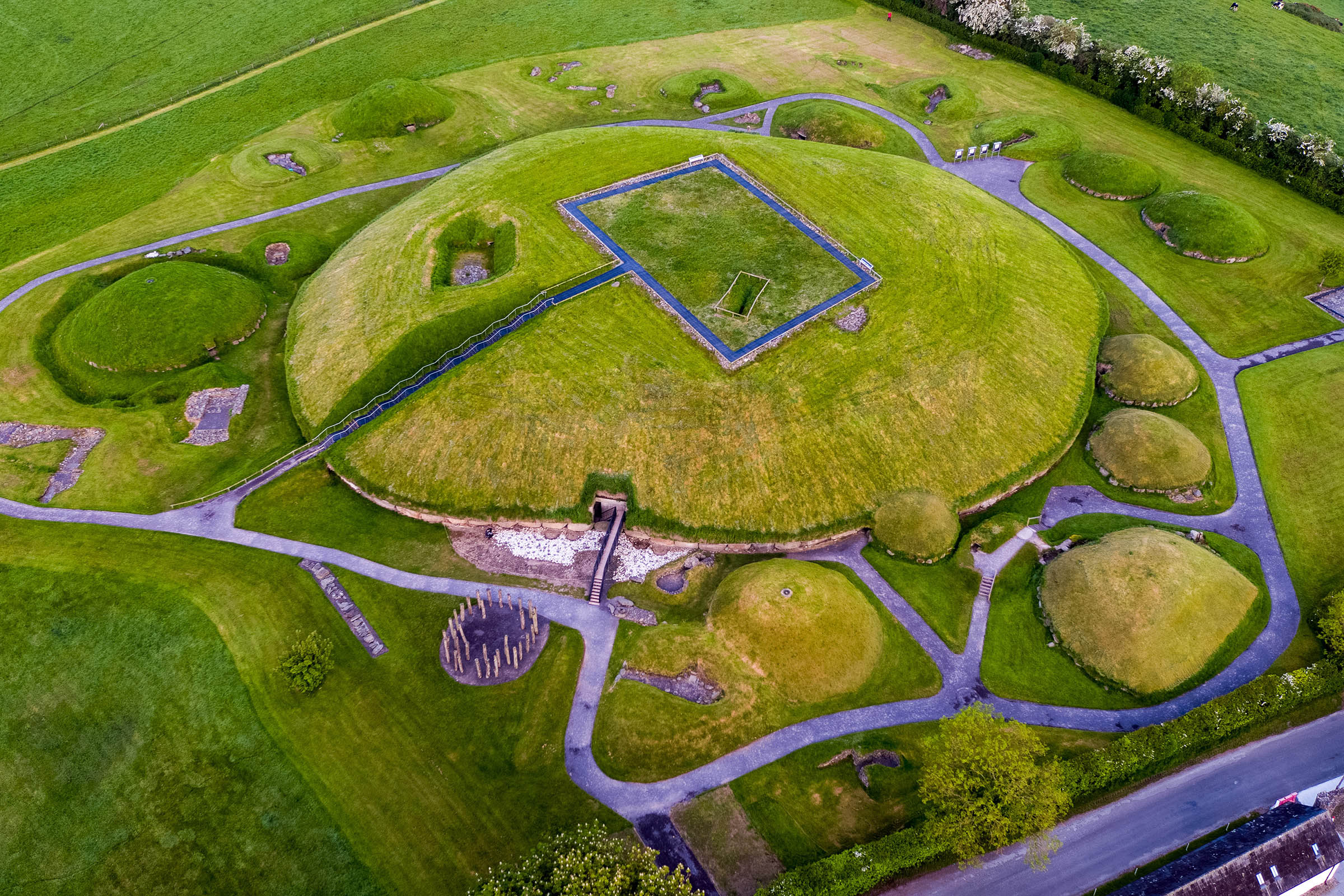 Stretching for around 110 miles from the verdant heartlands of County Kildare to the Irish Sea, the Boyne Valley is Ireland’s answer to the Loire of France or Meuse of Belgium.

Strikingly beautiful and green to the hilt, this land really lives up to the moniker of the Emerald Isle.

Between its borders, travelers can see wonders like the Newgrange monument (which is thought to date back more than five millennia) and the crumbling walls and gatehouses of Trim Castle – once the stronghold of Norman rule in Meath.

Easily accessible from the capital at Dublin, the valley also makes for a fine natural escape from city life, with oodles of marked trails weaving around its riparian banks.

5. The Rock of Cashel Oozing a certain gothic mystery and eerie charm from every one of its Game of Thrones-style turrets and keeps, crumbling walls and crenulated gatehouses, the so-called Rock of Cashel clings like an ancient limpet to the green hills of County Tipperary in the south.

The site was the fortress of the Munster kings way back in the Early Middle Ages, and still hosts builds like the Round Tower and Cormac’s Chapel from that period – many of which stood up to English invaders in later years.

There are also beautifully haunting graveyards of Celtic stones to see, not to mention sweeping views of the beautiful Munster backcountry.

Rowdy, raucous Dublin surely needs no introduction! A town of folksy, Guinness-fuelled pubs and elegant Georgian architecture, this capital city continues to draw travelers from far and wide with its cocktail of culture and heritage, class and hedonism.

Set midway down the beautiful coast of the Irish Sea, the town boasts the colossal St Patrick’s Cathedral (the largest of its kind in Ireland) and the acclaimed Dublin Writers Museum, where travelers can unravel the lives of Joyce, Yeats et al.

The Guinness Storehouse also draws tasters with its brooding ales, while whiskey distilleries are never too far away and Temple Bar Square is famed for its foodie delights, killer restaurants and drinking joints. The capital of its own eponymous peninsula, found jutting out into the Atlantic swells, Dingle sits sandwiched between the beaches and cliffs of County Kerry and the ridges of the revered pilgrimage spot of Mount Brandon.

Steeped in Irish charm, the town is beset by bobbing fishing boats and comes with a distinct, salt-washed seafaring character.

Irish is the language of operation here too, while whiskey from the local distillery seems to be the tipple of choice.

Aside from wallowing in the backwater vibe here, travelers can opt to explore the beautiful panoramas offered by the Conor Pass, go dolphin spotting, and weave between the boutiques and pubs on central Quay Street. Crowned by the colossal Gothicism of St Nicholas’ Church, Galway City once boomed as Ireland’s foremost medieval trading port with connections to the Med.

Sights like Lynch’s Castle belie the rich history of the city’s merchant mayors from this period, while the real character of Galway lies in its boho, quirky side, which bubbles up along the old town’s streets with performers and magicians on the weekend, bursts out of the cafes on the Promenade of Salthill, becomes palpable during the city’s art festival in July, and is never far away between the pubs of Cross Street and the center. Forever drawing day trippers out of the center of Cork, this partly ruined set of keeps and battlements dating from as far back as the 1200s is high on the list of Ireland’s bucket-list sights.

Today, some areas of the site have been reconstructed, while the neo-gothic Blarney House stands tall on the side of the castle, and various nature walks showcase the rugged rock formations that pepper the grounds.

The real piece de resistance though? Well, that has to be the mythic Blarney Stone, which is said to imbue any that kiss it (easier said than done!) with the gift of the Irish gab! Spread over the banks of the River Shannon as it widens to meet the Atlantic on Ireland’s western haunch, the city of Limerick is often overlooked by travellers in favour of the natural draws that have made the region of Munster so famous.

However, those who linger here a while will discover a town that’s firmly on the up, reinvigorated after near bankruptcy and ready to showcase its rowdy Guinness pubs and fervent love for the game of rugby.

What’s more, the place is still wallowing in the prestige of having been Ireland’s National City of Culture, with spots like the Belltable Arts Centre bursting with new productions and plays, the University of Limerick echoing with plain chant and the city gallery of art hosting events like the EVA International festival. It can be found perched out on the coastlines of its eponymous county, cut through by the winding River Lee as it makes its way towards the rollers of the Celtic Sea.

Lively, fun-loving, a tad laid-back and proudly divergent to Dublin, the locals here enjoy flitting between their town’s curious coffee shops and traditional pubs, all of which hide in tight-knit streets spouting off the central vein of St Patrick’s.

The spires of St Fin Barre’s Cathedral overlook the town in glorious Gothicism, while the Cork City Gaol is a prime attraction on the outskirts – if a little gruesome to boot! Nestled between the undulating hills of County Wicklow on the east side of Ireland, the beautiful valley of Glendalough draws visitors with its mix of history and natural wonders.

The ancient abbey in the very heart of the site dates from sometime in the early 6th century, was founded by the revered Saint Kevin of Glendalough, and showcases some of the best-preserved early medieval religious architecture in the country.

All around this crumbling cloister, travelers can delve into a woodland of oak and fern, hazel and mountain ash, where warblers flit between the canopies and the marked trails pierce into the Wicklow Mountains National Park. 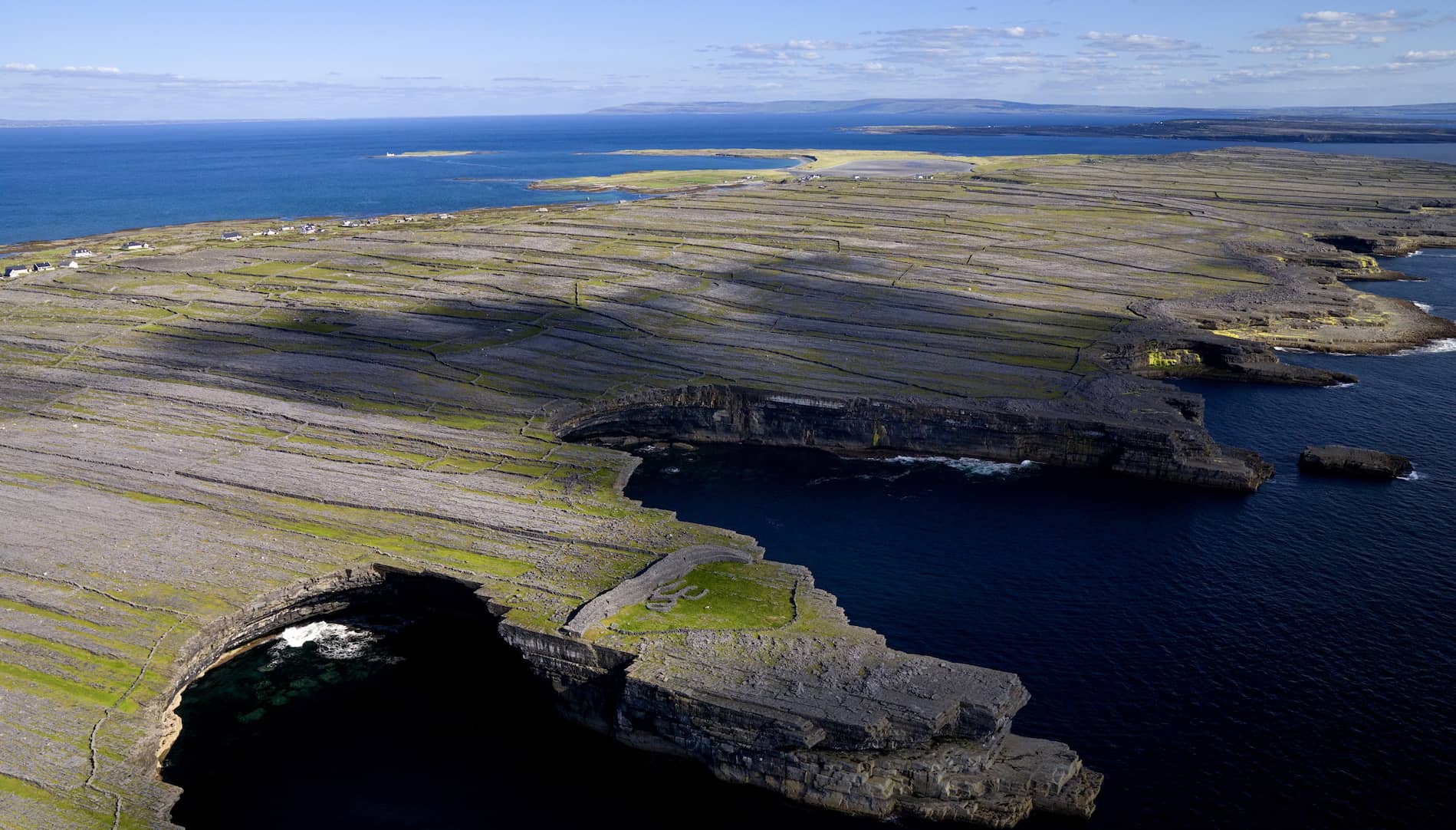 Found lingering out in the Bay of Galway, where the icy rollers of the Atlantic Ocean buffet the seaweed-covered coastal rocks, the Aran Island are a remote and off-the-beaten-track option for anyone interested in seeking out some of Ireland’s more wild and untouched areas.

Spread over three islands – Inishmore, Inisheer and the large Inishmaan – the archipelago offers up beautiful karst plains cut through by creeks and canyons, all peppered with blooms of red clover and Arctic flowers emerging from the grykes (fissures in the rocky ground). However, natural beauties aside, the Arans are also famed for their deep and traditional heritage.

Most of the locals speak Irish day-to-day, the towns come complete with hearty pubs and islander famers’ markets and the clochans (stone houses) and ruins of spots like Dun Aengus belie a past going back all the way to the Bronze Age! Famed as the home of the so-called Ring of Kerry scenic drive, this southern county of the Republic really is one to write home about.

Between its borders, this land in the very heart of Munster hosts the likes of the soaring, 1,000-meter-high Macgillycuddy’s Reeks (home to Ireland’s highest peak, Carrauntoohil) and the church-dotted, cairn-peppered mystery of the Slieve Mish, while out at sea rise the formidable daggers of the Skelligs – Michael with its UNESCO monasteries and Little Skellig with its craggy outcrops.

The various mountain lakes are another highlight – sparkling valley-bottomed waters that come surrounded by grassy farmlands at Muckross and shrouded by peaks in Mangerton and Torc. Sweeping for a whopping 15 square kilometers through County Clare, the Burren National Park (or just The Burren for short) represents surely one of Ireland’s most striking and unforgettable landscapes.

Chiselled and chipped from the karst rocks that form the beds of the hills north of Limerick, the area is awash with crevices and grykes that burst with rare flowers and plants.

Add to that the monolith tombs of ancient Gaelic tribes, and it’s easy to see why hikers, history buffs, botanists and bird watchers alike all flock to The Burren each year!

THE 20 MOST CHARMING TOWNS IN IRELAND 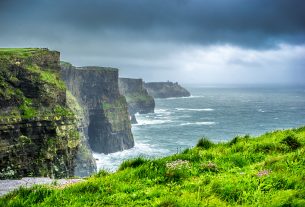 The Story Of The Cliffs Of Moher

7 Things Ireland Is Famous For