Germany is often associated with potatoes and sausages when it comes to food. However, German cuisine is much more than just that. Across the country, each region has dishes incorporating a great variety of ingredients, and Bavarian food is no different.

The state of Bavaria borders the Czech Republic and Austria, and encompasses Munich. It is best known for both its picturesque landscapes and for its hearty cuisine. Here are 11 dishes of Bavarian food that you need to try. 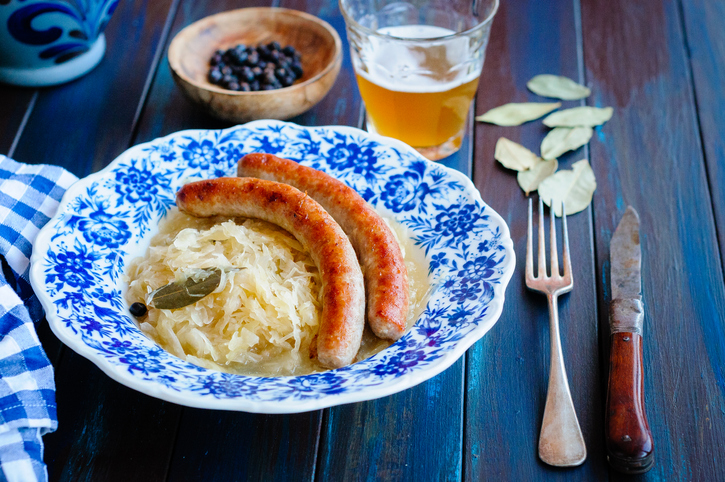 Sauerkraut is an extremely popular side dish made of finely-shredded, fermented cabbages. It is served with everything, from sausages to pork dishes. Tangy and sour, sauerkraut is found all over Germany, but the Bavarian version, blaukraut, is especially flavorful, as it also includes onions, pork fat and grated apple. 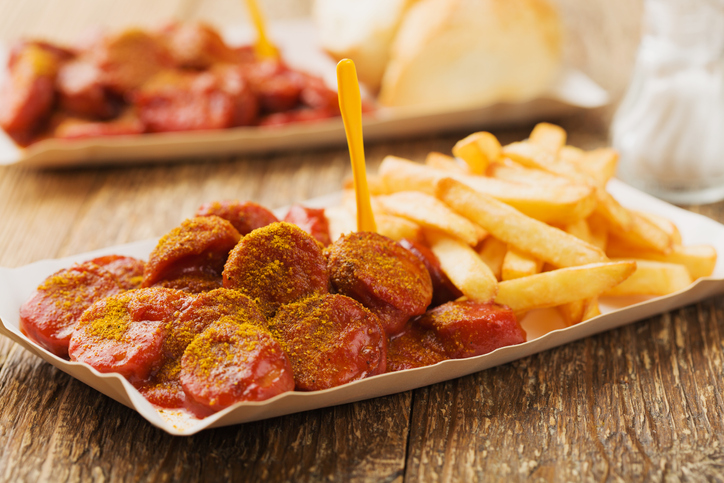 A beloved German snack, currywurst is made with steamed and fried pork sausages, or bratwurst, that is then served with curry ketchup, sprinkled with curry powder and accompanied by fries. 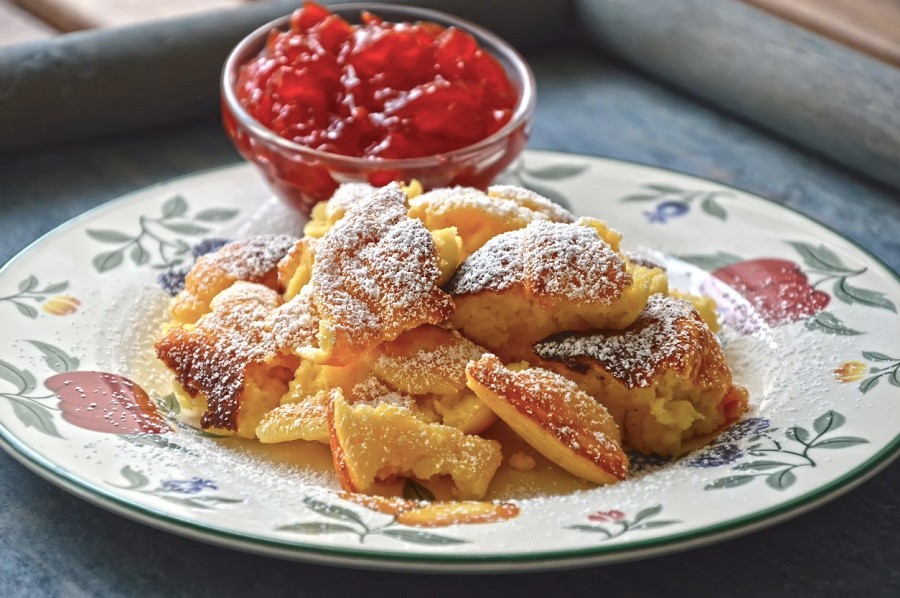 Kaiserschmarrn is a mildly-sweet pancake dish that is scrambled until it is lightly caramelized. As the pancake mix cooks, it is turned and cut with a fork, and then usually served with sugar, berries, jam, or seasonal fruits. 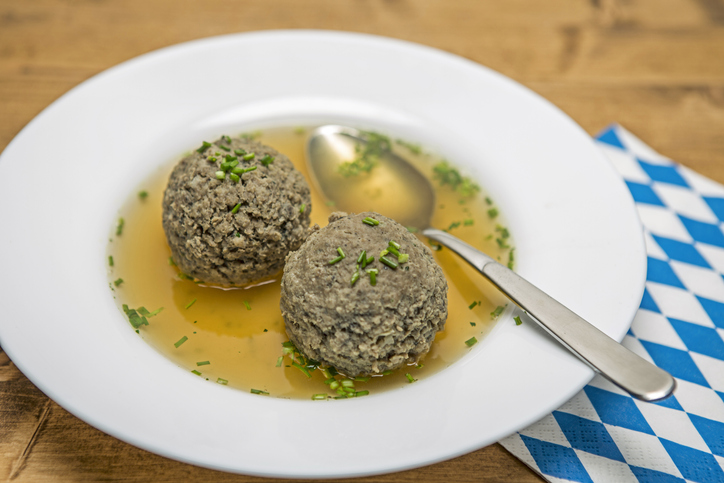 Lots of traditional Bavarian foods are based around liver, and the leberknödelsuppe (liver dumpling soup) is quite popular. The leberknödel, or liver dumplings are a savoury blend of liver, flour, eggs and spices, that are served in a clear broth. 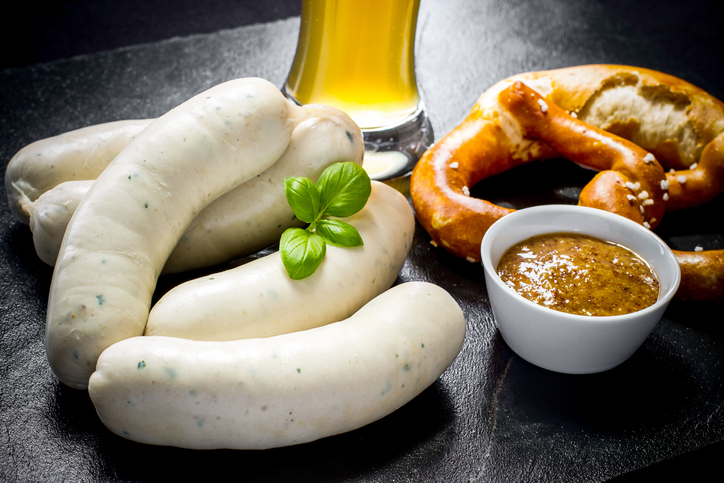 Bavarians love their sausages. The thick and tender Weisswurst (literally, “white sausages”) are usually eaten for breakfast. These distinctive white sausages are made from veal and pork flavoured with parsley and onion. They are usually dipped in sweet mustard and served with pretzels and beer. 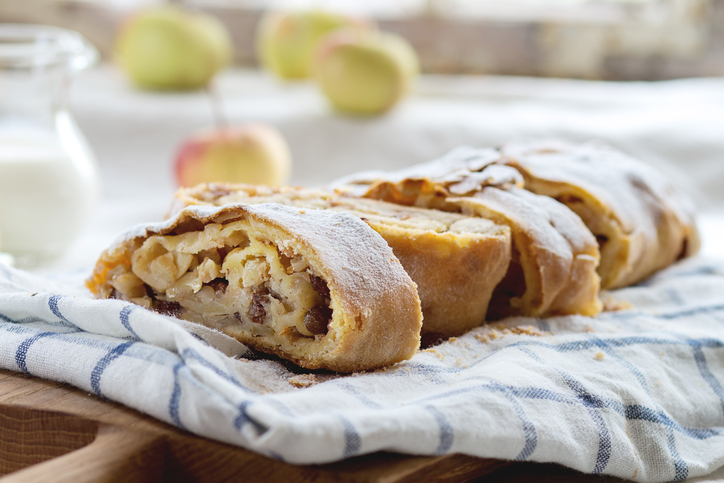 Apfelstrudel, or apple strudel, is another tasty Bavarian treat. This dessert consists of fine sheets of dough (strudel) filled with apple mousse or apple chunks and baked until crisp. It is usually eaten with a dollop of thick cream and a coffee. 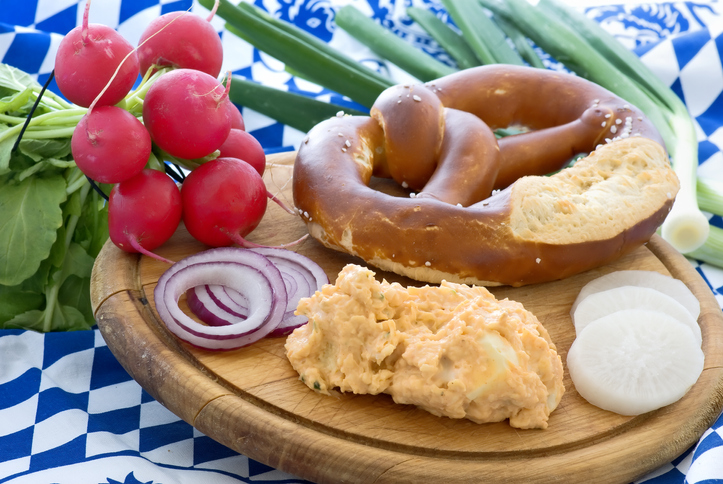 Bavarian pretzels, or bretzels, are known for their slightly hard crust and soft, chewy centre. Ther are lots of varieties to be found, and bretzels are often accompanied by obatzda, a thick, creamy dip made with soft cheese and butter and seasoned with salt, paprika, pepper, garlic, and spices. 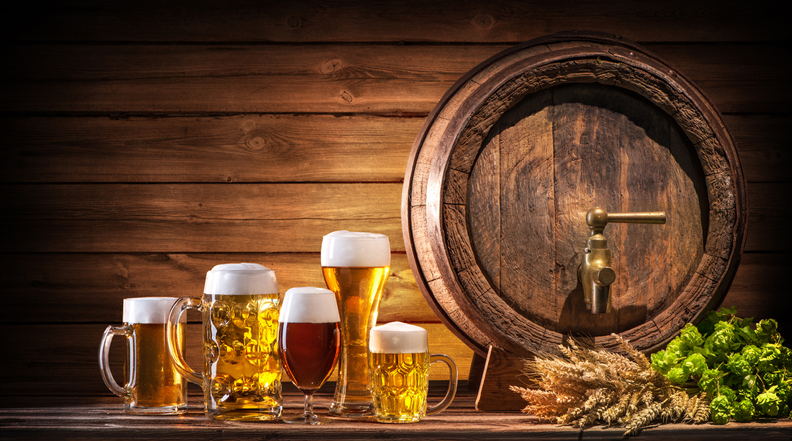 What is a visit to Bavaria without trying some of its famous beer? Like the rest of Germany, beer is brewed according to the Reinheitsgebot, a purity law that only permits water, hops, and malt as ingredients in beer, making it free of additives. Try Helles, a pale Bavarian lager, and Märzen, a malty lager traditionally served at the Munich Oktoberfest. 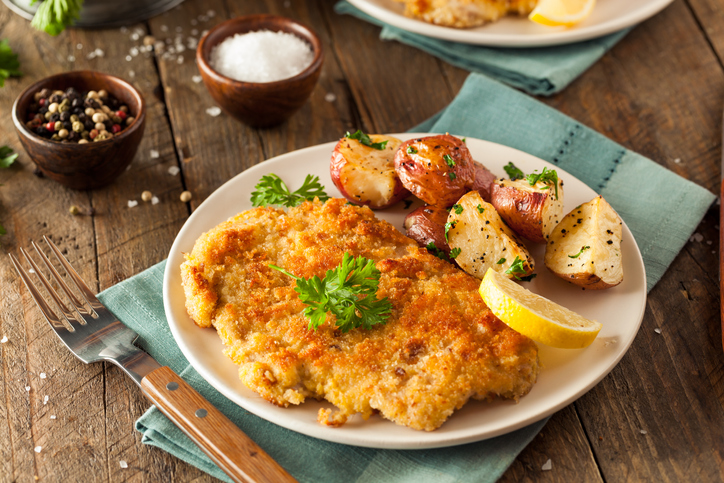 Another popular dish from Bavaria, the schnitzel is usually made from veal or pork. The meat is pounded until flat and then lightly breaded and fried. This is them served with mushrooms and potatoes, as well as a variety of sauces. 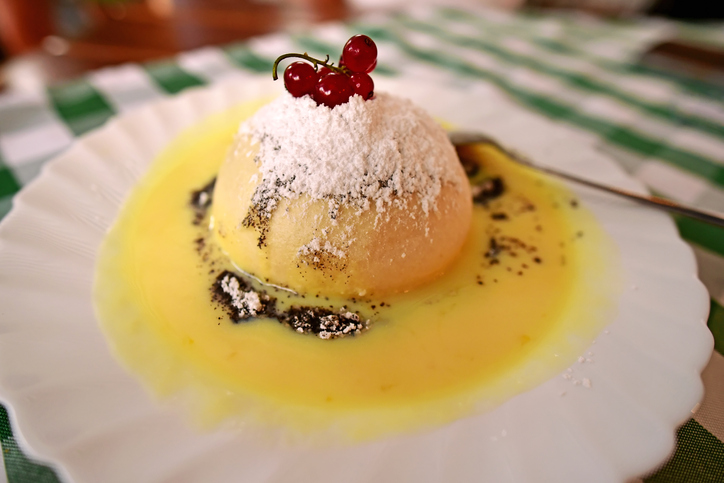 The knödel is a typical Bavarian dumpling. Here, it is filled with powidl, a delicious plum sauce, and served with creamy pudding, vanilla sauce and topped with poppy seeds. 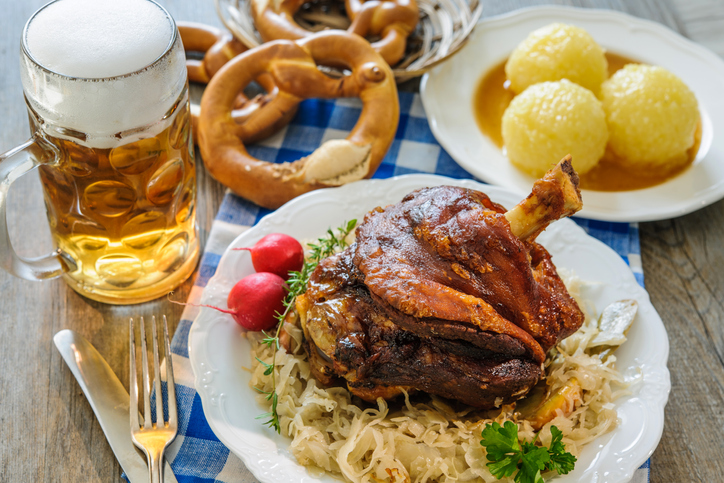 Also called ‘eisbein,’ or ice leg, this dish consists of a slow-roasted pork knuckle served with the skin still on. The meat is marinated for days before being slow-cooked until tender. This is them served with sauerkraut and potato dumplings. 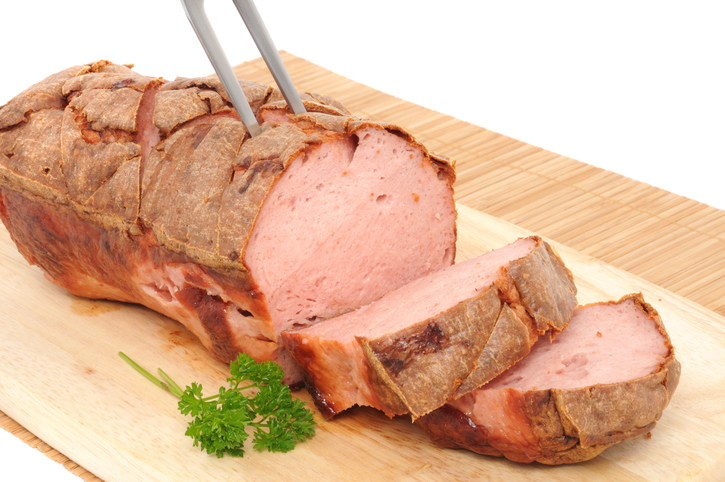 Literally meaning “liver cheese” this meat dish is made with corned beef, pork, and bacon. They are finely ground into a loaf and baked until it forms a crispy brown crust. Slices are served with bread, gherkins and mustard. It can also be fried and served with eggs and potatoes. 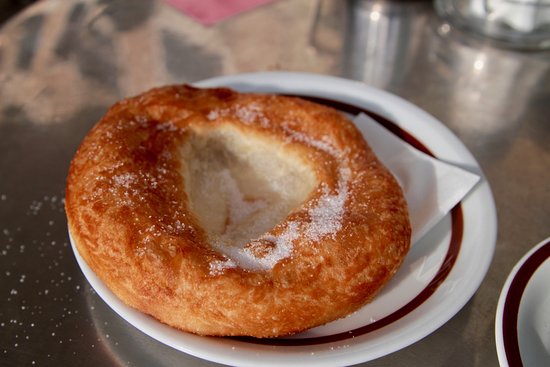 Munich’s answer to the doughnut, the Schmalznudel is a sweet buttered flat ring of fresh, deep-fried dough that rests around another thin film of dough. It is then doused generously with sugar. You can find this sweet treat at Café Frischhut. 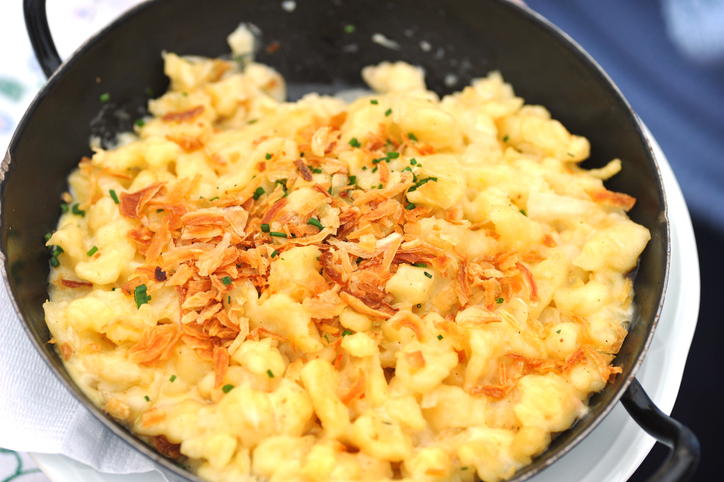 Käsespätzle is made with layers of spätzle (a kind of noodle made with a batter of eggs and flour dropped in small drops into boiling water), and grated cheese. It can also have additions such as fried onions. 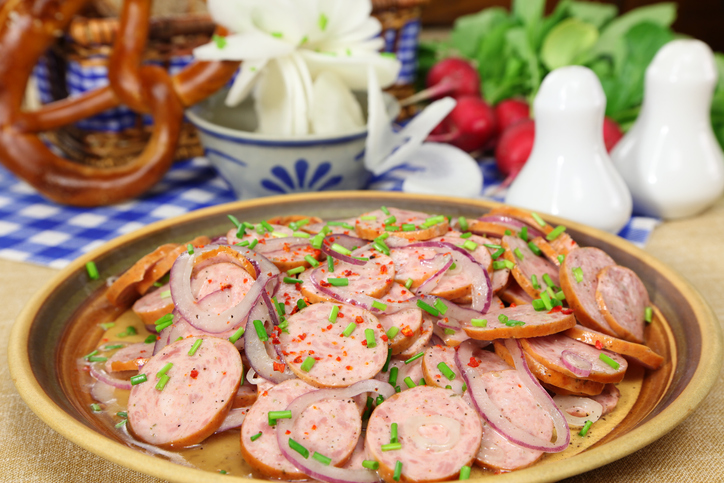 Sausages are found everywhere across Bavaria and Germany even in salads. Wurstsalat (literally “sausage salad”) is made with two to three types of thinly sliced cooked sausages mixed with onions, gherkins, radishes, and parsley. This is then topped with vinegar and paprika.

Is there any other Bavarian food we’ve missed? If so be sure to share in the comments below.

Top 10 Things You Must See & Do in Boppard, Germany