The most recent eruption wasn’t the first since it has been open to tourism, and it surely won’t be the last, either.

Natural disasters aren’t something that happen often but when they do, it’s usually catastrophic for those who are close to their epicenters. The most recent one to make news headlines is the eruption of White Island, otherwise known as the most active volcano in New Zealand. While this island was dubbed a natural preserve in 1953, that doesn’t mean that it was necessarily safe to visit. The most recent eruption wasn’t the first since it has been open to tourism, and it surely won’t be the last, either.

With so much to know and not much that’s already known to the average person when it comes to volcanos, we wanted to provide some insight into what exactly happened. Additionally, we want to discuss what’s happening now. Volcanic eruptions aren’t just limited to the minutes they actively spew magma and lava; the dangers exceed far past that short timeline. They continue to be a danger for some time afterward, and we have all the facts needed in the tragedy following the unexpected White Island eruption.

20. A Total Of 1,929 Square Feet Of Skin Has Been Ordered For Treatment 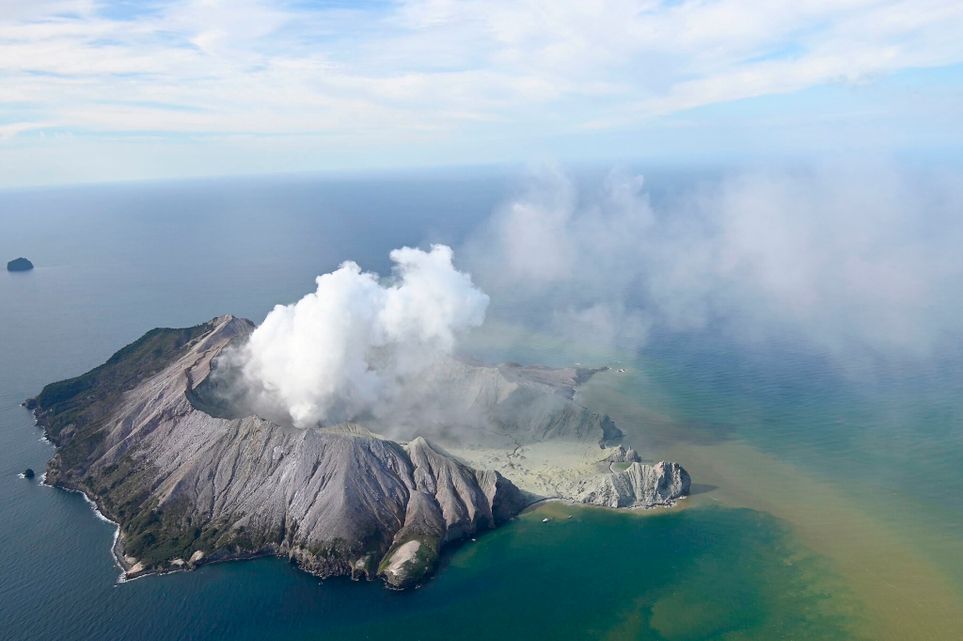 It’s been reported by authorities that 1,929 square feet of skin has been ordered for more than 20 people who were at the site of the eruption. That may seem like a tremendous number but considering only the thinnest top layer of skin is used for graphs, it does add up very quickly.

19. There Were No Warning Signs Prior To The Eruption 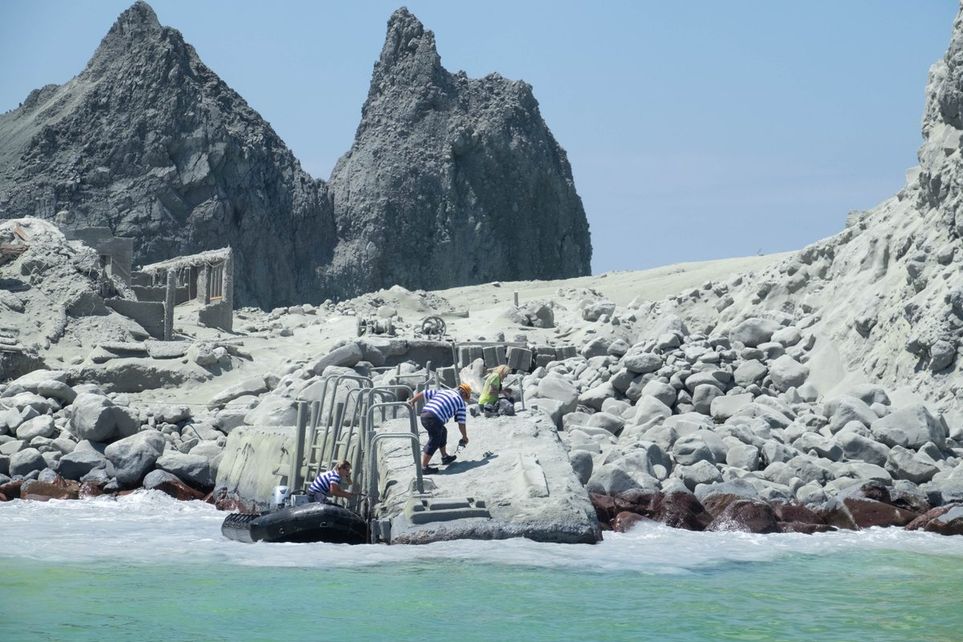 Unfortunately, the volcano gave no drastic signs that the danger on that day was any higher than it normally was. In the weeks prior, the monitoring service for White Island, GeoNet, raised the danger alert from a level zero to a level two, implying only moderate ‘volcanic unrest’. 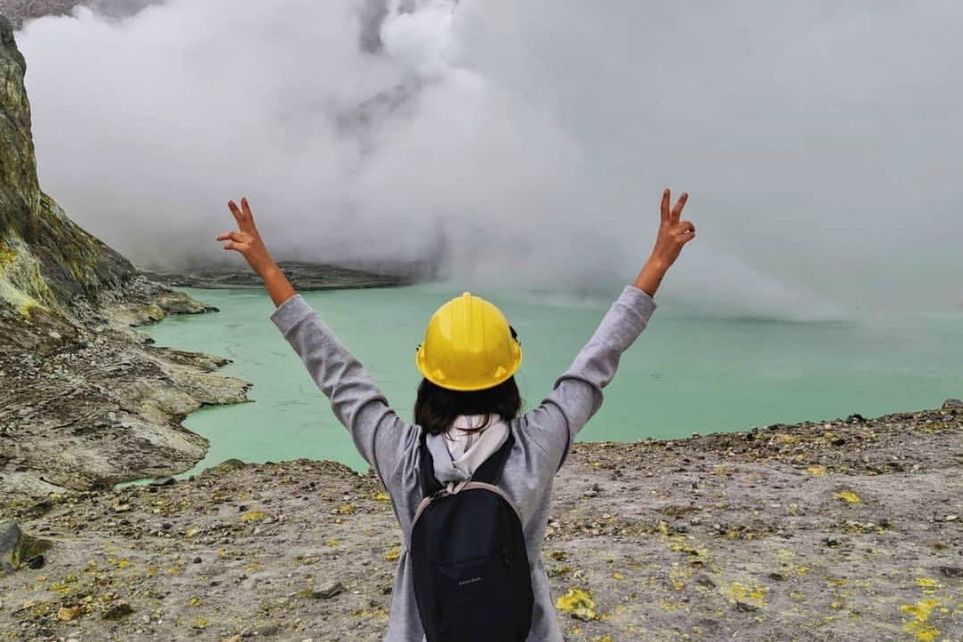 As such, it’s also one of the most dangerous to visit. Those in academia as well as those responsible for the research of the volcano have varying opinions on what is actually saved. The universal belief is that each and every visitor should always be warned of the potential dangers before starting the trek.

17. It’s Too Early To Declare The Investigation ‘Criminal’ 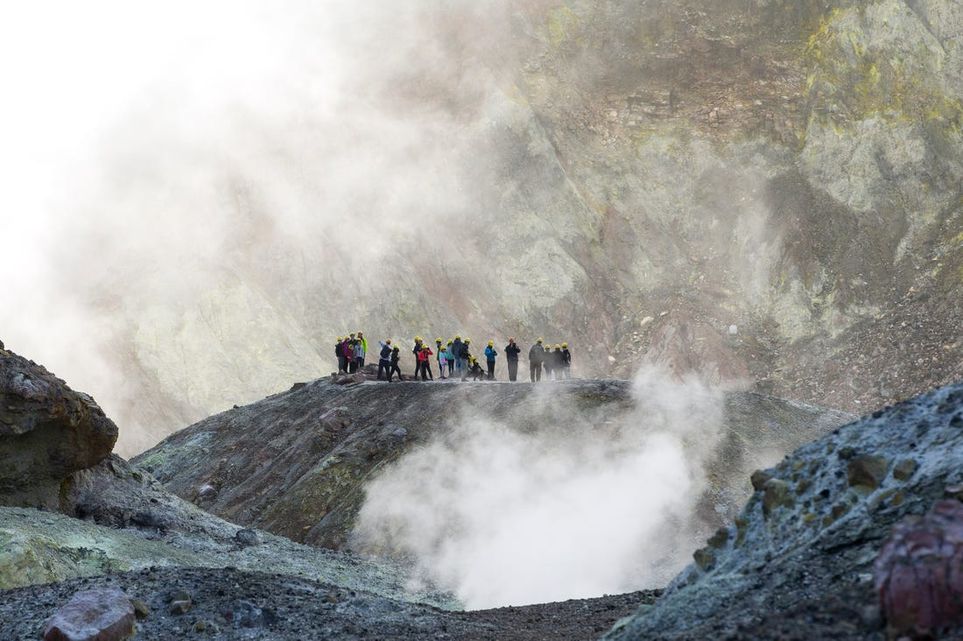 A police investigation was launched in the day following the volcano’s eruption, but it was merely an investigation into the events that occurred and the tragedy that followed. They stated that it was simply too early to decide whether or not there was any criminal aspect to the eruption, a natural occurrence. 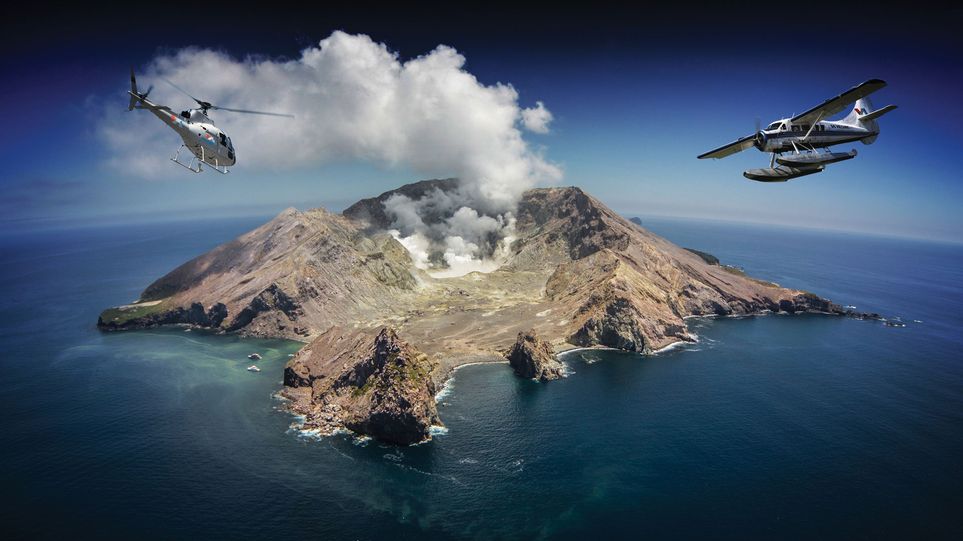 While this eruption might seem downright terrifying, for those who are familiar with New Zealand and its location, the area is quite well known for this. It sits between two tectonic plates which, when moving, are capable of chaos and destruction. The volcanos on the island follow this fault line, thus the ‘Ring of Fire’.

15. Skin Is Coming From US Donors 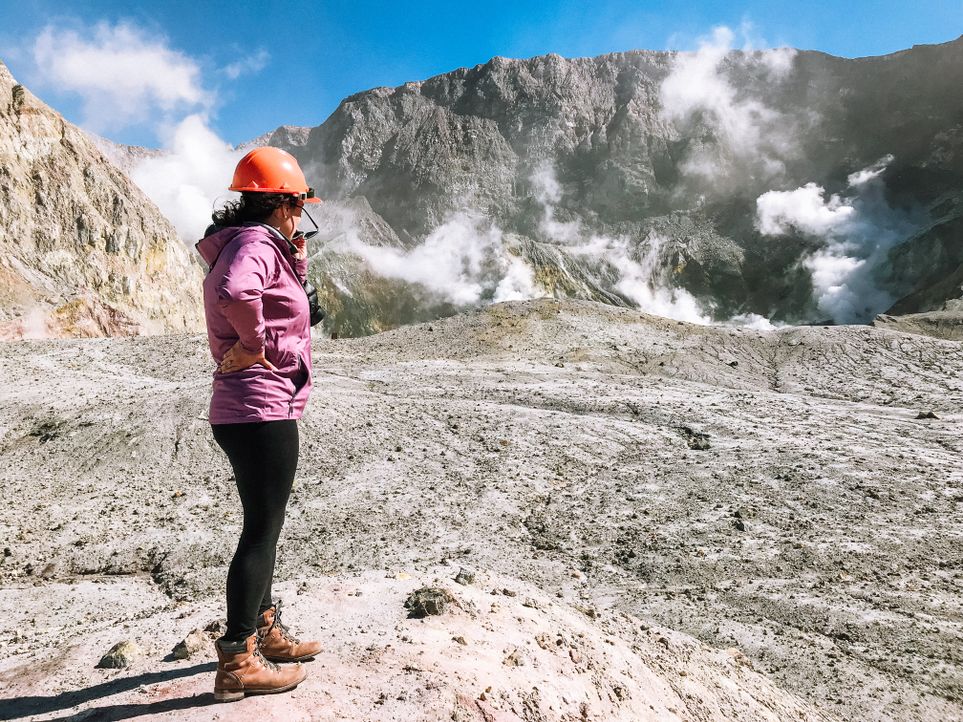 Along with the Donor Tissue Bank of Victoria in Australia, who is providing skin graphs as well as supplies, the US is also participating. An order has been placed by authorities requesting a large amount of skin for graphs, lending international aid in a dire time of need.

14. Rescue Crews Are Heading In Immediately After, Despite The Apparent Danger 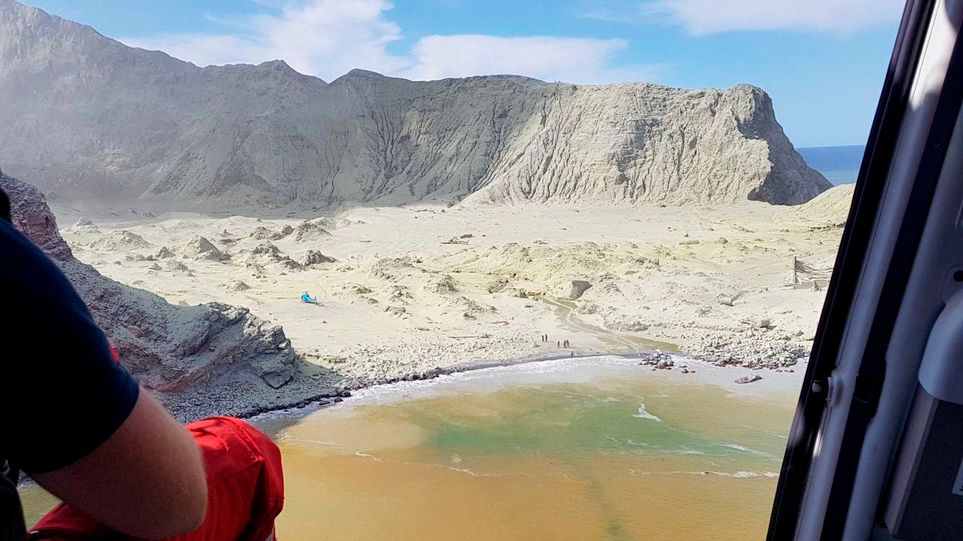 Since New Zealand is ahead of us as far as time zones, the mission has already been carried out. However, despite words of caution that it’s too soon to head into ground zero, rescue teams are prepped and ready to do whatever they can in order to recover the bodies of those who remain. 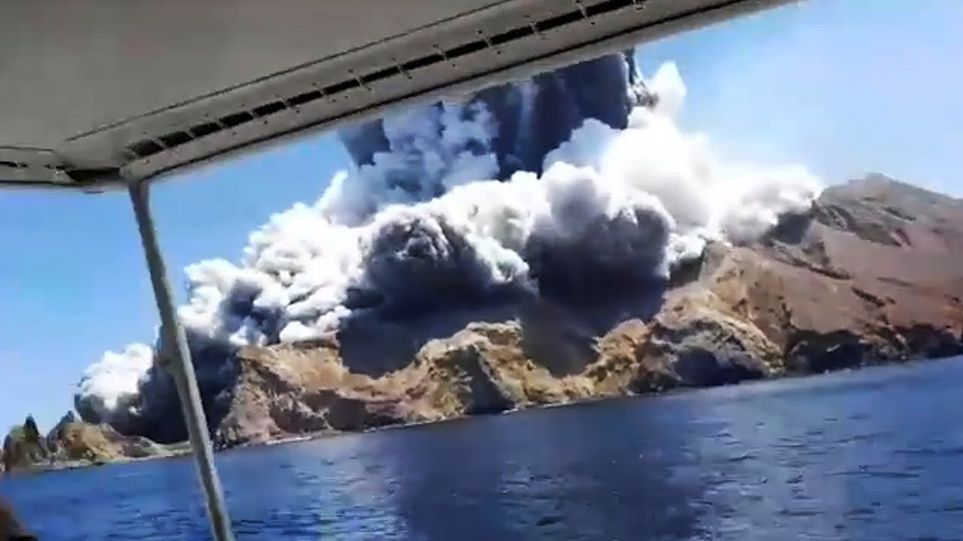 This will still remain a harrowing tragedy in New Zealand’s history, but more than half of the people visiting the active volcano actually survived its eruption. While some remain in critical condition, New Zealand is doing what it can to make them comfortable and aid in their healing.

12. White Island, In Particular, Has A High Chance Of Erupting Again 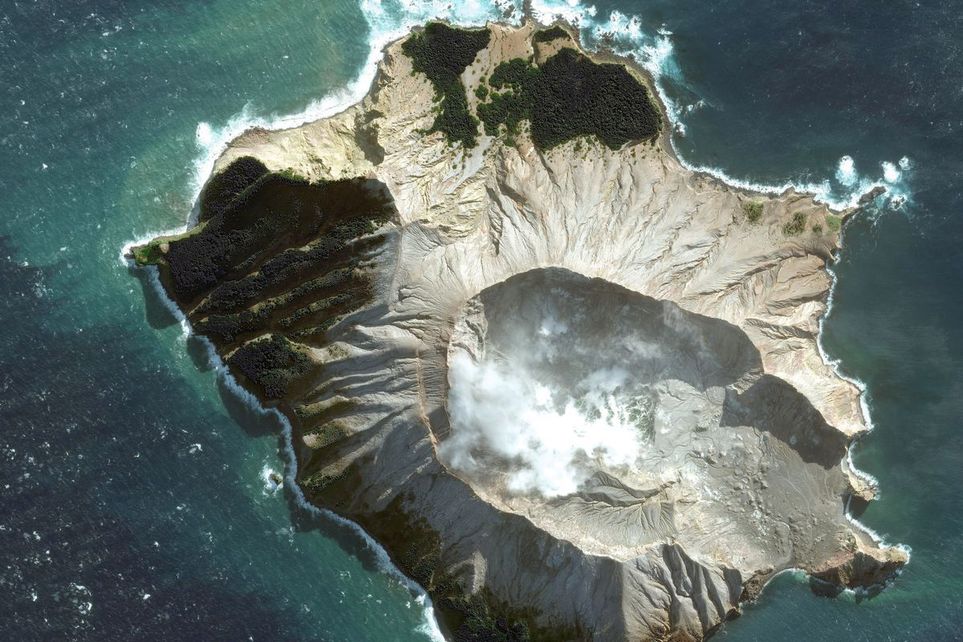 Just like earthquakes send out aftershocks, it’s common for volcanos to erupt again within 24 hours. This is the reality of the danger that rescue crews face when heading into an active volcano, and the risk they take when saving those caught in its path. 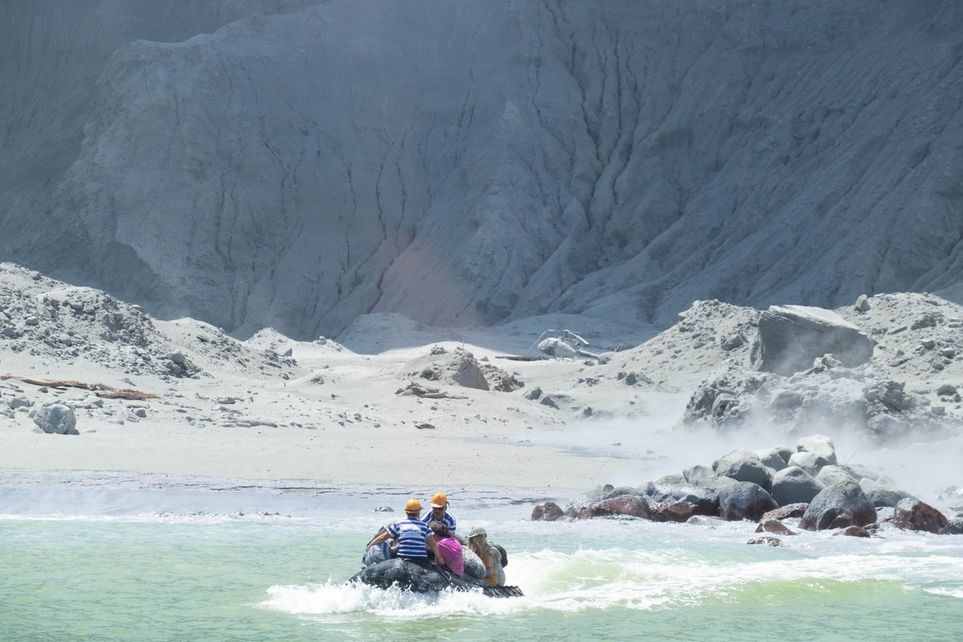 Since its opening in the late 1800s, White Island now sees over 10,000 visitors in a one-year span. Experts say that this tourism is a huge part of what bolsters the economic climate for the area, despite the dangers that do come with hiking through an active volcano such as White Island.

10. Much Like Tornados, Volcanos Also Have A Risk Scale 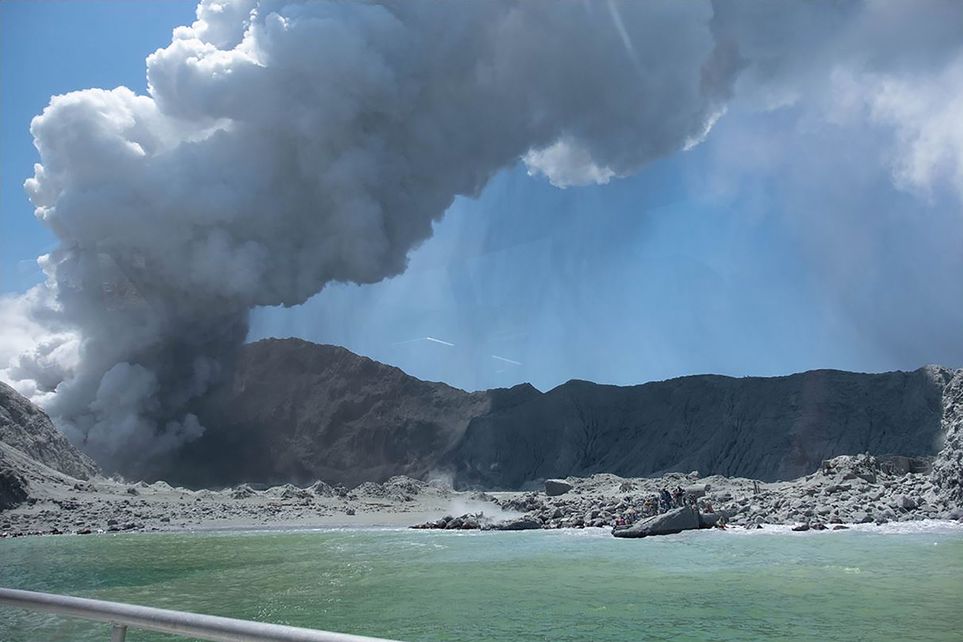 Fun fact: Volcanos are measured on a scale just like the Fujita scale for tornados. For volcanos, it’s a bit more complex: There are six levels from 0 to 5, ranging from ‘no volcanic unrest’ all the way up to ‘major volcanic eruption. On the day of White Island’s eruption, the level was a two. 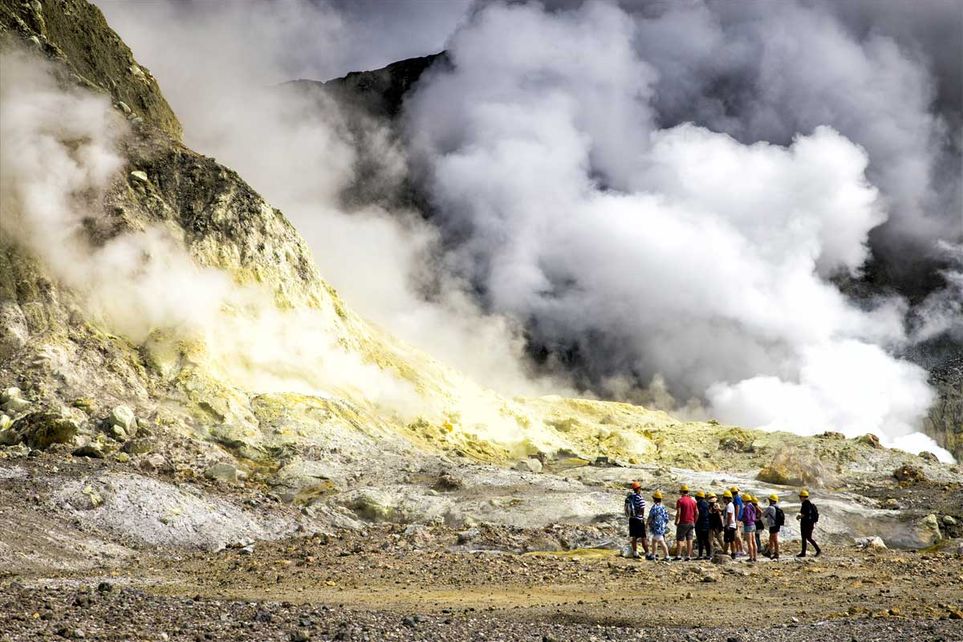 This is why tours are led by White Island Tours, and since the island is private, they must be booked and approved in advance. That day, Paul Quinn, chairman of White Island Tours, stated, ‘There was nothing that signaled there was going to be an eruption’. 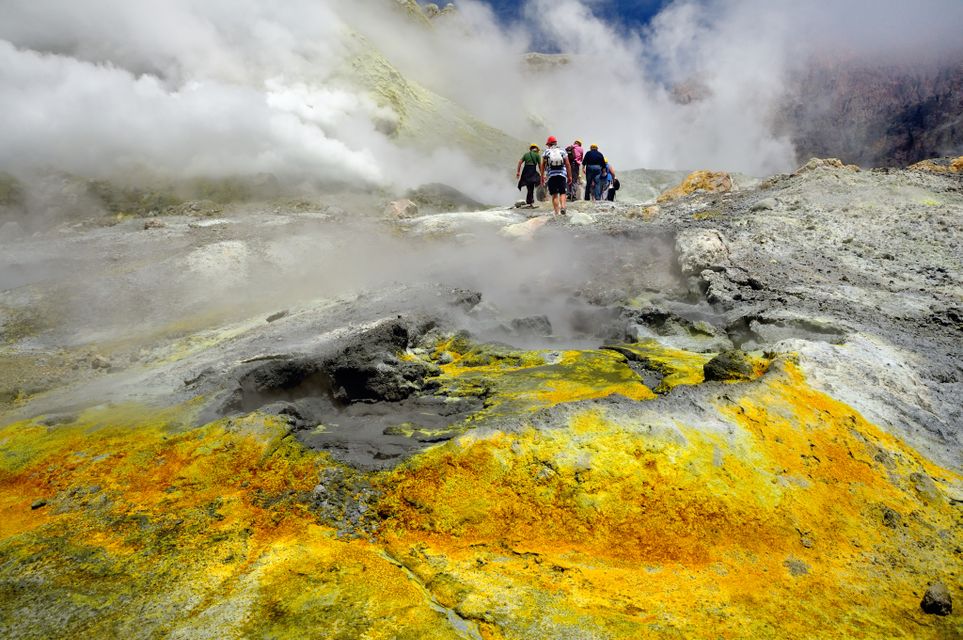 Auckland, the largest city in New Zealand, is home to almost 50 volcanos. While some lay dormant, it doesn’t mean that the danger of their movements doesn’t exist. Each year, New Zealand sees plenty of plate shifts, resulting in earthquakes that citizens of the country have grown quite accustomed to.

7. There Have Been Only Five Major Disasters Since 1886 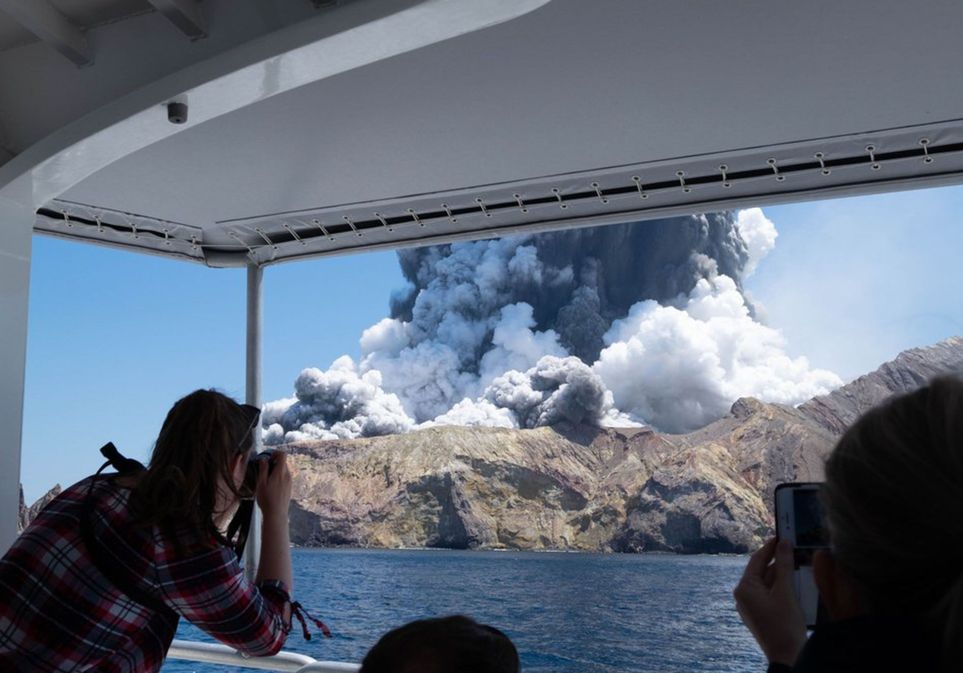 6. Earthquakes And Volcanic Activity Are Part Of Daily Life In New Zealand 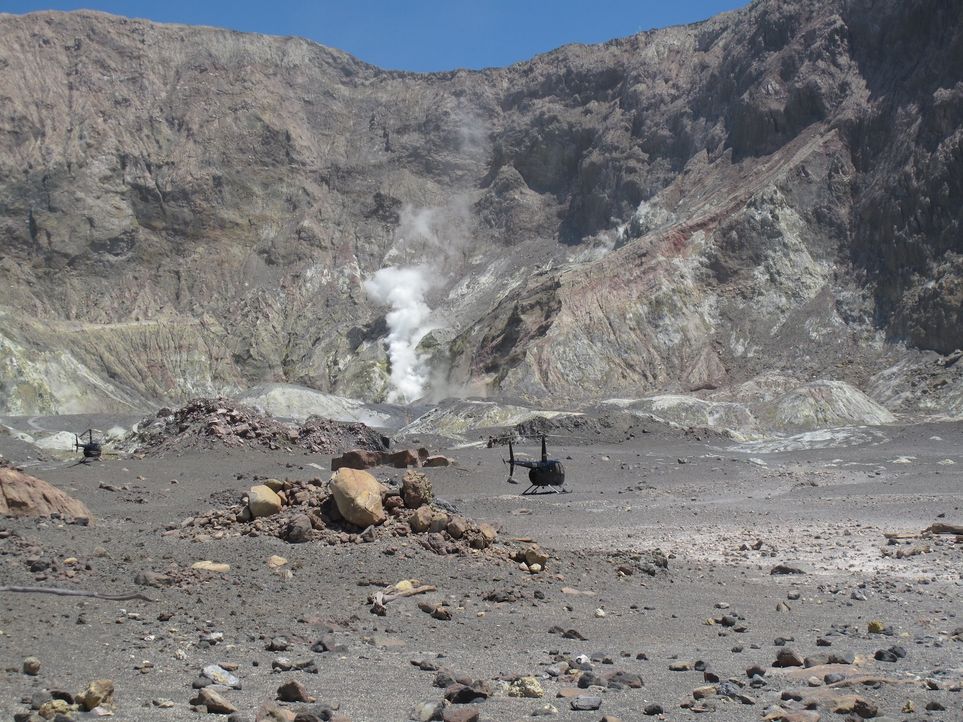 As we briefly stated before, earthquakes and volcanic danger are no strangers to those who call New Zealand their permanent home. Tremors are something they deal with throughout the year and the country is a hub for tectonic plate movements and potentially dangerous eruptions. 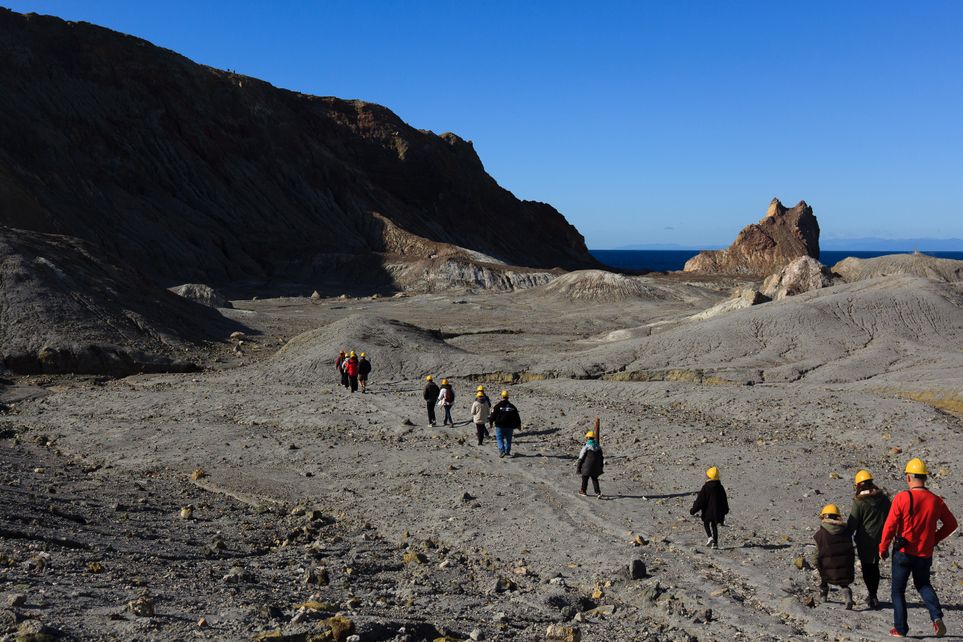 Although the volcano’s activity is monitored constantly, the problem is that there were seemingly no warning signs before White Island erupted. This obviously leads to problems for future tours as well as increasing the danger for future visitors, and most agree that more needs to be done to measure volcanic activity.

4. Volcanos, Including This One, Will Continue Spewing Toxic Gas For Days 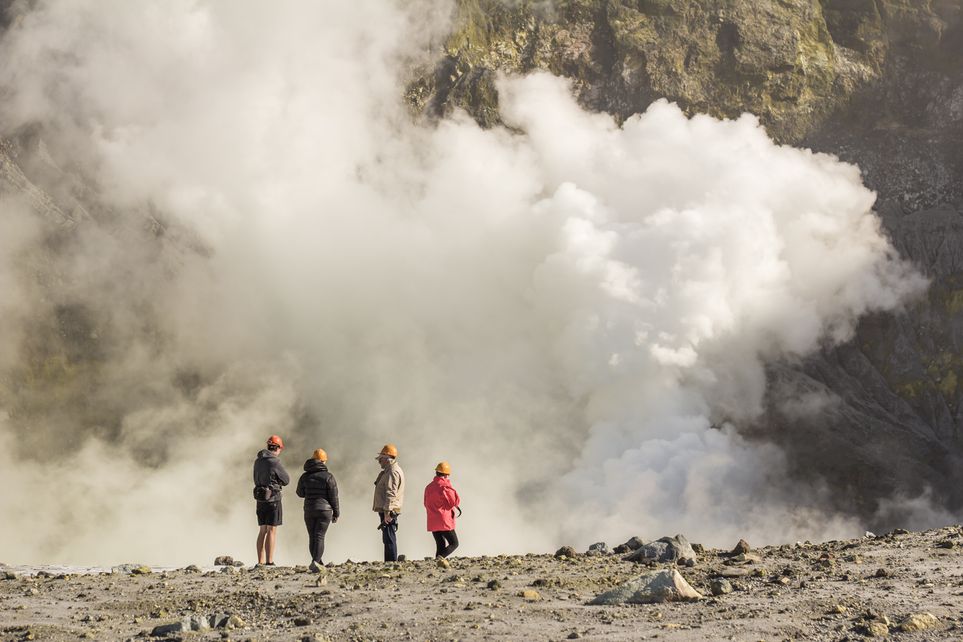 Volcanos present more dangers than just hot, spewing lava during the time of their eruption. Toxic gases also get released from the earth’s core, making it out with ash, hot rocks, and plumes of harmful smoke and searing steam. This is what rescue crews will need to work around in order to carry out their search.

3. There Is A Limited Rescue Window, But Teams Have Full Support With Their Mission 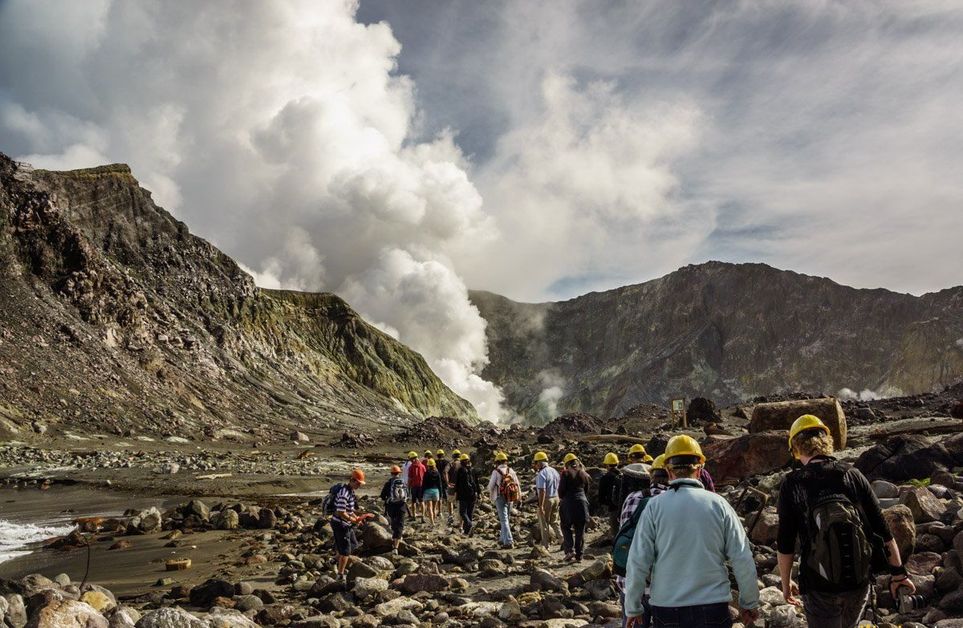 Even though the volcano is being actively measured since its eruption, there’s no telling when or if a follow-up eruption could occur. Due to the island’s remote location, it’s not easy to simply fly in and evacuate a crew in the event that something happens. That’s why teams are prepped ahead of time for the daunting task before them.

2. Believe It Or Not, The Volcano Is A Private Scenic Reserve 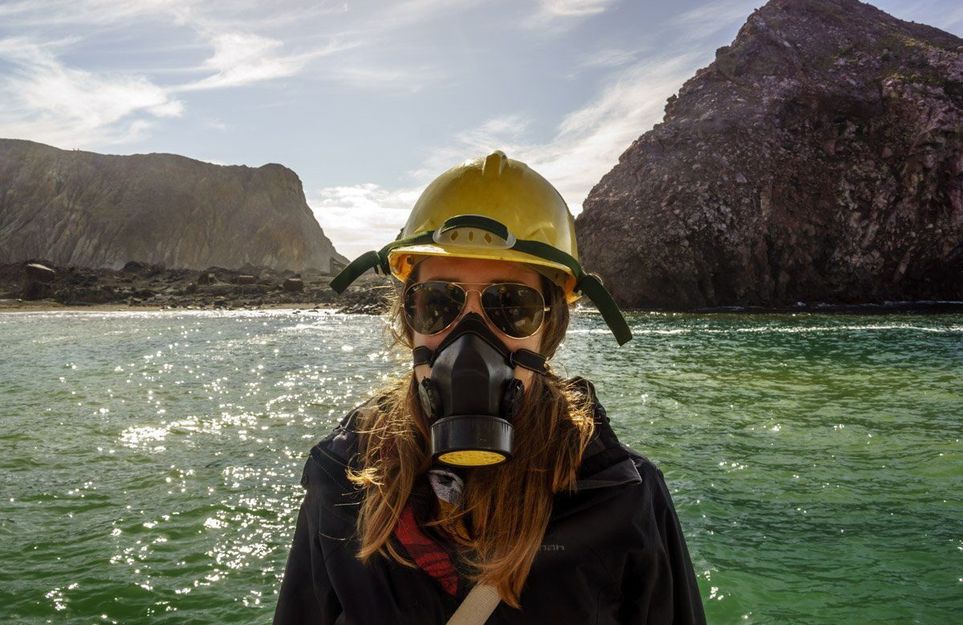 While its latest headline doesn’t seem very travel-friendly, the volcano was designated as a private scenic preserve back in 1953. Constant and consistent monitoring is meant to prevent tragedies such as this latest eruption; however, the earth doesn’t always warn us beforehand. 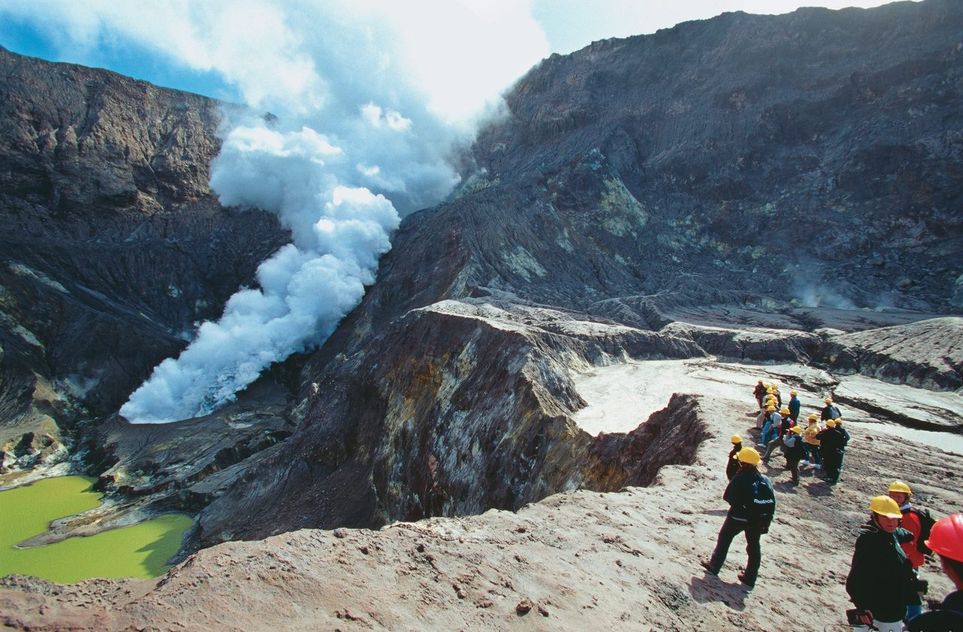 In addition to collecting and testing water and gas samples, a volcano’s activity is measured in several other ways. White Island was being measured with webcams, seismometers, UV spectrometers, and GNSS which accounts for ground deformation. Despite all of that, there were no active warning signs to alert experts of the impending eruption.

New Zealand Is The Most Beautiful Country In The Planet, As Seen By These 23 Photos