Winter is approaching fast and the joys of skiing beckon. Whether you are a seasoned skier or a rather wobbly beginner, Austria is the place to come to. Let me start with a few statistics: Austria has no less than 435 ski resorts and over 2,500 ski lifts. You are bound to find the resort that is just right for your level. From the glaciers of Pitztal and Soelden to the beginner’s paradises of Zell am See and Hochgurgl, you don’t even need to drag your gear with you; skis and boots are for rent everywhere, and buying a chic new outfit or two is just fun.

In addition, you’ll find a vast network of trails called loipen for cross-country and Nordic skiing. In the Kitzbuhel Alps, you’ll find snowboarding, ice skating, and every other kind of winter sport. Ski schools for all ages are available and will take care of your kids while you glide down the steeper slopes.

Needless to say, the resorts take good care of apres-ski too, some more glamorously than others. Whatever you’re after, here are the best places to ski in Austria. 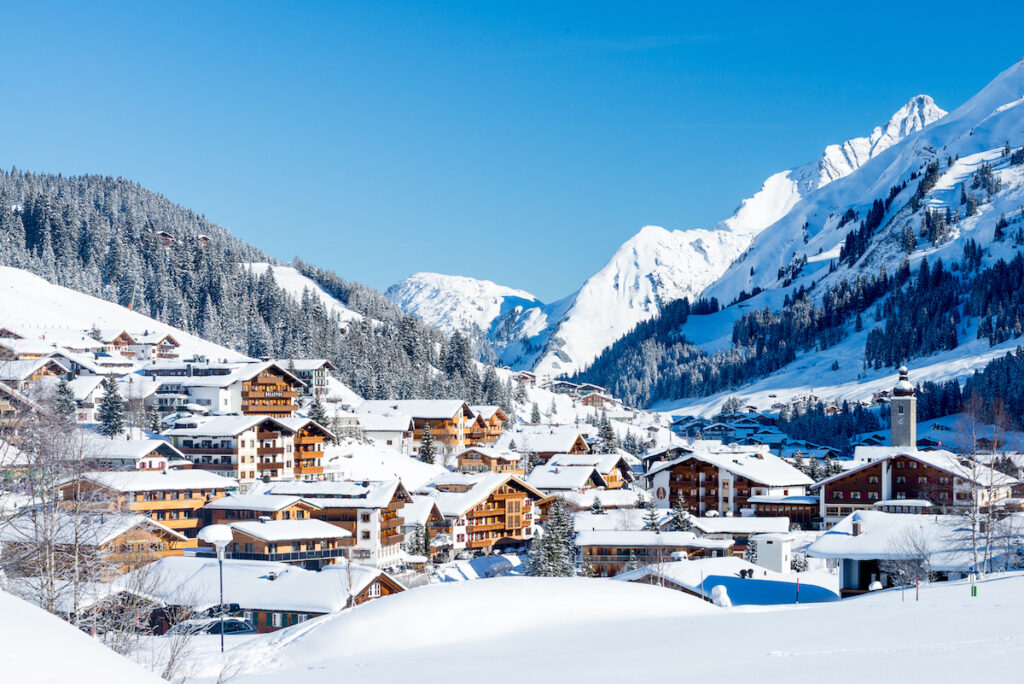 Located in the westernmost part of Austria, in the region of Vorarlberg, Lech is one of the country’s high-end ski resorts. This refers to the quality and great variety of the slopes as well as being one of the most exclusive resorts with prices to match. Lech’s claim to fame is being the favorite ski resort of the Dutch royal family.

Lech has 88 ski lifts, including a gondola, Cable Car Oberlech, and the Seekopf Sesselbahn. Chairlifts have been improved over the later years and are now … heated!

Warth is another nearby resort, connected to Lech by the Auenfeld Jet cable car, which gives you an extra opportunity especially to ski off-piste.

Many slopes are very convenient because they end right at your accommodation. Being as upscale as it is, Lech has several luxury hotels, but there are also chalets for rent to bring the expenses down, especially if you travel with your family or a group of friends.

Apres-ski in Lech is rather sophisticated. A popular place is the Eisbar at Hotel Tannbegerhof directly on the slope. Later in the evening, visit Fux Jazz Lounge, a Eurasian fusion place with dinner and cocktails.

Located in the Tyrolean lowlands of Austria, Kitzbuhel, together with the holiday villages of Reith, Jochberg, and Aurach, has a long tradition as a summer and winter resort.

Kitzbuhel is particularly suited for family winter fun. There are 57 ski lifts including the Steinbergkogel chair lift and approximately 140 miles of beautifully maintained slopes. There are plenty of opportunities for beginners and advanced skiers alike. If you want to learn or improve, ski schools are waiting for you.

Like Lech, Kitzbuhel does have luxury hotels, but a bed and breakfast in one of the typical, cozy Tyrolean wooden houses with large balconies will be cheaper and very comfortable.

Kitzbuhel has plenty of restaurants, too, but it’s much cooler to break your long skiing day in one or the other of 60 huts that are dotted all around the slopes.

The world will be watching Kitzbuhel from January 22 to 24, 2021, to see the world-famous Hahnenkammrennen, a downhill race where the best ski racers compete.

Apres-ski in Kitzbuhel is much more rustic than it is in elegant Lech. Enjoy yourself at Schneebar Oberkaseralm, Mocking Schneebar, or well into the night at Stamperl (currently closed). Rather than cocktails, it’s beer, schnaps, and the excellent wines of Tyrol. 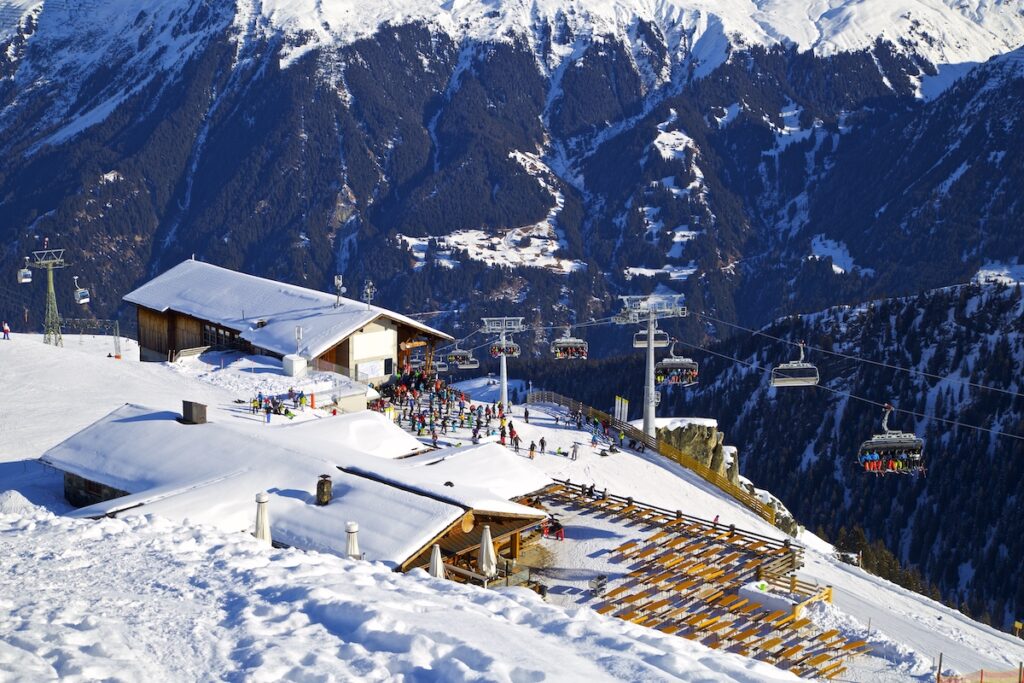 The Silvretta-Montafon ski resort is located partially in Vorarlberg and partially in Tyrol. You’ll find 34 lifts including a Panorama lift and 73 miles of slopes for skiers of all levels. It’s not the highest, but the best-known peak is Piz Buin. Now you know where the name of the suntan lotion comes from!

Ernest Hemingway was a great fan of skiing in Silvretta and wrote several stories about it. He lived for a while in Schruns.

Silvretta-Montafon has the longest valley descent in Vorarlberg and is popular with experienced skiers because of the endless backcountry skiing routes. Experienced ski instructors accompany you so you can enjoy the fresh powder snow whilst you whizz down the mountains. It is one of the most exhilarating ski experiences in Austria. Add to this a snow park, freeriding, shredding, and snowboarding, and you’ll get all the exercise you could wish for.

The region has various villages and resorts, among them the above mentioned Schruns and Garfrescha. Accommodation ranges from luxury hotels to affordable bed and breakfasts. Apres-ski has its place, too, in Silvretta. Check out Ur Monti for apres-ski drinks in the snow or inside. 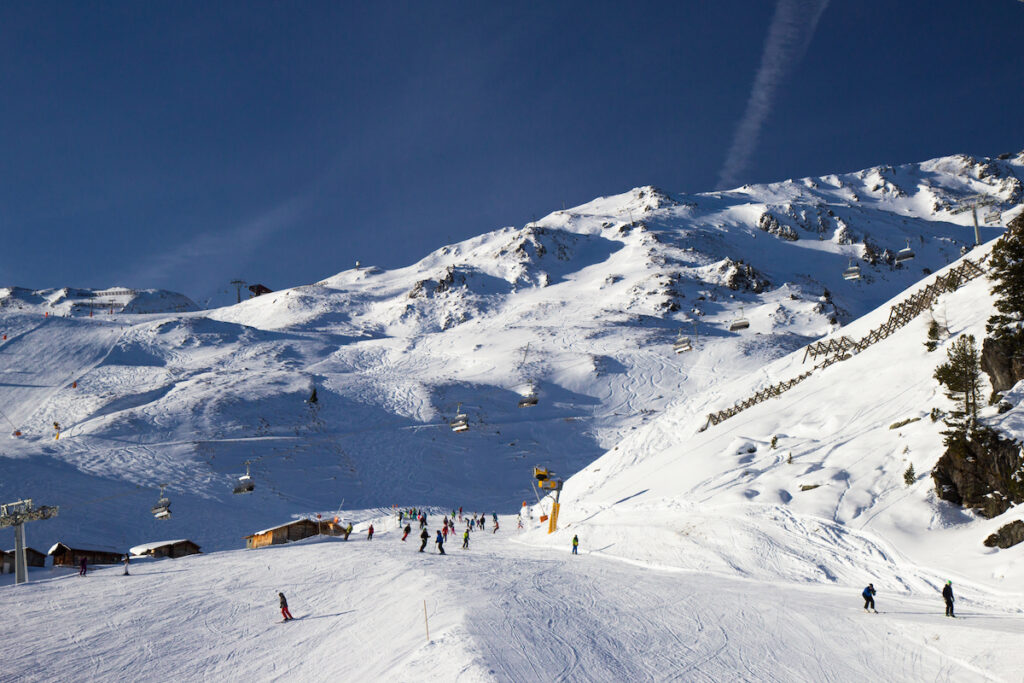 Kaltenbach is located in the romantic Zillertal, which is part of Tyrol. A popular destination in summer and winter, head for skiing either to the Spieljoch, which is ideal for families and beginners, or to Hochfuegen-Hochzillertal. Kaltenbach is a rather small village, but the surrounding ski resorts are easily reached. You’ll find 36 lifts and a total of 53 miles of slopes.

This is a pretty but quite low key and underrated ski area. The advantage here is that you won’t have to stand in line for ages at the lifts, and the prices for accommodation are low.

If you look for things to do away from the slopes, even in winter, go on a trip with the historic Zillertalbahn, a gauge independent railway that runs the length of the valley, or hike to the Kaltenbach Waterfall.

Being small doesn’t mean there is no place to party when it’s time for apres-ski. Try VIP Bar Hochzillertal or a bar called WahnSinn (which translates to Madness). 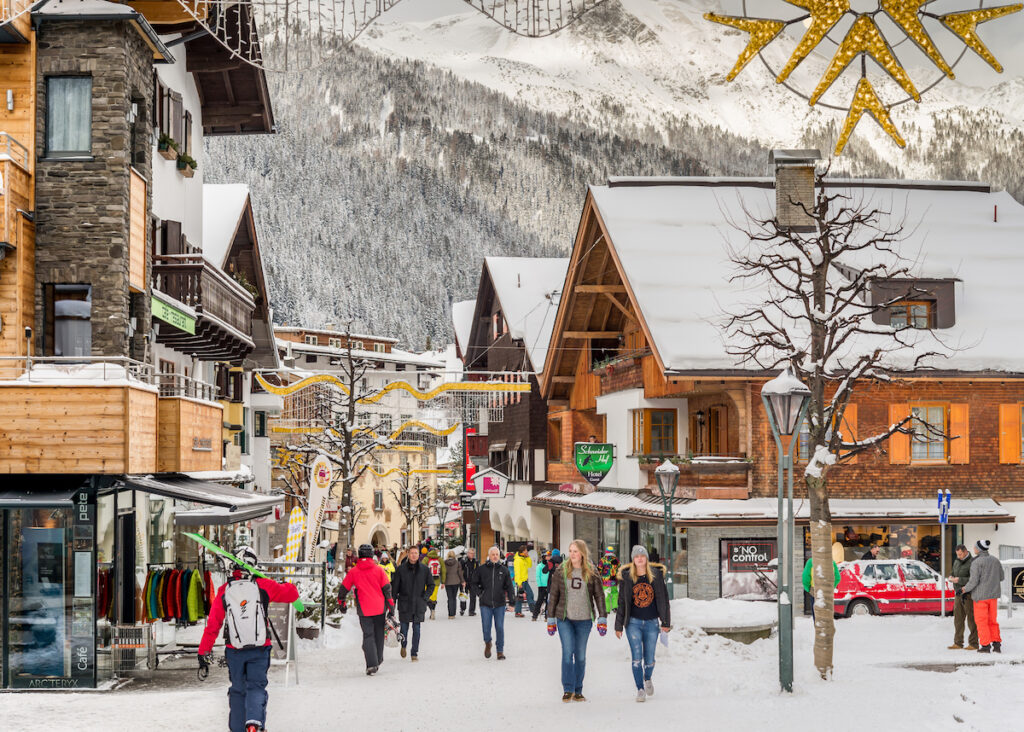 St. Anton in the Arlberg region is known as the cradle of alpine skiing. It’s one of the largest and most popular ski resorts in Austra because of the great variety of slopes and some very great heights. There are places for beginners, but it’s the advanced and even adventurous skiers who get the most out of St. Anton. There is the via ferrata rope climbing trail in the Rendl area where you climb up 8,800 feet with your skis on your back and then whizz down through the powdered snow. Only for the very fit!

With 89 ski lifts distributed over the area, you can enjoy skiing in St. Anton at a much more leisurely pace, too. The new Galzigbahn Lift makes it even easier.

Being such a large and popular resort, there is no shortage of bars and clubs. Try one called The Krazy Kanguruh. 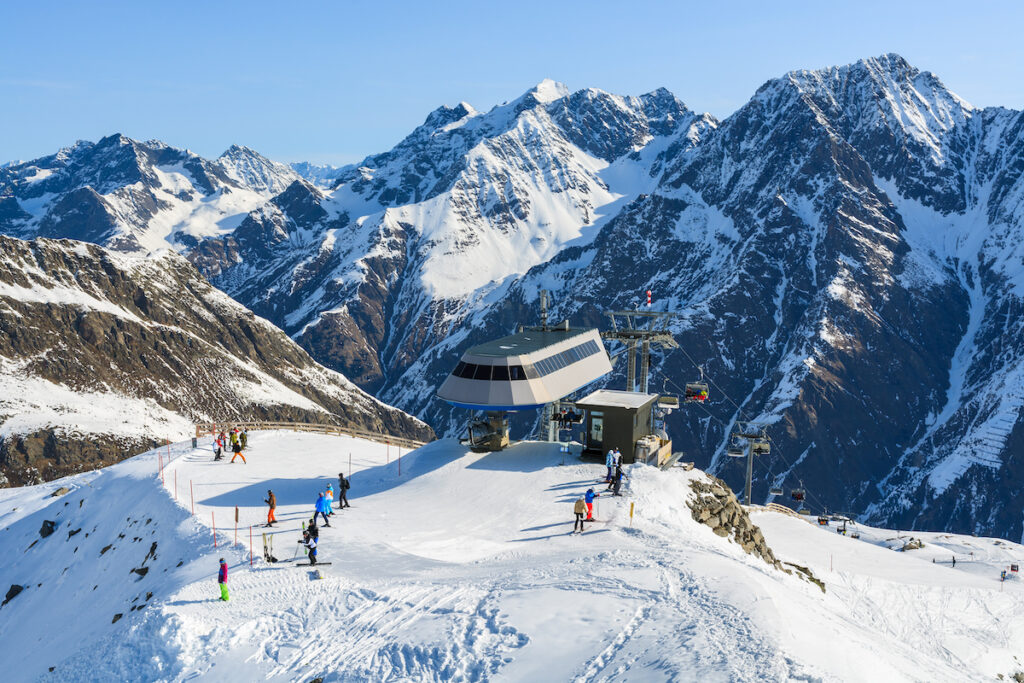 This ski resort in Tyrol is the ultimate thrill for experienced skiers and literally the highest in all of Austria. At a staggering 11,300 feet above sea level, you just about ski without oxygen. Twenty-seven miles of slopes, four lifts, two cable cars, and the Pitztal Glacier Gletscher Express take you up. The season lasts from November to May. Apart from the slopes, which are mostly intermediate level with some black, there is also Rifflsee (Austria’s highest lake) with an area especially for kids and beginners at the bottom of the cable car. On the other hand, daredevil free riders can try a half-pipe and off-piste skiing, always with a guide. If you make it to the top, you can rest and have a drink at the aptly named Cafe 3440.

There are plenty of accommodations with many hotels and bed and breakfasts directly at the end of slopes or lifts, so you can practically ski to your front door.

Apres-ski in the sense of wild parties is not a thing in Pitztal. It’s more about relaxing and having a drink or two in peace after a long day of exhausting exercise. 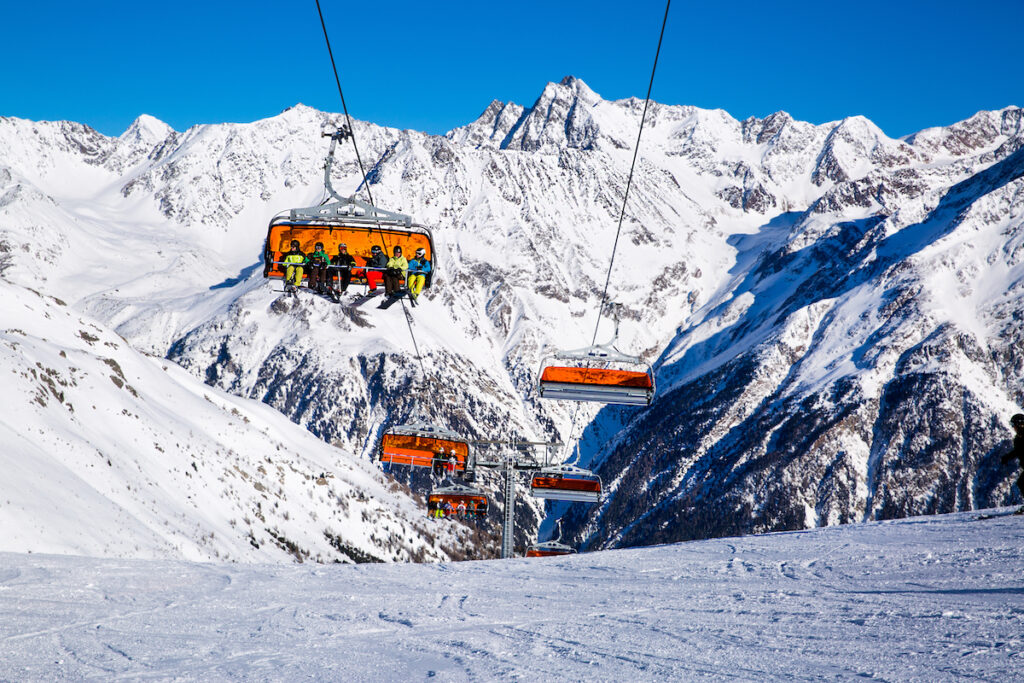 Soelden in Tyrol’s Otztal is ideal for families and skiers of all levels. It’s also a huge and very popular resort, but thanks to interactive maps, it’s manageable. You’ll find 31 lifts, a total of 90 miles of slopes, 33 huts along the way for rests, and three mountains higher than 9,000 feet.

For fun and relaxation, there is the James Bond Cinematic Installation atop Gaislachkogel or the hot springs of Aqua Dome.

Apres-ski in Soelden is lively. One of the top bars is Zum Kuckuck.

Close to Salzburg, the vast ski area of Saalbach is called the coolest in Austria and is known as the skicircus. Enjoy 70 cable cars and lifts, nearly 90 miles of slopes for skiers of all levels, plus a beautiful landscape and the proximity to Salzburg for a day trip if you want to take a day off from skiing. 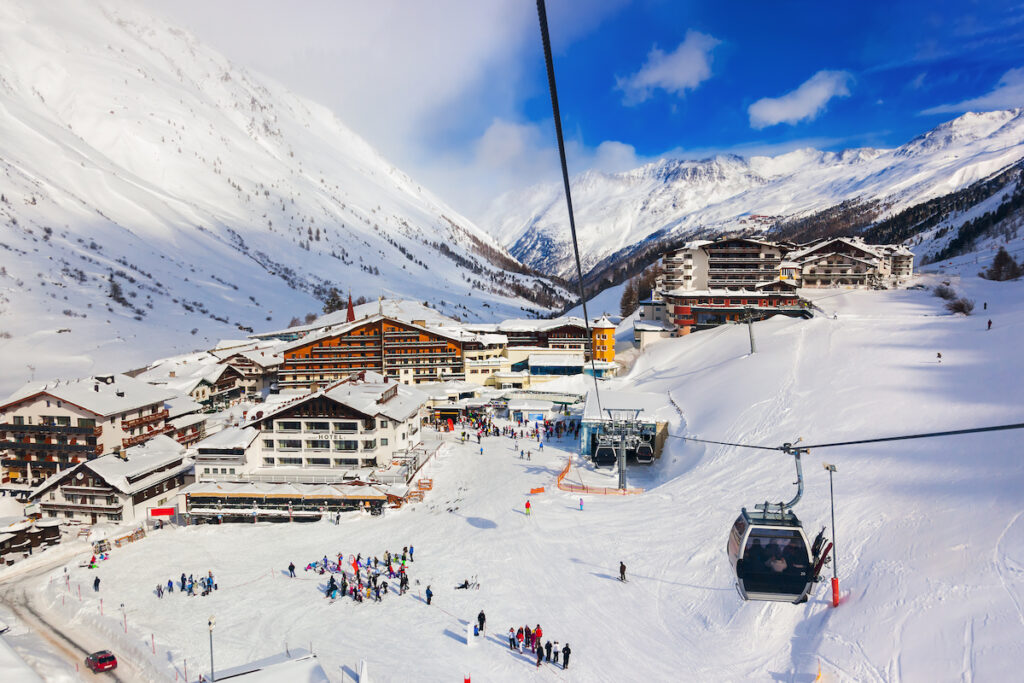 Located at the far end of Otztal in Tyrol, Obergurgl/Hochgurgl is a secluded mountain village that calls itself the Diamond of the Alps because of its international flair and immaculate slopes. A total of 25 lifts and approximately 90 miles of well-maintained slopes cater to beginners and advanced skiers alike. The international aspect of this ski destination is reflected by the number of luxury hotels, but cheaper accommodation is also available.

Apres-ski is plentiful. You can, for instance, end the day with drinks and live music at Zirben Alm, formerly known as David’s Skihutte.

Before you go and whatever your level, take an online ski exercise course. It vastly reduces the risk of injury. Be aware that there is always a danger of avalanches. Pay close attention to the local weather reports and don’t venture off-piste without an experienced ski instructor. Sunbathing at one of the huts is tempting, but use high-protection sunscreen. The winter sun in the Alps is fierce.

Hallstatt Is a Picture-Perfect Austrian Getaway. Here’s How To See It Without the Crowds.