Whenever we think of Switzerland, the first things that come to mind are Swiss cheese, snow-capped mountains and gorgeous mountain lakes. We hit the jackpot with our day trip to Mount Pilatus and Lucerne from Zurich. That journey has it all, every Swiss icon you could imagine.

Switzerland has a very efficient train service, which runs throughout the country. Between the trains and the trams, it’s easy to plan your entire Switzerland itinerary just using public transportation.

The train ride from Zurich to Lucerne is beautiful, and we enjoyed dozens of photo-worthy views along the way.

Looking at the Alps as we rode, we were happy we’d decided to see Mount Pilatus first. Actually, we had a practical reason: Many mountain ranges get cloud cover as the day wears on. Not knowing the Alps, we didn’t want to risk a poor view. Why take a day trip to Mount Pilatus?

Legend has it that Mount Pilatus is the resting place of Pontius Pilate’s body. Another legend says that it was once the home to dragons.

True or not, Pilatus is a beautiful mountain in its own right. Aside from the many activities on it slopes, on a clear day the mountain offers a panoramic view of 73 Alpine peaks. Not surprising, I suppose, considering its impressive height: Mount Pilatus is well over 2,100 meters (7,000 feet) high.

If you love the outdoors, Mount Pilatus is a dream destination. You can take the cable car halfway up to can hike through the verdant mountain forest, do a zip line, traverse a long rope bridge, or let your kids play at the massive children’s playground. You’ll also find a long toboggan run, a rope park and a restaurant there.

You could easily spend an entire day on Mt. Pilatus. How to get from Lucerne to Mount Pilatus

Coming from the city of Lucerne, you an reach the mountain’s summit via two different routes: cogwheel train or gondola. You have a number of other options as well, from guided tours to self-guided excursions.

Speaking of self-guided excursions, we found an excellent one that we’d have loved to do. We just couldn’t fit it into our plans; it required more time than we could manage. (We needed time in the day to see Lucerne too!)

Golden Round Trip from Lucerne to Pilatus

We try to avoid using the word ultimate (it’s so overused!), but this self-guided Golden Round Trip could count as an ultimate experience. This is a full-day excursion from Lucerne that looks to be truly memorable.

We’re talking about a boat trip on a mountain lake, the steepest cogwheel train in the world, a cable car, and a gondola. The whole shebang. Between the views and the transportation, it would definitely be worth the time and cost. There’s also a Silver Round Trip that gets you there by train instead of by boat.

You can book the Golden Round Trip here.

We’d be remiss if we didn’t mention that you can also take an organized day tour from a number of Swiss cities. If your budget allows, this is the easiest option. It is also an advantage to have a native guide and to be able to do everything on your own schedule.

If guided tours interest you, you can find more options

If you’re not fond of heights, you might prefer to take a cogwheel train to the top of Mount Pilatus. To get there, you can either take the boat or the train from Lucerne to the town of Alpnachstad. The cogwheel ticket office is near both.

The gondola to the top of Mount Pilatus leaves from the town of Kriens. To get there, you can take either a bus or a train to Kriens from Lucerne. Conveniently, Lucerne’s bus and train stations are right next to each other.

We thought it might be fun to see the little towns along the way, so we chose to take the bus. It’s only a 15-minute ride. You take bus line 1 to the bus stop called “Kriens, Zentrum Pilatus,” then follow the signs to the gondola ticket office.

There, you’ll buy a ticket for the Mount Pilatus gondola and enjoy the ride to the summit.

The gondola does not go nonstop to the top. Expect a couple of rides and transfers due to the mountain’s topography.

Riding the gondola to the top of Mt. Pilatus

That gondola ride was a surreal experience in itself. We could see local farms and hear a bell tinkle on the occasional Swiss cow as we rose. Iconic, right? Enchanting houses that could have been straight out of Heidi begged to be photographed, but we passed them by too quickly to catch them.

At least Dan grabbed a photo of a belled cow in someone’s yard. Such a memento.

Our cable car stopped on the way up to disgorge all its passengers and return those waiting to the base of the mountain. Everyone changed to a different kind of cable car for the steep, final leg of the journey.

At the summit of Mount Pilatus

When the cable car spit us out, we found ourselves in the Visitor Center between the mountain’s two pinnacles, complete with a restaurant and shops. Not in the market for souvenirs, we headed outside onto the large concrete viewing platform, a historic hotel, and some paths for any visitors who wanted to take a walk.

A number of trails run along the mountain top. With no clue where any of them went, we chose one that looked like it went to the highest point. The rock steps were steep and narrow enough in spots to require turning sideways to pass those on the way down. Thank goodness the path had places to rest, because it was a workout, especially at such a high altitude!

Unused to such strenuous activity, I took my time going up. This allowed a chance to appreciate the many colorful alpine flowers growing in the crevasses along the way. Anyway, why rush? The journey is part of the fun.

Let me tell you: The spectacular 360-degree view at the top makes the tiring climb worthwhile. Do it! In one direction, we could see miles of sparkling blue lakes and verdant farmland. In another, there were snow-capped mountains, including glacier-topped Mt. Titlis. I’m not sure if all of them were even in Switzerland

While we stood there, we watched someone riding the thermals with his parachute. His was an even better view than the one we had. 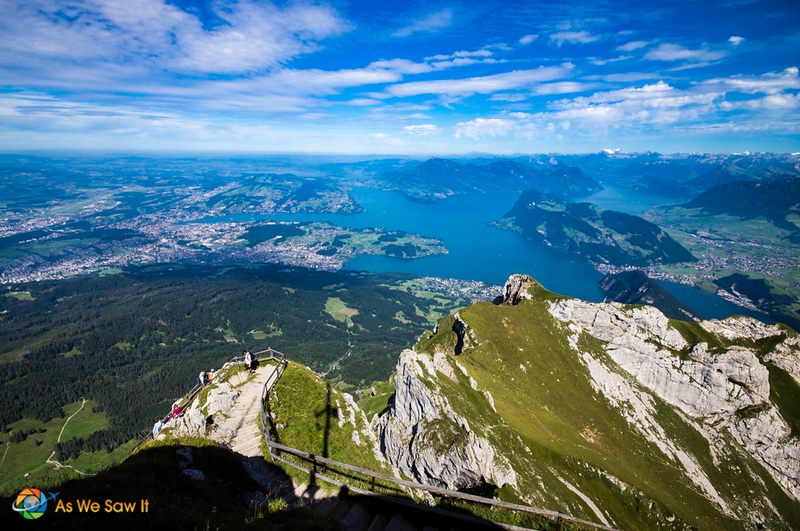 Cogwheel train down from the top of Mt. Pilatus

The gondola had carried us up one side of the mountain to get to the top, and the unique Pilatus Railway took us down the other. This is the world’s steepest cog railway, reaching as much as a 48 percent gradient. That’s really steep!

Commissioned in 1889, the little train travels between the summit and the Swiss town of Alpnachstad. It’s a scenic 30-minute ride, offering views of dense pine forests, rolling alpine meadows, and craggy rock formations. We were almost sorry when it arrived at the base station, but our Lucerne day trip segment was waiting. With about 80,000 people, Lucerne is the economic and cultural center of central Switzerland. There are too many things to see in Lucerne to do it all in one day, or even a week. With only a few hours in Lucerne, we focused on walking around the city center and the lake around it.

Looking back, we probably should have taken a guided tour like this one.

Switzerland is picturesque, but Lucerne’s Old Town is often considered one of the prettiest in Switzerland.

We really didn’t have any plan or itinerary for Lucerne. Nothing wrong with that, really, but even though each place has its own ambiance, it’s hard to share how a city feels.

So here are some photos and impressions from Lucerne. Or as the Swiss spell it, Luzern.

The 200-meter bridge was originally built in 1333, which makes it the oldest covered bridge in Europe. It’s also the world’s oldest surviving truss bridge.

Midway across the bridge, there’s a well-preserved, octagonal stone tower. Also built in the 1300s, over the years it has served as a fortification, a dungeon & a treasury.

You can’t climb it, but you can enter the gift shop on the ground floor.

Built in the late 1600s, the Lucerne Jesuit Church’s claim to fame is that it was Switzerland’s first baroque sacred building. It is one of the most important churches in the city. Hofkirche St. Leodegar (also called the Court Church of St. Leodegar) is Lucerne’s parish cathedral and is the most important Renaissance church in Switzerland. It dates from the 8th century, when it was founded as a Benedictine monastery.

The original Gothic church was destroyed by fire in 1633. Little survives except for the spires, St. Mary’s altar, and a few religious objects. With mountains that drop straight into the water, Lake Lucerne seems more like a fjord than a lake. Fed by the Reuss River, this is Switzerland’s fourth-largest lake, and it has plenty to entertain.

Adventurous visitors can hike the 34-km (21-mile) Swiss Path, or bicycle around the lake. Those who prefer something a little more relaxing can feed the swans, go boating, or take a paddlewheel steamer to other spots around the lake.

Though food is always a highlight, sometimes it’s more about where you eat it. Lucerne is a fantastic city that makes great use of its lakefront, and there are plenty of shops and stalls offering many things to eat and drink. To strengthen us for our trip back to Zurich, we chose an economical slice of pizza from a stall and sat by the lake to enjoy it.

A City Travel Guide For One Day In Switzerland

Switzerland’s 4 Most Beautiful Cities (By Train)