Elephant child played hide-and-seek game with fun, watching the video will make your day. Viral video of elephant who was playing hide and seek users will love this video

In the world of internet these days a video of little Gajraj is becoming increasingly viral. In which he is peeping from inside the window. The excitement in his eyes is clearly visible in the video. People are liking this video very much.

The pictures and videos of animals look quite adorable every time, so their antics are shared daily on different social media platforms. Some of them look very cute, and netizens also can’t stop saying ‘woooowwww’ or ‘so cute’. One such video is being liked a lot by the users on the internet these days. In this video, a baby elephant is peeping through the window. The enthusiasm is clearly visible in the eyes of the elephant’s child. People are liking this video very much.

In the viral video, you can see that a little Gajraj is seen playing hide-and-seek. The little elephant can be seen wearing a blanket of red and blue checks. The name of the little elephant seen in the video is Peekaboo. First of all, in the video, the little elephant hangs its small trunk and makes the person passing from the front feel its existence. Seeing this video, it seems as if he is playing some hide-and-seek game with someone. If you are also feeling sad, or have a bad mood, then you can refresh your mood by watching this video of elephant baby playing hide and seek. 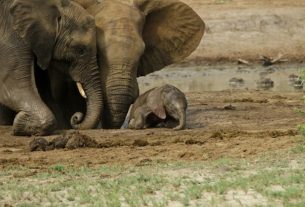