Guests got their money’s worth when a herd of elephants appeared out of the bush to drink out of a private swimming pool on the exclusive Phinda Private Game Reserve in KwaZulu-Natal, South Africa.

More than 60 of the beautiful creatures decided to make use of the resort’s pool, taking turns to drink from it three at a time.

Rangers and visitors at the resort were treated to a very up-close view of the wild animals as specialist guide Mark Lautenbach snapped these amazing pictures. 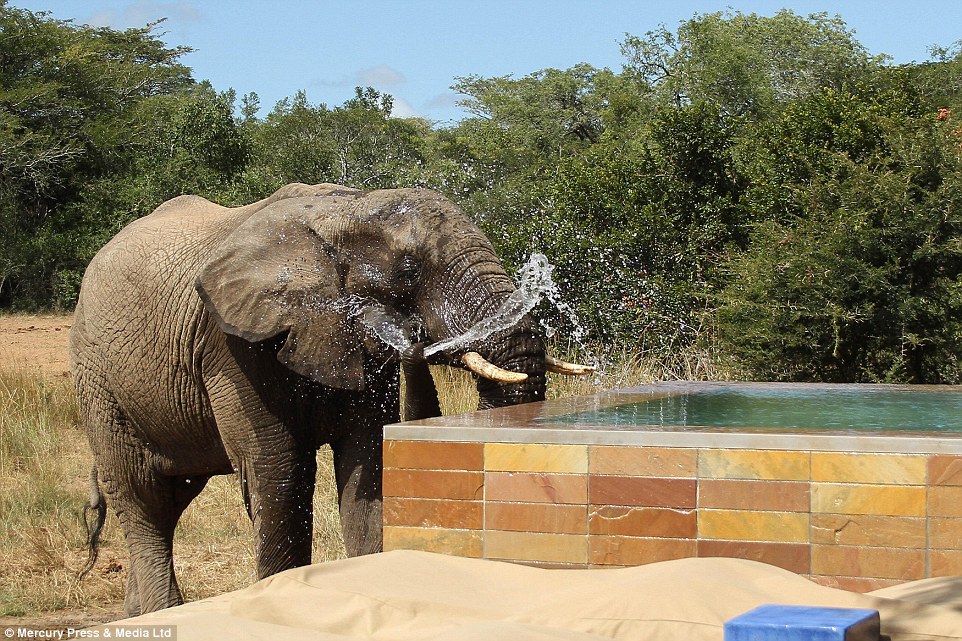 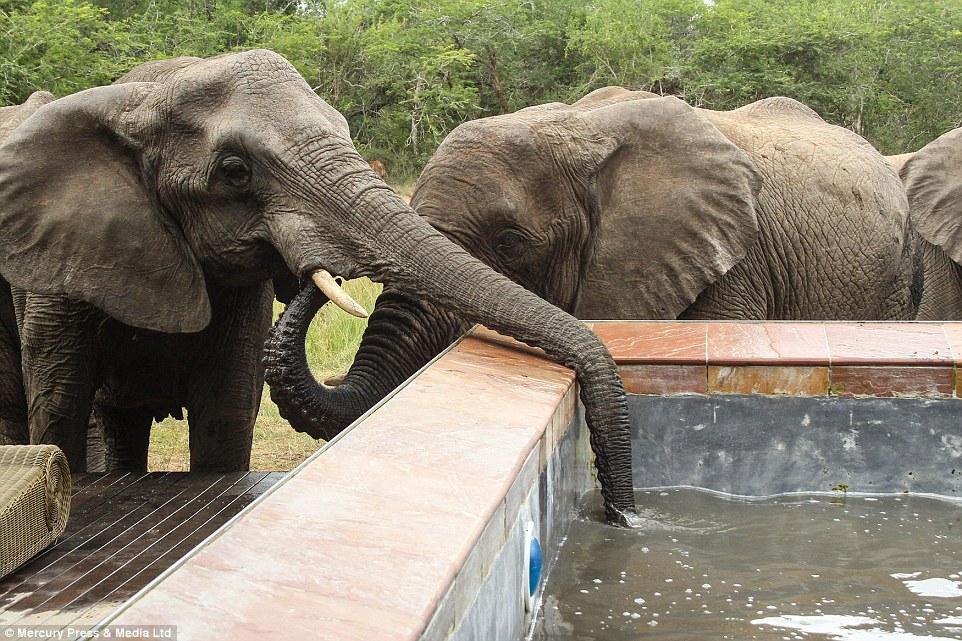 The pool is part of The Homestead, a resort on the exclusive Phinda Private Game Reserve in KwaZulu-Natal, South Africa

Lautenbach, 30, who took the pictures on March 3, has been a guide at the resort for the past eight years.

He said that the elephants had initially arrived to use a nearby waterhole, but soon turned their attention to the lodge.

‘This morning after a rather quiet game drive I had breakfast with the guests and headed off to a rangers meeting in the south of the reserve,’ he wrote online.

‘The lodge I work at – The Homestead – has a beautiful open plan deck, small gym with two rooms on either side and a pool on the deck overlooking a small waterhole.

‘While I was away something spectacular occurred and I was fortunate enough to return just in time to get some photos.’ 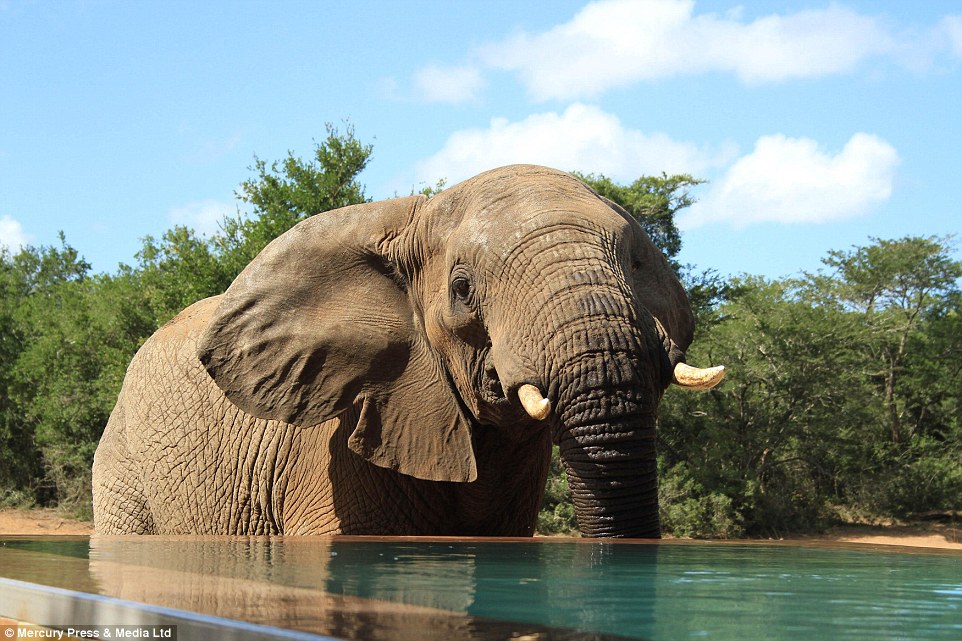 Although there is thick woodland surrounding the waterhole, several herds emerged to go to a nearby waterhole – which was all mud 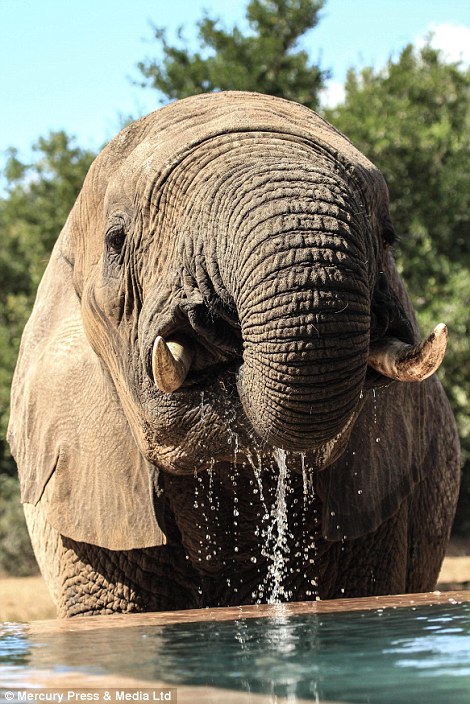 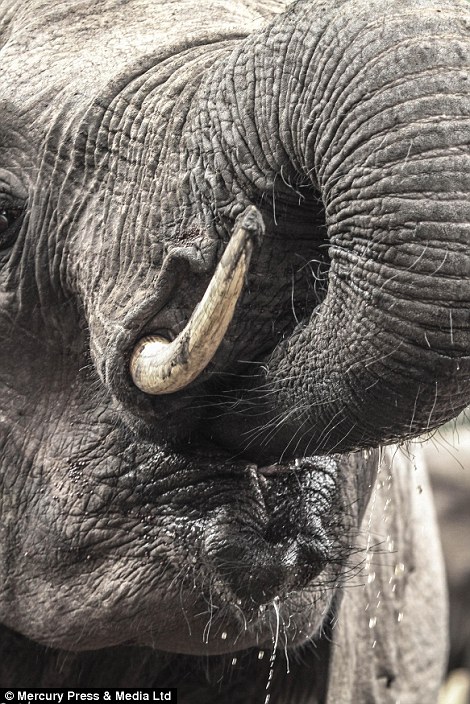 The elephants had initially arrived to use a nearby waterhole, but soon turned their attention to the lodge and its sprawling pool

‘The view from the lodge is rather open with thick woodland beyond the waterhole, but at around 11 o’clock that morning a herd of elephants emerged from the woodlands and came to drink at the waterhole – a usual but privileged site for guests at Homestead,’ he added.

‘They all went to the small waterhole which had now been depleted at a rapid rate and found there to be just mud. 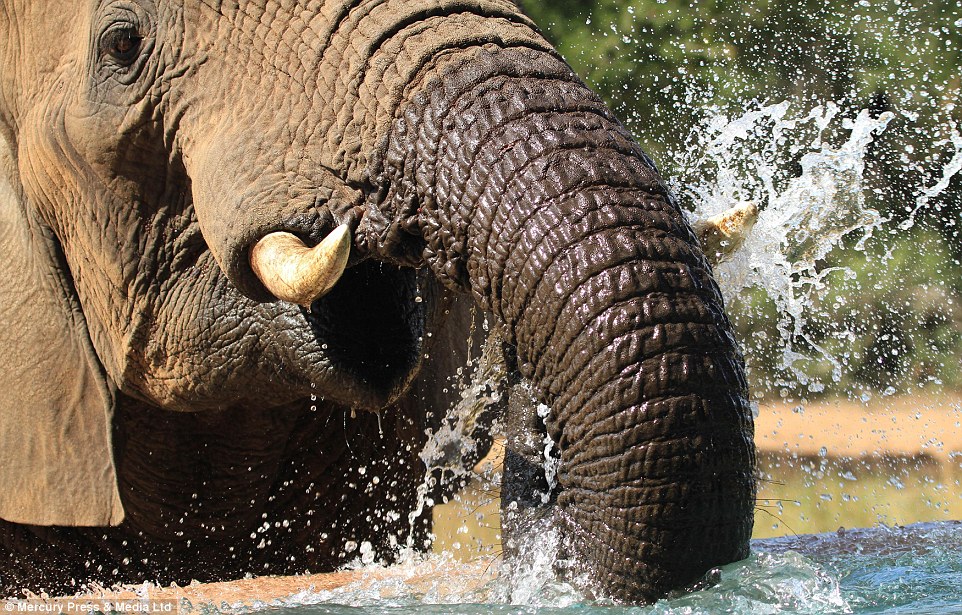 Elephants can drink up to 100 litres of water a day on average and it’s estimated that these herds drank about 6,000 litres in one sitting

‘Instead of moving off to find water elsewhere, they had a mud wallow then turned their attention to the lodge swimming pool.

‘By the time I had arrived there were over 60 elephants all around the lodge drinking from the swimming pool two or three at a time.

‘They did not have the decency to drink first before wallowing in the mud, turning the water muddy brown before finishing over half the pool water.’ 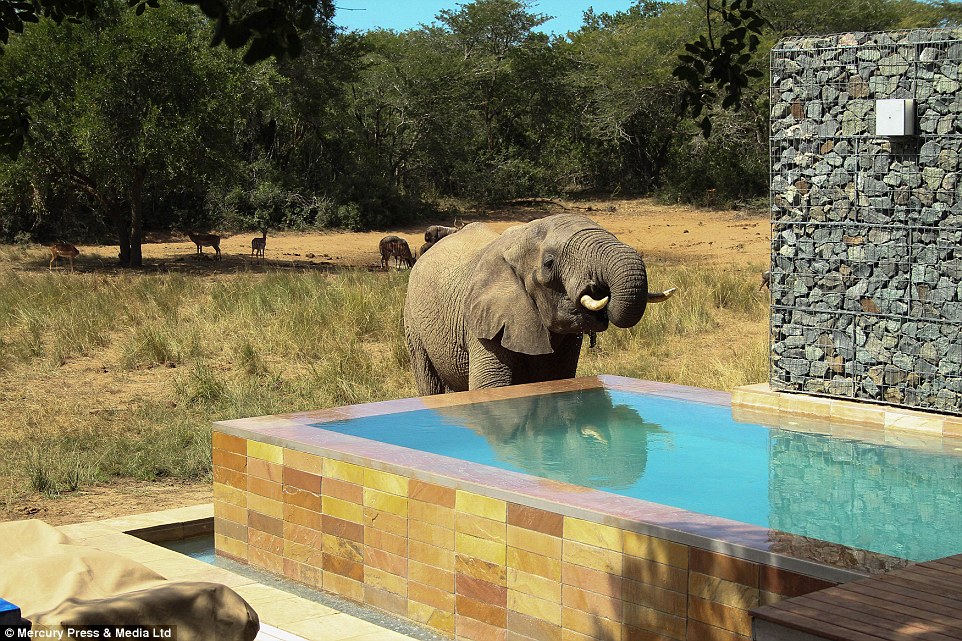 The herd spent over three hours drinking, wallowing and socialising around the lodge before disappearing back into the bush 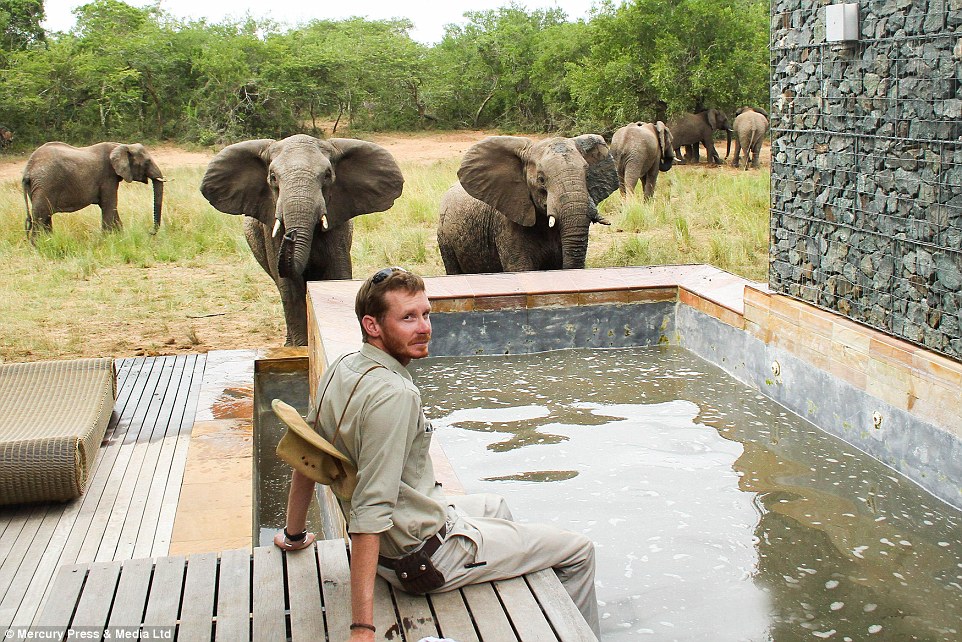 Experienced guide Mark Lautenbach who has worked on the reserve for eight years, was on hand to photograph the amazing sight

‘Elephants can drink up to 100 litres of water a day on average,’ Lautenbach explained.

‘With easily over 60 elephants all helping themselves to the fresh blue waters of Homestead pool, they must have drank over 6,000 litres of water in one sitting.’

Apparently, the elephant herds spent around three hours drinking, wallowing and socialising around the lodge before disappearing back into the bush.

He said: ‘I cannot say it was as if they were never here.

‘It looked like a Thailand beach party after a full moon with piles of stinky, half-digested dung littered all over the front of the lodge and a few bucket scoops of dirty mud water at the bottom of the pool.

‘The deck was splattered with mud and the grass flattened to the ground.’