It was a moment so brief that the thousands of fans inside the Khalifa International Stadium on Wednesday could easily have missed it.

But a moment, the time it took for the photographers amassed in front of Germany’s World Cup team to snap a picture, was all it needed for the four-time winners to send a message to soccer’s world governing body. 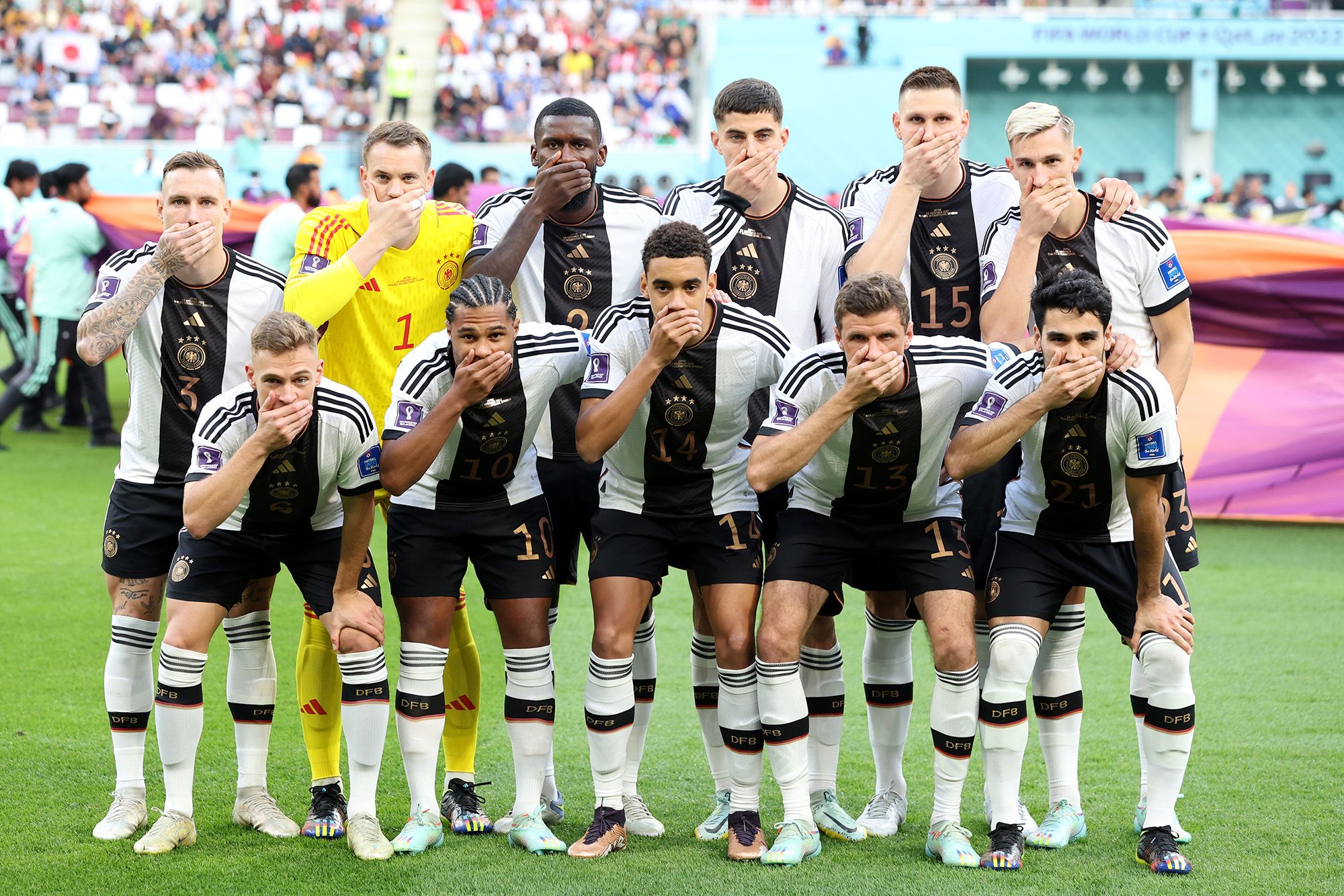 How Qatar ended up hosting the World Cup

Germany’s starting 11 all posed with their right hands in front of their mouths, and within minutes, the image was circulating widely on social media.

And as Germany kicked off their World Cup campaign against Japan in Group E, the team’s social media feed confirmed that the gesture was designed as a protest to FIFA’s decision to ban the “OneLove” armband that many European captains had been hoping to wear in Qatar.

It was a game that produced another World Cup shock as Japan came from behind to win 2-1.

Before the tournament, captains from England, Wales, Belgium, the Netherlands, Switzerland, Germany and Denmark had planned to wear the armbands at the World Cup – – which features a striped heart in different colors to represent all heritages, backgrounds, genders and sexual identities – before FIFA made it clear on Monday players would be yellow carded. 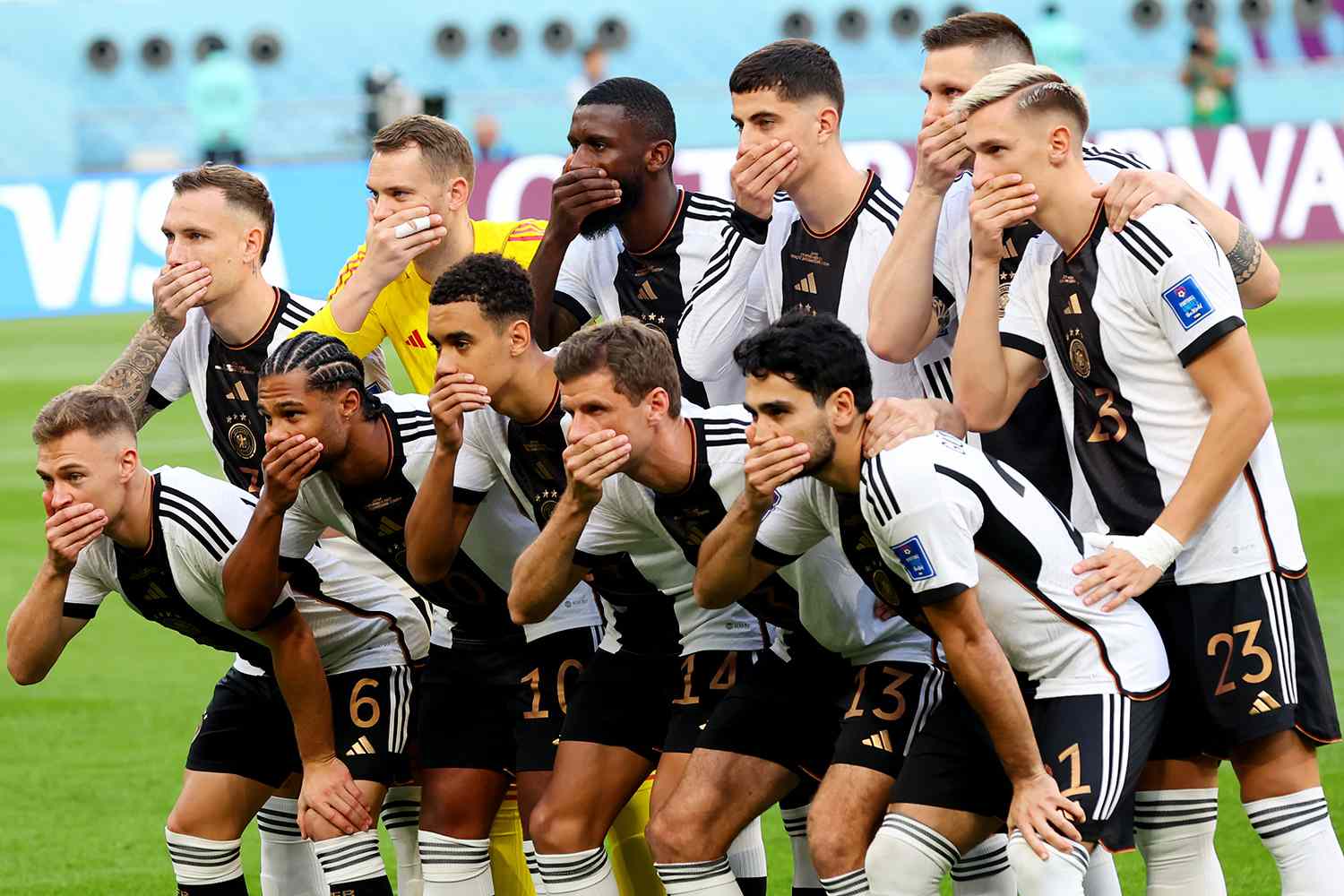 On Wednesday, the German Football Federation (DFB) released a series of tweets shortly after the game had kicked off indicating that FIFA had prevented them from using their voices to speak up at the World Cup for issues they felt passionate about, hence the protest.

“We wanted to use our captain’s armband to take a stand for values that we hold in the Germany national team: diversity and mutual respect,” the DFB said. “Together with other nations, we wanted our voice to be heard.

“It wasn’t about making a political statement – human rights are non-negotiable. That should be taken for granted, but it still isn’t the case. That’s why this message is so important to us.

“Denying us the armband is the same as denying us a voice,’ added the DFB. “We stand by our position.”

Prior to countries announcing their captains would not wear the armband in Qatar, FIFA had brought forward its own “No Discrimination” campaign and said all 32 captains would have the opportunity to wear an armband linked to the campaign.

Nancy Faeser is seen in the stands during Germany’s game against Japan.

Germany fan Nick Boettcher told CNN that it was “sad” that FIFA had taken the stance to deny players the opportunity to wear the armband.

“FIFA is making a lot of questionable decisions and so it’s good that people speak up,” said Boettcher. “I’m very proud that they did that. People will talk about this for sure, and the attention will grow. The pressure on FIFA and Qatar is definitely increasing.”

England fan Samir Cordell told CNN inside that stadium that he was “over the moon” with the protest.

“Germany and the German fans should be proud,” he said. “I’m an England fan and I didn’t like seeing England not wearing the armband. I would have loved to see Harry Kane wear it and get the booking. I think it’s great, I think it’s fantastic. Hats off to them.”

A handful of the starting 11 for Germany, including Manuel Neuer, Thomas Müller and İlkay Gündoğan, wore rainbow flags on their boots.

Germany’s protest comes after both Kane and Wales’ Gareth Bale took to the field on Monday in their respective games without the “OneLove” rainbow armband. Germany captain Manuel Neuer also did not wear the armband on Wednesday.

While Neuer chose not to wear the armband, Germany’s interior minister Nancy Faeser was seen with it on her arm while in attendance for the team’s game against Japan.

Nancy Faeser is seen in the stands during Germany’s game against Japan.

In a tweet, Faeser posted a picture of herself with the armband while in the stands, in what appeared to be a show of solidarity with the national team.

Before the game, Faeser had criticized FIFA, slamming the threat of sanctions for wearing the armband.

“This is not alright, how federations are being put under pressure,” she said during a visit to a German FA event, according to Reuters.

“In today’s times it is incomprehensible that FIFA does not want people to openly stand for tolerance and against discrimination. It does not fit in our times and it is not appropriate towards people.”

In the buildup to the World Cup, Qatar – where sex between men is illegal and punishable by up to three years in prison in the country – has come under criticism for its stance on LGBTQ rights.

A report from Human Rights Watch, published last month, documented cases as recently as September of Qatari security forces arbitrarily arresting LGBT people and subjecting them to “ill-treatment in detention.”

However, the country has insisted that “everyone is welcome” at the tournament, adding in a statement to CNN this month that “our track record has shown that we have warmly welcomed all people regardless of background.”

And since the beginning of the tournament, some people attending World Cup matches in Qatar have said they have experienced difficulties when trying to enter stadiums wearing clothing in support of LGBTQ rights.

At the Ahmad Bin Ali Stadium on Monday, ahead of the United States Men’s National Team’s (USMNT) match with Wales, US football journalist Grant Wahl and former Wales captain Laura McAllister both said they had been told to remove rainbow-colored items of clothing by security staff.

The Prettiest Towns in Germany: 15+ Storybook Villages To Fall For

The History Of Marienplatz In One Minute

In Bamberg Germany: A UNESCO Wonderland in Bavaria