‘‘The cleanup will be a few weeks,’’ one said. But it will take months to check buildings and bridges to make sure they are sound, and many will have to be destroyed.

ALTENAHR, Germany — The volunteers were out in force on Sunday, with friends and neighbors of those afflicted by Germany’s catastrophic floods joined by members of the Technisches Helfswerke — the Federal Agency for Technical Relief.

Established in 1950, the agency is a kind of volunteer FEMA, with 2,000 permanent staff and pre-positioned equipment and some 80,000 volunteers, most with expertise in engineering, water systems, and construction.

Klaus Buchmüller, 51, is a local but also head of the international division, based in nearby Bonn. He was managing teams for much of the flooded region, barking out orders and slapping backs.

This flood reminded him of New Orleans in 2005, where he led a German technical team. “But this was much faster,” he said with a degree of awe.

After filling 10,000 sandbags on Wednesday in the drilling rain, helped by his 13-year-old son, he drove to a vantage point overlooking the Ahr River Valley. “I saw the rush of water hurling down, and I immediately thought, ‘No sandbags are needed’ — the water was too high, finally reaching over eight meters in Altenahr,” or more than 25 feet.

“The flash floods brought so much in their wake — cars and containers and ripped-out trees — that it was impossible to even launch rescue boats,” he added. ‘‘I have never seen such a speeding, rushing river.” 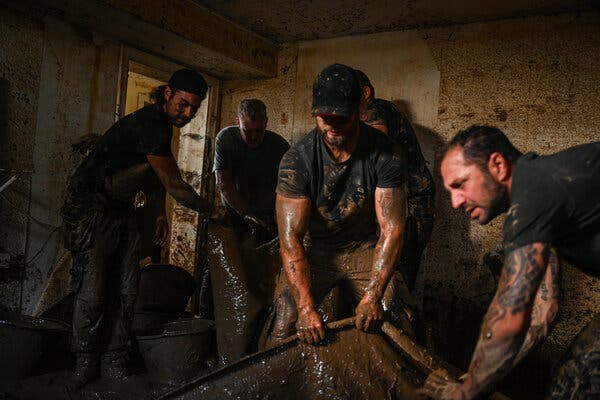 Sven Rudolph, 34, a construction engineer from Wörrstadt, 100 miles away, has been a volunteer for 15 years. He got a message at work on his beeper, he said, and went to the regional headquarters at Sinzig to help.

“My job is to go in and decide which buildings can still remain,” he said. Mr. Buchmüller said that this would be the disaster’s greatest impact, beyond the heartbreak of the past week’s deaths and damage, of course. “The cleanup will be a few weeks,” he said. But it will be many months before all the buildings and bridges can be checked for structural integrity.

“Right now, money is not the problem,” he said. “A lot of these houses will have to be destroyed.”

Maike Haberkorn, 33, went with her husband, Rouven, 46, a nightclub bouncer, to help friends in Heimersheim, a flooded town up the Ahr River.

“The basement is like a dark mudhole,” she said with a shudder. “To be honest, after this, I wouldn’t want to live there. I would always dream of this and never forget it. I would always feel insecure.”

Dirk Wershofer, 48, covered in mud, came to clean out his parents’ home. His mother is 79 and his father, 84, with a bad case of Parkinson’s. They were trapped in an upstairs bedroom, he said, and it was almost 24 hours before his sister could get through to rescue them.

Looking down the devastated street, he said, “This looks more like the result of a war.”

With elections in September, Mr. Wershofer is sure these floods will have an impact. “People right now work, wash, sleep, work and sleep and work again. They don’t think about the government. But in a week they will be very angry.”

Farther upriver, in Altenahr, a pretty tourist town, the destruction is profound. The Ahr curves around the town, and so the flood hit from two directions, demolishing almost everything in its way.

Buildings like the pub and guesthouse, Zum Schwarzen Kreuz, which bears a reference to “the guesthouse on the bridge, 1640,” are so fully ruined that they are likely to have to be demolished. 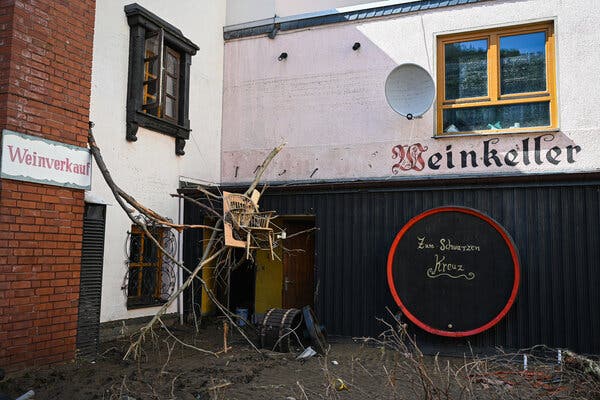 Volunteers labored in the hot sun to clear away detritus like broken glass and timbers and many gallons of mud everywhere.

The Nelles family has owned the Caspari Hotel and restaurant for three generations. They used the lockdown during the pandemic to remodel and repaint. They put new electrically operated umbrellas in the big open space outside. Bright red geraniums still shine perfectly on the two upper balconies, where the stucco is freshly painted.

But the rest is ruined, said Stephanie Nelles, 45, who now runs the place and who was deciding on Sunday what, if anything, could be salvaged from the basement, ground and first floors. Bottles of wine in this region of wineries were covered in mud, their labels unreadable.

The family has three buildings here, all badly damaged, and Ms. Nelles is trying to keep her parents away. “It’s their life’s work, and I don’t want them to see it like this,” she said. “And the saddest thing is that they know people here who haven’t made it.”

Everyone in the family is alive, at least, she said. “But sometimes it gets really bad and you just start crying.”

One of the saddest stories is that of Mentor Krasniqi, 46, who came to Germany as a refugee from Kosovo and worked as a barman. Four years ago he managed to buy a restaurant and old stone house with a huge open cafe area in front that could sit 350 people. He turned it into a popular Western-style saloon, with a country-music band on Sundays.

It is completely ruined now, he said. Only an hour before we met, engineers told him the whole structure would have to be destroyed.

Mr. Krasniqi sat with friends from Kosovo in the ruined muddy courtyard, his head in his hands.

“Everything is lost now: the car, the houses, the bar,” he said. He had lived through the war in Kosovo, he said, looking around at the devastation. “This is much worse, because it came so suddenly,” he said.

Asked if he regretted coming to Germany, he shook his head sharply. “This Germany is my homeland now,” he said. 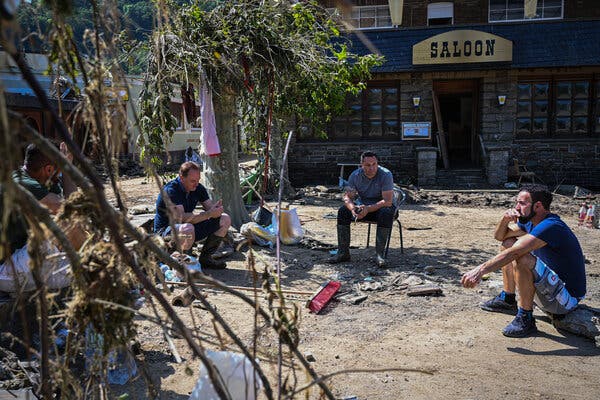 8 of The Most Beautiful Towns in Germany

Everything About Lichtenstein Castle