Staying safe at Australian beaches is as easy as following some basic rules. Here are our tips for having fun in the ocean. 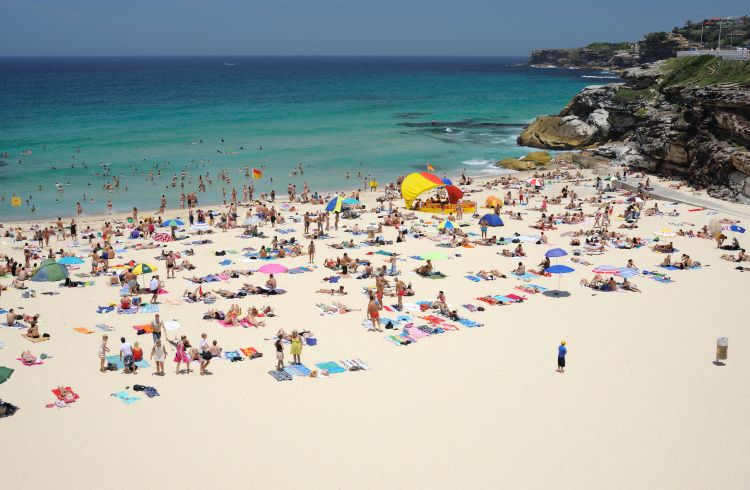 Australia is known for its incredible coastline and spectacular, unspoiled beaches. And with 85% of us living within 50km of the coast, Aussies love the beach as much as visitors. As with any beach activity, there is a level of risk, including strong currents, stingy things and sunburn, but with good planning and a sensible approach to water safety, you will have an amazing time on Australia’s beaches.

Where can I swim or surf?

Where possible, always swim or surf at patrolled beaches. Traveling around Australia you will find that many beaches are not patrolled, with some being rugged, isolated parts of the coastline.

While many of these isolated spots are beautiful, if you were to get into trouble it could take longer for help to arrive. Some locations also have poor cell phone reception.
So always let someone know where you are going and when you will be back. Better still, head there with friends.

Never dive into water, even if it looks deep enough. Sandbars can occur anywhere, and they’re hard to spot. Lifeguards deal with almost as many spinal injuries as d.r.o.w.n.i.n.g.s.

When at patrolled beaches, the first thing to do is pay attention to any signage, particularly if the signs say the beach is closed. This is not because the lifeguards are on strike, it’s because the water is considered too dangerous. This could be because of rips, shark sighting, jellyfish etc. Don’t disobey any signage or instructions from lifeguards, they are there for your safety.

When lifeguards are on patrol, the safest place to swim is between the red and yellow flags. The flags are placed at either end of the areas of the ocean the lifeguards consider to be safe to swim in. These spots are also for swimmers only – if you are surfing don’t do it between the flags (lifeguards may confiscate your board) – surfing spots at patrolled beaches are delineated by black and white checkered flags. Swimmers should avoid these areas unless you want to cop a board to the head.

In summer, particularly at popular beaches like Bondi and Manly in Sydney, it can get very crowded – on a busy day Bondi Beach can have more than 50,000 people on it!

Make it easier for lifeguards to keep so many people safe by following their directions. They will use whistles, sirens, loudspeaker announcements, hand signals and verbal directions to keep beach-goers safe.

Many of Australia’s beaches have rips, powerful currents that can drag a swimmer out to sea. Rips can behave in many different ways and are influenced by the morphology, swell, waves and other factors.

Surf Life Saving Australia considers rips to be the number one hazard on Australian beaches (yes, it’s not sharks despite the media hype). Many people have d.i.e.d or come close to d.e.a.t.h by panicking or trying to swim against the rip trying to get back to shore (19 people d.i.e.d in rips in 2017).

If you find yourself caught in a rip, don’t panic (easier said than done). A rip will flow against the waves back out to sea, so if you swim parallel to the beach into the breaking waves, after just a few meters you can often swim out of it.

You can also float and go with the rip, because it will often disperse just beyond the breakers, as long as you are a strong swimmer to then get yourself back to shore.

If you are in trouble and need help from the lifesavers, raise one arm up in the air and wave.

Stingers, including Irukandji and box jellyfish, are mainly found in the waters of northern Australia and as far south as the Whitsunday Islands in Queensland. Their numbers peaking between November and May, however, they are found all year around. Irukandjis are transparent and small, which makes them hard to see in the water. Their sting causes localized pain, disorientation, respiratory distress, and more. Box jellyfish are bigger than Irukandjis, and their sting is reportedly more painful, and causes noticeable wounds.

If you are stung by an Irukandji or a box jellyfish, immediate first aid is vital. Call 000 and rinse the area with vinegar. Carefully remove the tentacles with tweezers. Reassure the patient and keep them calm. Perform CPR if necessary until medical help arrives.

Throughout northern Australia, some beaches are closed during the peak period for these creatures from November to May, yet another good reason to read signs on beaches.

If you are at an unpatrolled beach and have been stung by anything you think may be lethal, dial 000 for emergency assistance. The operator will then guide you as to the best course of first aid or treatment.

N.o.n-l.e.t.h.a.l, but painful nonetheless, bluebottles are small bright blue jellyfish which are quite easy to spot.

You will know if and when bluebottles are present at a beach as they are often washed up along the shoreline. Some people, especially children, find the sting painful, others say it causes a mild itch.

The best treatment is hot water (as hot as you can stand), or ice. Run the sting under the hot water until it comes out. Again, pick off any tentacles (not with your fingers!), don’t rub with sand, and don’t use vinegar.

The pain goes away after 15 to 30 minutes, and the red welt will disappear in a few days.

But there are things you can do to minimize the risk of a shark bite. Check out our article on being shark smart.

While an Australian summer will do wonders for your tan, many travelers underestimate the harshness of the Australian sun. Red, roasted Brits and Europeans on Australian beaches are a common sight, but this can be prevented. Always slip, slop, slap; slip on a shirt, slop on a water-resistant, broad-spectrum sunscreen (at least 30+) and slap on a hat. Don’t forget your sunnies too.

Always reapply sunscreen after being in the water or if you have been sweating.

It’s essential to cover up and protect your skin from the UV rays during the hottest parts of the day (between 10am and 3pm). Seek shade where possible and always stay hydrated.

Sunburn is painful and can take days or weeks to go away depending on the severity. Melanoma (skin cancer) is a major issue in Australia with an estimated 14,000 cases diagnozed each year.

14 Experiences You Can Have Only In Australia And Nowhere Else