Wallowing in the mud is glorious fun for elephants young and old. But when you’re still only a baby, trying to stand up again in all that lovely slippery stuff when playtime is overtaken a mammoth effort.

Just look at this adorable little chap. After fighting a losing battle to get back on his feet on his own, which saw him land unceremoniously on his backside, there was only one thing for it – make a trunk call to mum.

The baby’s trumpet for help was captured in these photographs taken during a torrential downpour in the rainy season in the Maasai Mara game reserve in Kenya. 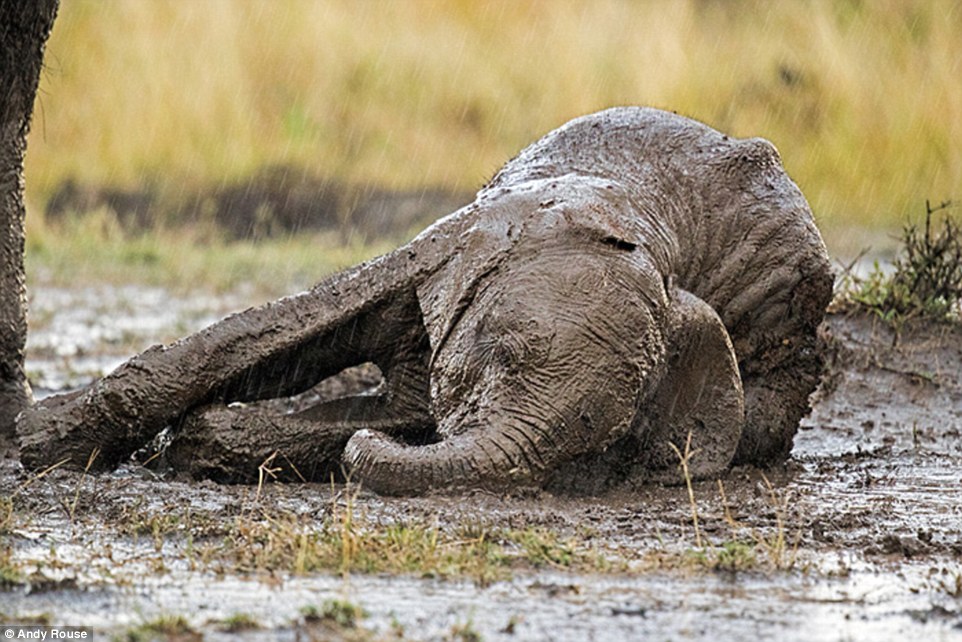 ‘This mud bath has gone wrong mum, I can’t get up!’ This poor little fellow was left in a slippery position after a deluge in the Maasai Mara 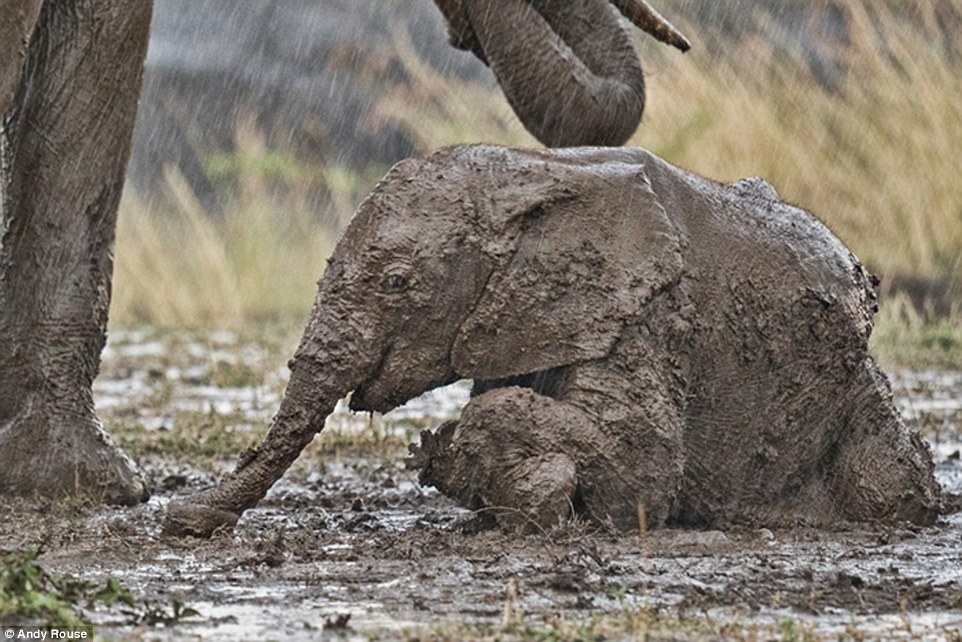 ‘I’m trying, Mum, but I just can’t make it’ — the young animal struggles to get to his feet but is getting exhausted and ever muddier 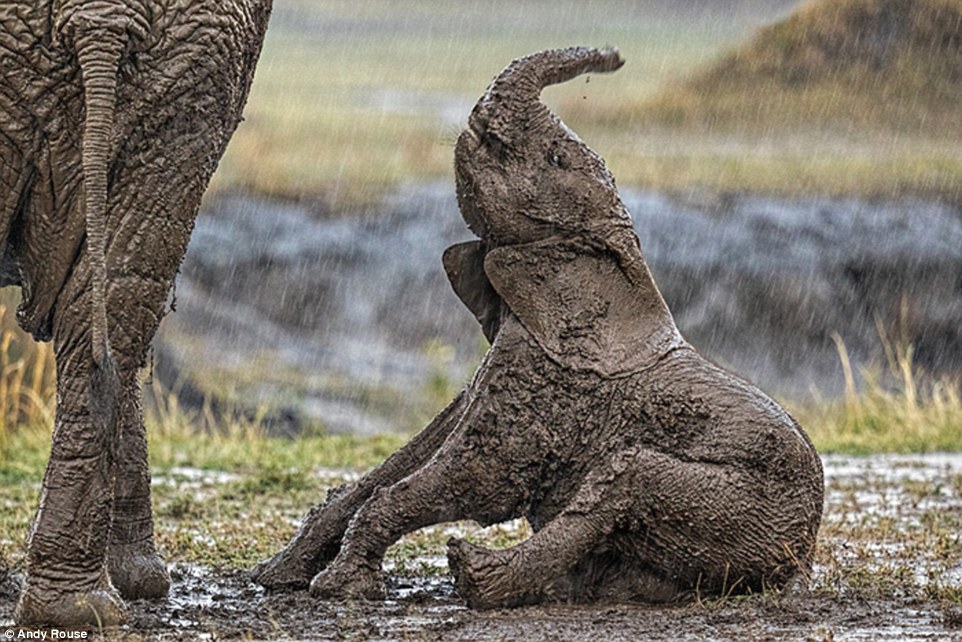 ‘Pick me up, please!’ the baby elephant trumpets to Mum in distress as the conditions in Kenya send him falling straight back down on his bottom

The African elephant, thought to be aged six months to one year, had toppled over and was becoming ever more caked in mud as he thrashed around.

But it wasn’t long before his mum came to the rescue, moving nearer so he could shelter under her massive frame before ensuring that his next attempt to get up — using her legs for support in the sodden conditions — was successful.

Eventually, he was upright again and they were able to move off together — but it wasn’t long before she sat back down for a relaxing bath herself and much-deserved rest.

‘We saw a group of elephants go high-tailing it past quite fast,’ he says. ‘When it’s raining they know areas which are going to flood and be really good for mud wallowing.

‘They slid right into this waterlogged patch of ground and were loving it. They were in the wallow for about 30 minutes. They like frolicking in the mud, and getting mud on their skin also protects them from the sun and insect bites. 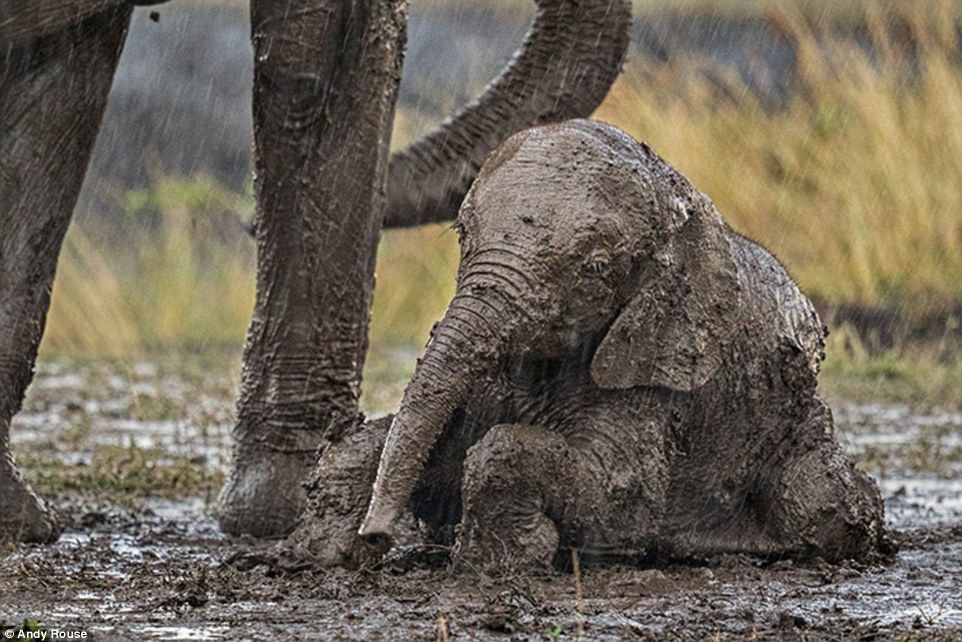 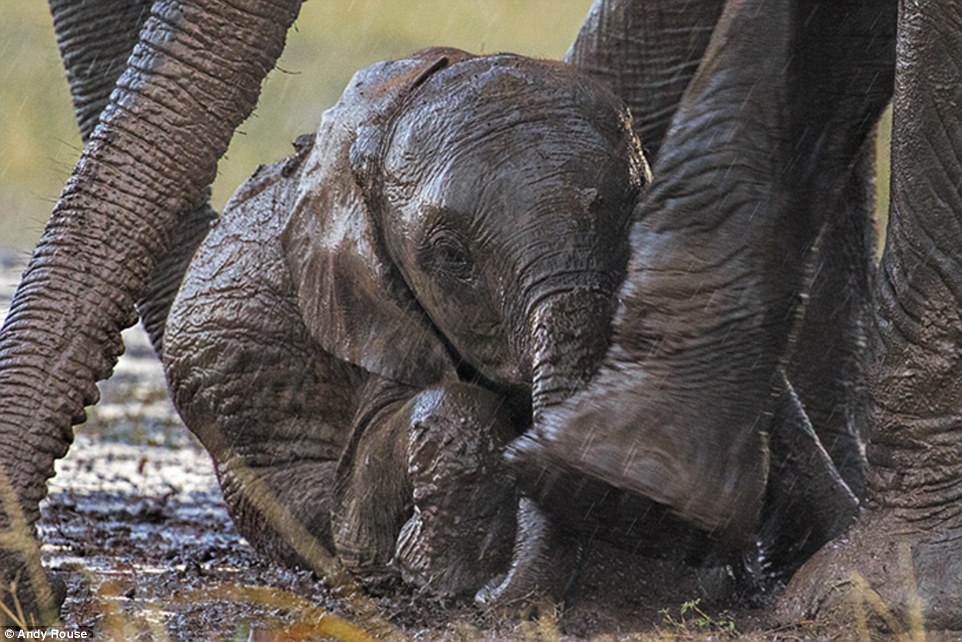 ‘Under here, darling…’ It’s Mum to the rescue as she shelters her son and uses her foot to nudge him upright. The African elephant is thought to be aged six months to one year 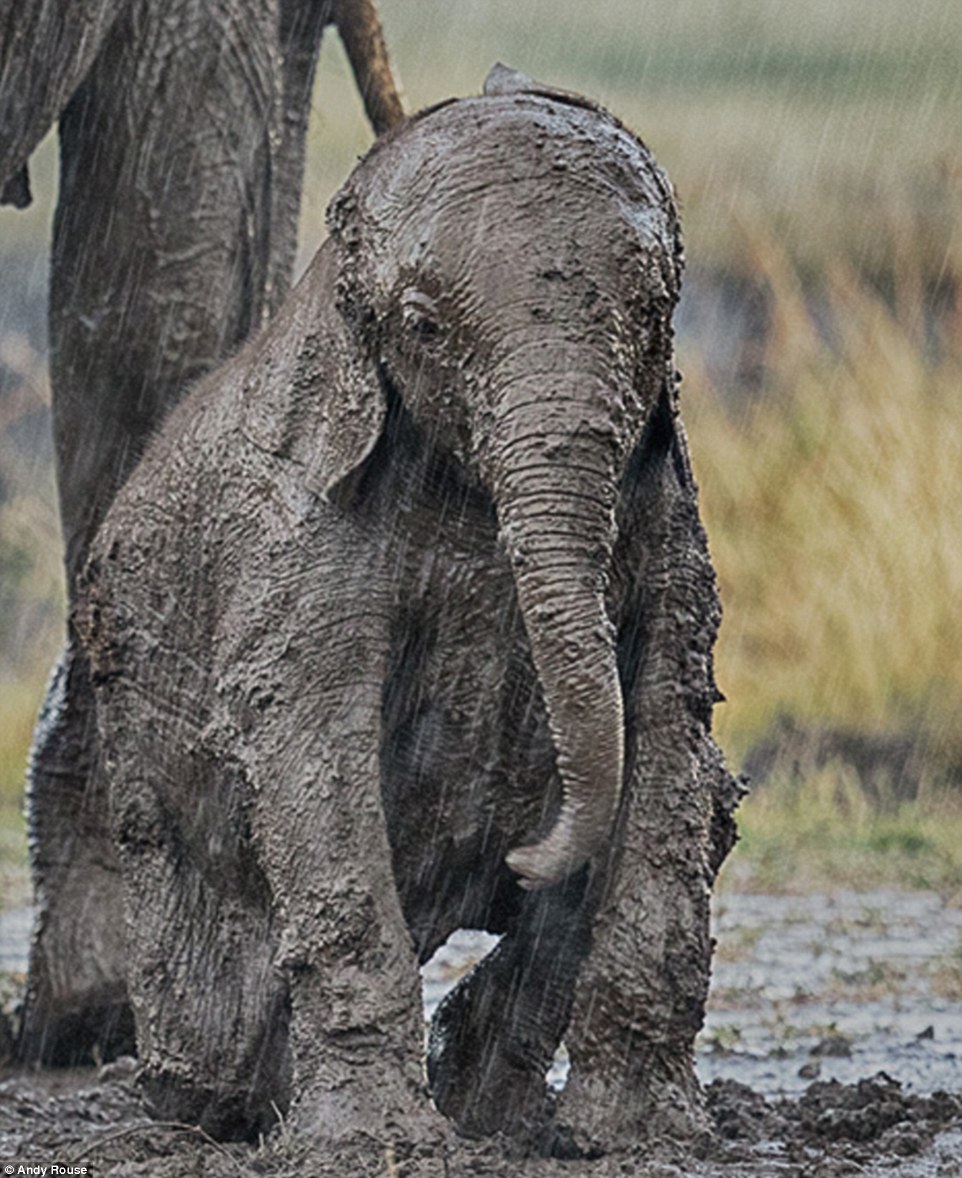 ‘But for the little ones getting up again can be a nightmare. It took this one about five minutes. He managed it after finding shelter between his mother’s legs. Her legs gave him something solid to back up against so he could stand up.

‘It was really comical to watch, and also a very beautiful and very special experience for everyone.’

African elephants, which live for up to 70 years in the wild, are slightly bigger than their Asian cousins and are the largest land animals on Earth.

Having a baby is a serious commitment for elephants, with females usually giving birth to one calf every two to four years after a pregnancy of 22 months, a longer pregnancy than any other mammal.

So if it takes a few extra minutes to help junior out of the mud, little wonder mum’s only too happy to wait. 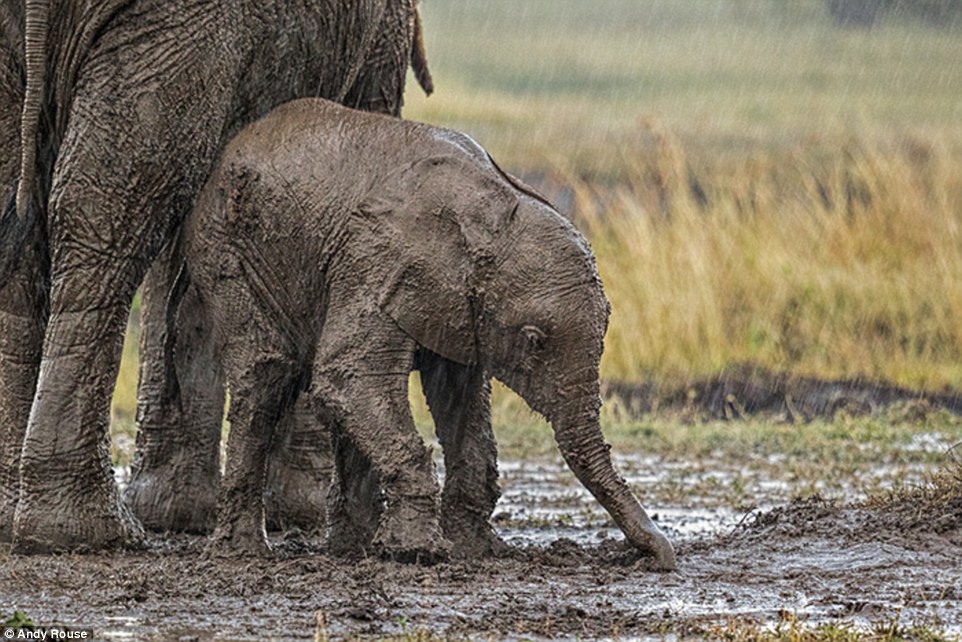 ‘Phew, that’s much better’ – baby’s back on his feet after a helping hand from his mother who stood over him for a bit of extra support 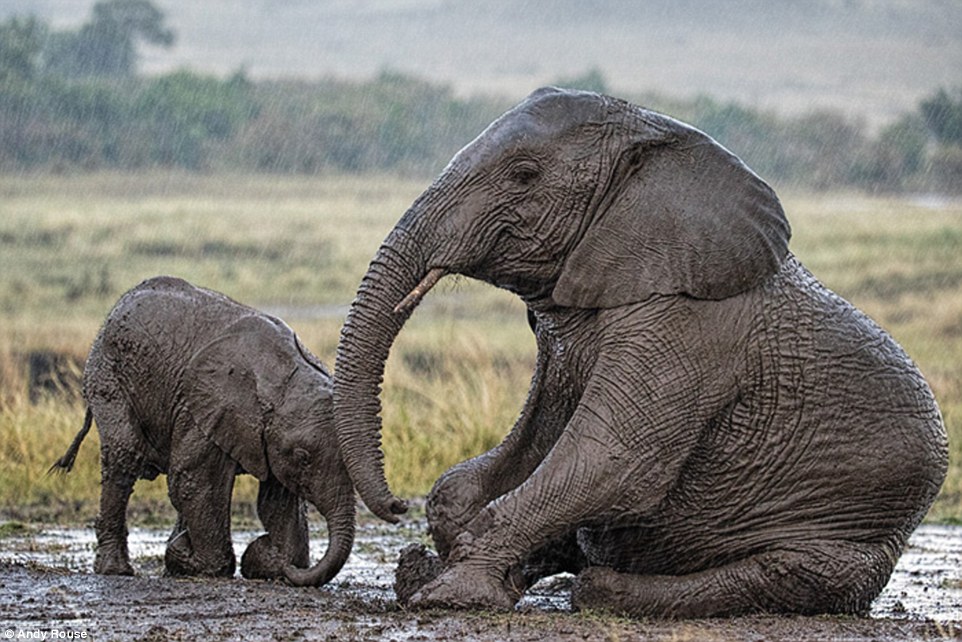 ‘Aww thanks, Mum, you’re a marvel’ — and now it’s mum’s turn to take a rest as she sits down in the mud following a job well done 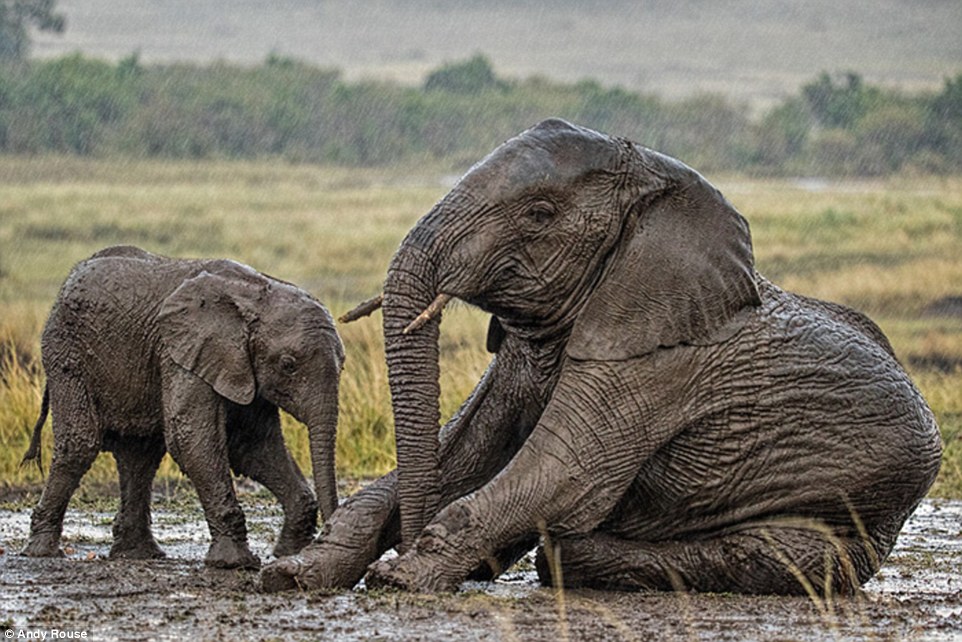 African elephants, which live for up to 70 years in the wild, are slightly bigger than their Asian cousins and are the largest land animals on Earth

By DAVID WILKES and ANDY ROUSE FOR THE DAILY MAIL