Whether you’re a foodie looking for the freshest produce, a fashionista looking for vintage finds or a vinyl junkie digging for gold, the markets of Lisbon deliver the goods. Follow Culture Trip’s guide to the best markets in the Portuguese capital.

Markets have been held in Lisbon for centuries and are still very much a part of city life there. Residents and tourists mingle with top chefs at produce markets, fashion shoppers haggle over jackets and jewellery at vintage-clothing fairs, and DJs wrestle with record collectors, crate-digging for rare vinyl at flea markets.

Many of Lisbon’s biggest and best markets occupy vast historic buildings or take over entire neighbourhoods, so set aside a few hours to dig out the best bargains. There’s almost always a good range of lunch pitstops, with tasty traditional street snacks and cold drinks at affordable prices.

It’s off the tourist track, but that’s part of the charm of this sprawling Sunday street market on an enormous roundabout in the residential neighbourhood of Olivais (take the Metro to Bela Vista). It’s Lisbon’s largest street market. Come early for the best bargains and bring plenty of sturdy shopping bags: you can load up with everything from fresh fruit and flowers to antiques, cut-price clothing and electricals. There’s even furniture, should you have the means to transport it home. 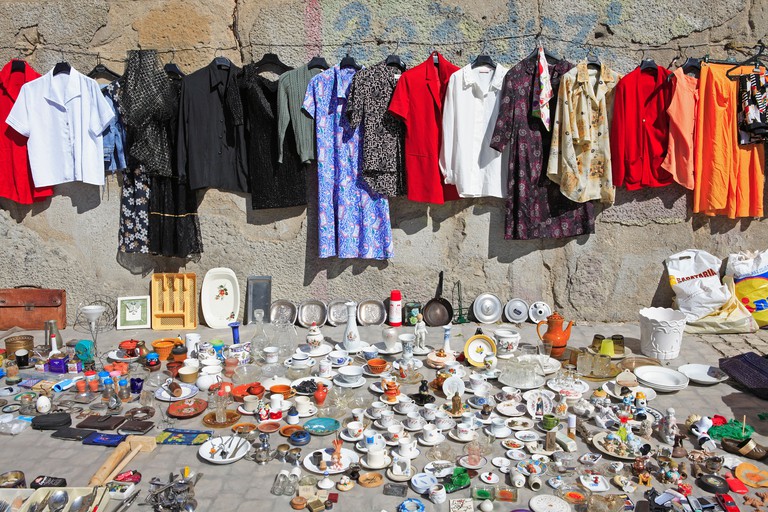 It’s impossible to discuss Lisbon shopping without mentioning the Feira da Ladra, or “thieves’ market” – not a hotbed of crime and stolen goods, but a giant twice-weekly flea market spanning several hilly streets on the edge of Alfama. Operating in one form or another since the 13th century, it has occupied this location since the late 1800s. Expect to find the lot: arts and antiques, handmade jewellery and vintage vinyl, but watch out for bumped up “tourist prices”. 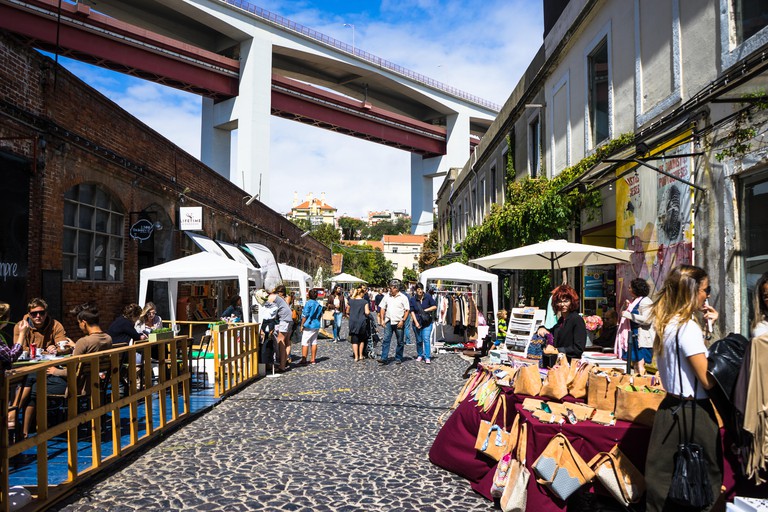 The Sunday market at hipster hotspot LX Factory attracts on-trend shoppers like well-dressed bees to an organic honeypot. The location is a large part of the attraction – the premises of a former fabric company converted into funky bars, hip places to eat and trendy shops, right underneath the city’s landmark 25th of April Bridge. You can celebrate your latest purchases – vintage designer garb, handmade jewellery, rare vinyl – with a cocktail or two on the terrace at Rio Maravilha. With terrific views over the River Tagus, it’s the perfect place for a leisurely Lisbon sundowner. 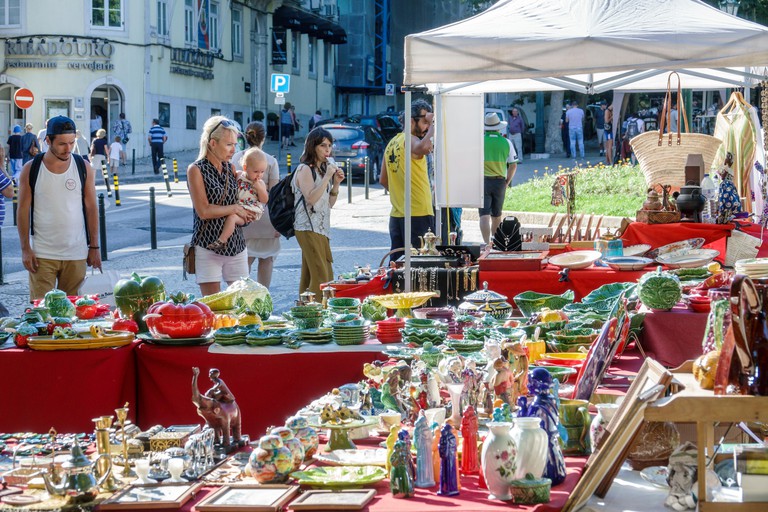 Lisboetas like to compare their elegant, tree-lined Avenida da Liberdade to the Champs-Élysées in Paris, and this popular flea market takes place in the shade of ultra-high-end stores such as Prada and Armani. The top personal shoppers agree: there are stacks of bargains to be found amid the well-polished antiques, second-hand books and coveted collectibles. Just don’t be afraid to haggle – it’s part of the tradition. 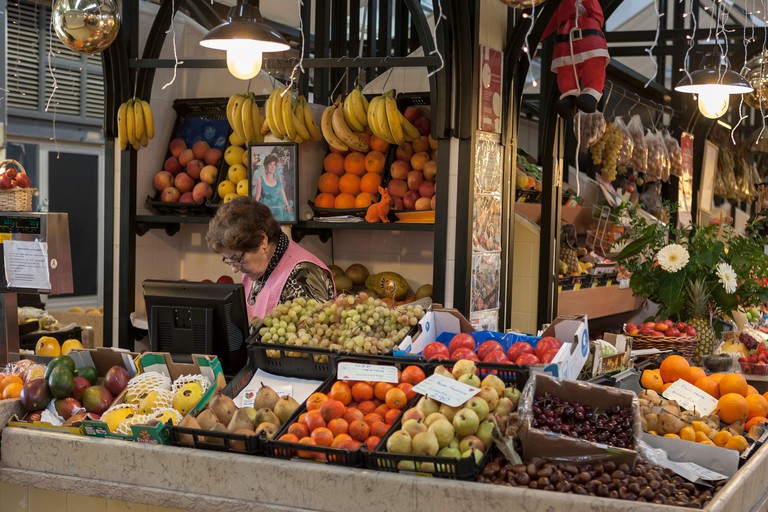 A produce market has been held in this handsome domed building since the 1930s. Following a major overhaul in 2013, it’s now a space for live music, long lunches and shopping: foodie treats include cured meats, locally produced cheeses and fresh fruit. It’s located in one of the prettiest residential parts of town, a short walk from the Basilica da Estrela, and the communal dining area is a perfect place to refuel. Try the Levante Kitchen for delicious hummus, or first-class steaks at Atalho. There’s a wine bar, too, should you need further incentive to visit.

Style shoppers on a budget crowd into this funky monthly flea market in the newly gentrified Anjos district. It’s been around for a decade now at Anjos 70, a former glass warehouse turned cultural centre (recent events have included DJ sets and breakfast discos). In this split-level space you’ll encounter more than 100 vendors from across Portugal, selling artsy home furnishings and collectibles, as well as vintage fashions and hand-crafted accessories.

This well-established Saturday book fair in the smart, tourist-thronged Chiado neighbourhood attracts bookworms from across the city with its rare first editions and collectible comics as well as inexpensive second-hand books of all genres. It isn’t exclusively Portuguese publications – you’ll also find plenty to read in English. There are coffee shops nearby, if you need somewhere to park yourself and flick through your new literary finds over a cafezinho and a custard tart. 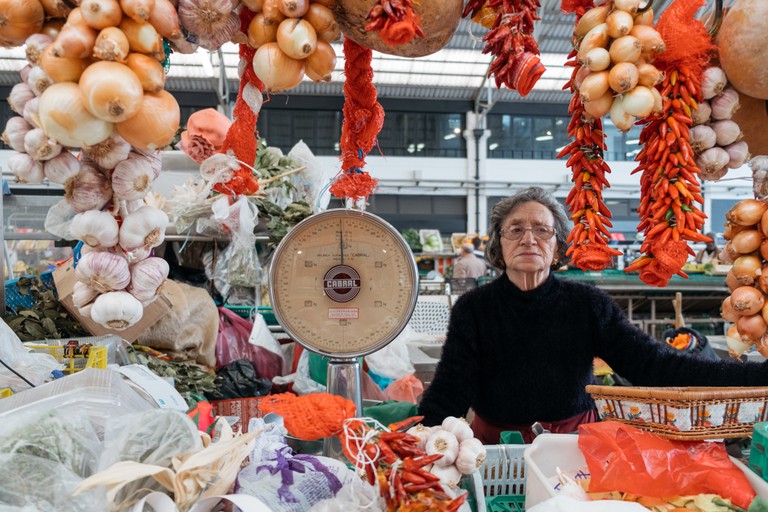 A large chunk of this sprawling domed 19th-century market hall was given a radical makeover in 2014, emerging as the Time Out Market. But the other half of the property continues to operate as a traditional fish and produce market until 2pm each day, with vendors selling super-fresh wares for much less than at nearby grocery stores and supermarkets. It’s a wonderful place to wander with a camera, past icy banks of silver fish from the deep, gaping up at you like extraterrestrial monsters.

Lisbon’s pretty Jardim da Estrela makes a lovely setting for this monthly artisanal and design market, selling locally produced clothes, arts and crafts – everything from baby toys to bicycle bags, home accessories to footwear. It’s not the largest or the cheapest in town, but it makes for a lovely day out. During the summer, you’ll often hear live jazz often tootling away in the background and there’s a splendid little veggie-friendly organic café at the entrance to the park.

Every Saturday between 8am and 2pm, in the super-trendy, very upmarket neighborhood of Príncipe Real,you’ll find this excellent food market, which specialises in farm-fresh and organic produce (as well as handicrafts and bric-a-brac). Expect to find the kind of delectable edibles you can take home as gifts, such as home-made cakes, organic wine, local honeys and cheeses. There are also stalls piled with fruit, vegetables and Instagrammable cut flowers.

These convenience stores are a fixture of Portuguese life, with more than 100 nationwide. So far, so usual, but the latest branch has a difference: it’s opened on Martim Moniz Square, a multicultural part of Lisbon named after the medieval knight Martim Moniza, and when you bag your fresh fruit and vegetables the idea is to use paper bags or washable cotton bags, as this area is 100-percent free of disposable plastic. It is the brand’s second store in Lisbon to adopt the single-use-plastic-free policy, following Alta de Lisboa’s Continente Modelo. This makes it an honorary market in our books – and eating Portugal’s colourful crops is now a sustainable as well as healthy option. 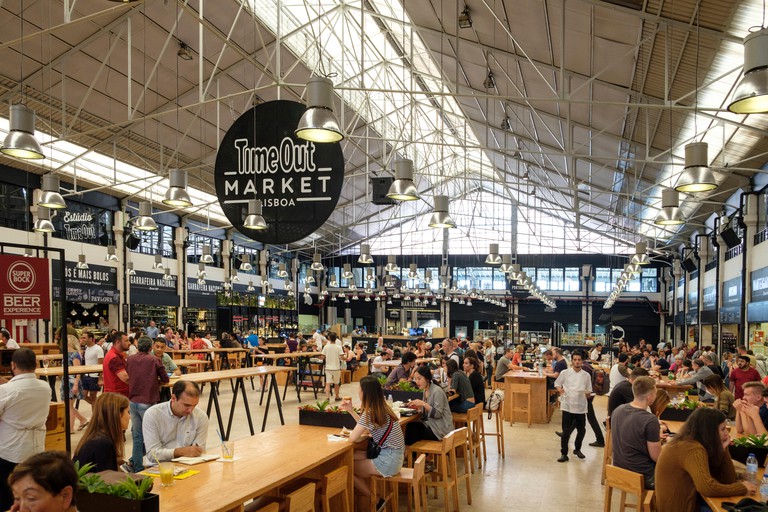 It’s hip to be square at the food hall in the Mercado da Ribeira at Cais do Sodré, where locals mass to buy their meat and fish. Tucked in here, among the old-school 1930s iron-built market, is a unique and cool concept: every item has been selected (and, crucially, tasted) by the team behind city-listings experts Time Out Lisbon. You could easily lose a whole day sampling food by some of Portugal’s top chefs, from more traditional croquetes to salads with seaweed. Follow your nose to the outpost of Lisbon legend Manteigaria, whose perfect pasteis de nata – Lisbon’s emblematic custards tarts – are baked daily.

Perhaps the balls kicked around at the famous football stadium minutes away inspired the domed appearance of this slightly brutalist 1970s-built market, situated in one of Lisbon’s oldest residential neighbourhoods to the north of the city. Even if you don’t want to shop, it’s a fab snap of city life: one of the largest and cheapest markets in Lisbon. But given the abundance of fresh fruit, vegetables, meat and seafood, with the added attraction of delicious baked goods and freshly cut flowers, you probably will end up buying something tasty. 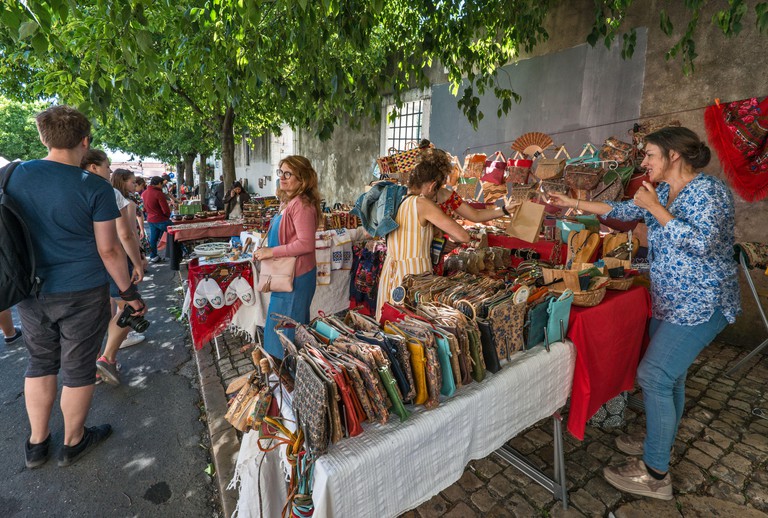 Adjoining the sprawling Feira da Ladra flea market in the steep streets of the historic Alfama neighbourhood, the Mercado de Santa Clara began by vending food. It has since been joined by a Centre for Culinary Arts and adjacent stores peddling crafts and antiques. You’re bound to find goodies for an alfresco lunch. When you have – and after nipping into the Sao Vicente de Fora Church for the exceptional tiled interior – set out your picnic in the small park in front of the Santa Engrácia Church (aka the National Pantheon), admiring the bone-white facade.

14 Most Charming Smalls Town In Portugal

A Guide to Portuguese Sandwiches