Lush mountains, meandering rivers and hilltop villages await visitors to Portugal’s understated countryside. But where’s best place to stay, eat and enjoy a vinho verde? Our tipsters have the gen

Winning tip: A chilled white, above the plains

We had our best glass of Portuguese wine on the whitewashed rooftop of a tiny shop in the medieval hilltop village of Monsaraz, on the Spanish border. Local family winemakers Ervideira has one of the best spots to relax after a morning walking the town’s winding passages, scrambling around its castle and visiting the flower-filled 16th-century church. Ask in the shop for a bottle of crisp Invisivel white wine and head up some creaky stairs to the sun-trap terrace, overlooking the plains of Alentejo and across to the Spanish border. We were even invited for a guided tour of the family vineyard, 20 minutes down the road. The wine sold at shop price, no extra corkage – from about £5 a bottle. 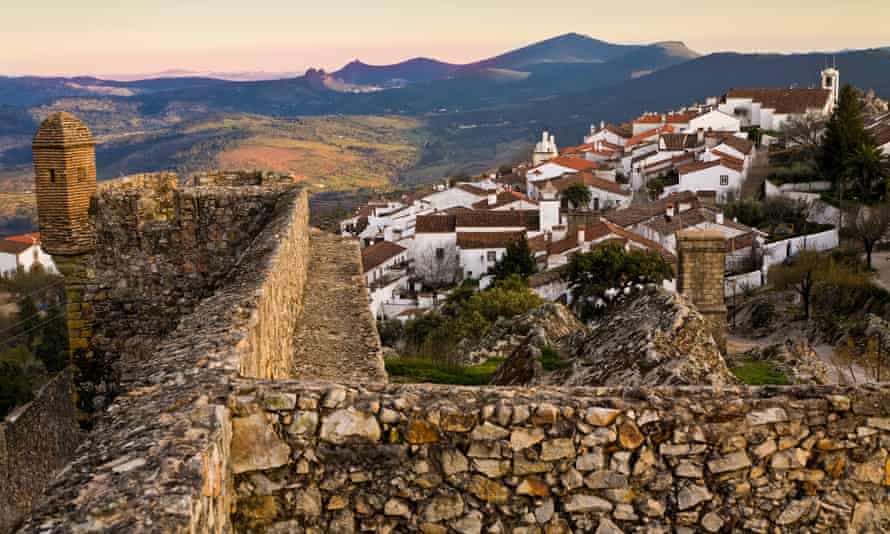 On the highest crest of the Serra de São Mamede mountains stands the peaceful town of Marvão. A picturesque walled town of white houses, narrow cobbled streets, Gothic arches, Manueline windows and a magnificent castle with panoramic views of the surrounding Alto Alentejo countryside and the Spanish border. Trek through cork oak and olive trees rich in birdsong, breathe in the distinct aroma of nature and walk along ancient cobbled Roman roads (walks at webb.ccdr-a.gov.pt). At the Roman ruins of Ammaia there is a 3D-reconstruction of this first-century town, an impressive glimpse into the past. An excellent trip to take is horse riding with Caballos Marvão through the hills, guided by the wonderful Dr José. We had a typical Alentejo picnic of Portuguese black pig sausage and Nisa cheese (sheep’s milk) with local bread during a rest stop. At the end we met his charming wife for a glass of red wine and roasted chestnuts, a speciality of the region – there’s a chestnut festival in the autumn.

Floating down the Lima 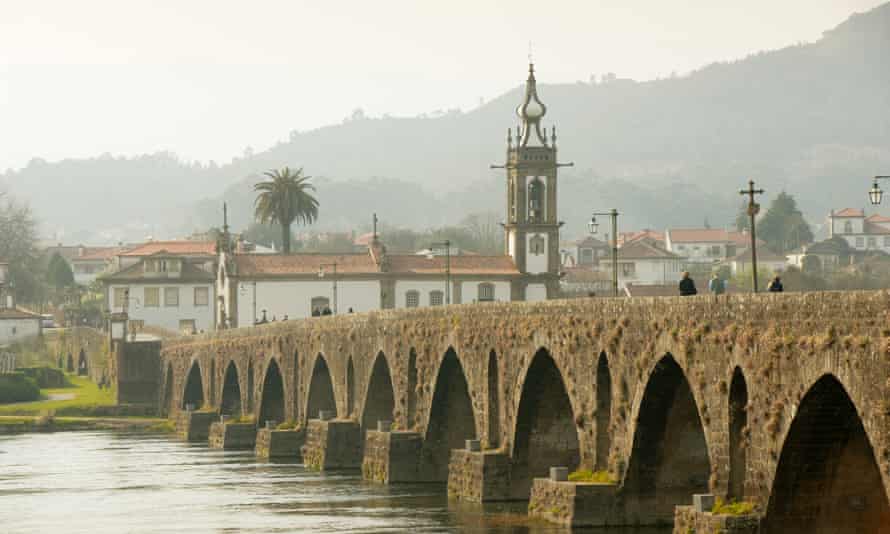 An hour’s drive north of Porto, the Minho is a region of stunning natural beauty. Head to the beautiful town of Ponte de Lima, one of the oldest in Portugal, and hire a kayak from Clube Nautico. The lovely river Lima meanders gently, and paddling around is a breeze. Pull over to the grassy riverbank, cool off in the shallow, crystal clear water and enjoy a picnic, and perhaps a chilled glass of the local vinho verde, in the shade of the gorgeous medieval bridge which gives Ponte de Lima its name.
Kayaks from cnplima.com 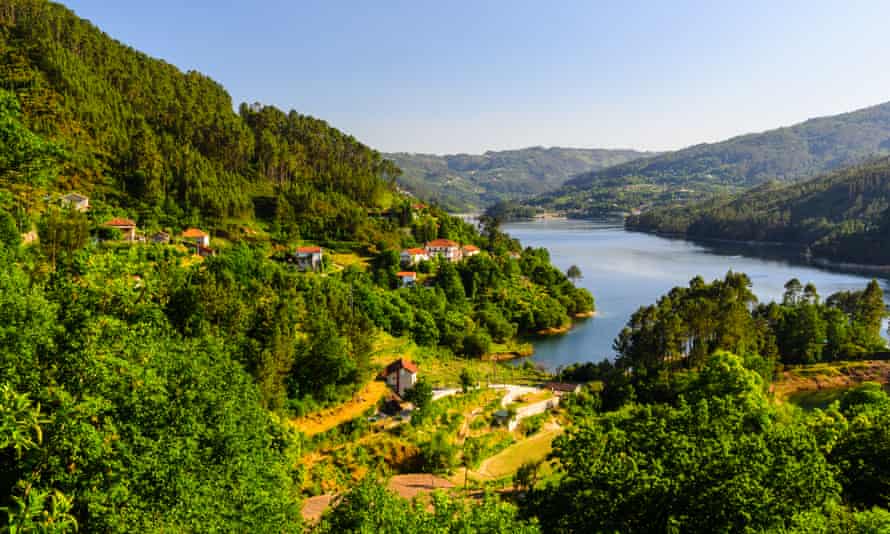 Inland from the northern city of Braga, towards the Spanish border, is the village of Cerca de Baixo, where visitors can stay at the gorgeous Pousada Mosteiro de Amares (doubles from £105 B&B). This former monastery was converted by the acclaimed Portuguese architect Souto de Moura in the mid-1960s. The hotel blends with the ruins of the monastery and has a great restaurant overlooking the valley of the Cavado river. From here, drive into the Peneda-Geres national park and enjoy the panoramic views from Miradouro Pedra Bela. A scenic 90-minute drive further is the ancient, isolated village of Pitoes das Junias. Surrounded by mountains, this is a place where the villagers still live above their animals in traditional stone cottages and the only disturbance is the occasional eagle overhead.
guidetothecity 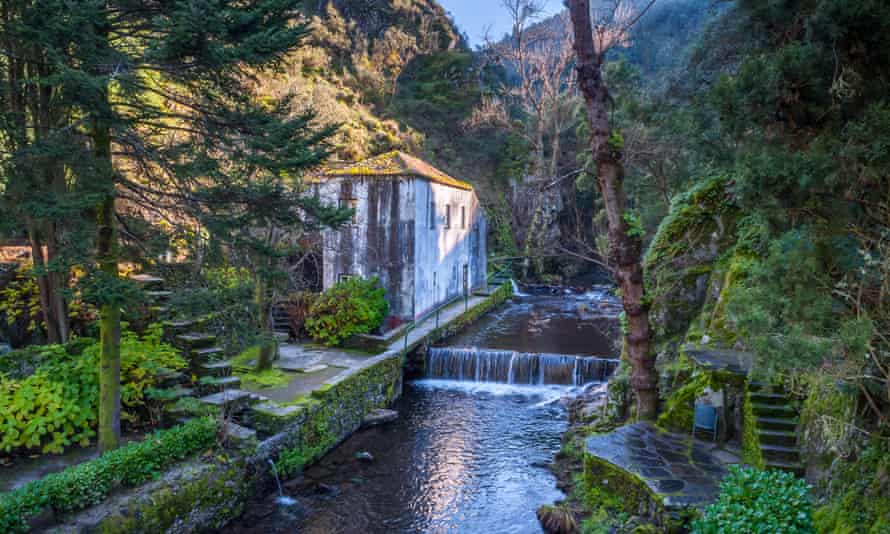 Near Lousã, in the Coimbra region, the aldeias do xisto (schist villages) stretch east, away from the coast toward the lush, mountainous interior. Talasnal, one of the first villages, is a 30-minute white-knuckle drive from Lousã. It’s a place frozen at the end of the 19th century, and abandoned by permanent residents – the remaining structures are used as holiday lets. When there, be sure to eat at the wonderful Ti’ Lena’s – the only restaurant in town, named after the last permanent resident of the village, where there are only two offerings on the menu on any given night – although the menu promises further dishes “available under consultation”. Stay in one of Talasnal Montanhas do Amor cottages (from €60pn, on Facebook) and enjoy breakfast overlooking the valley, ancient Lousã Castle, and one of the region’s many praias fluvial (river beaches) – all a short hike from the village. If enjoying a glass of wine – I love the local blueberry wine – on your veranda at night, keep an eye for the wild boar that wander by on their nocturnal meanderings.

Travellers’ balm in the east 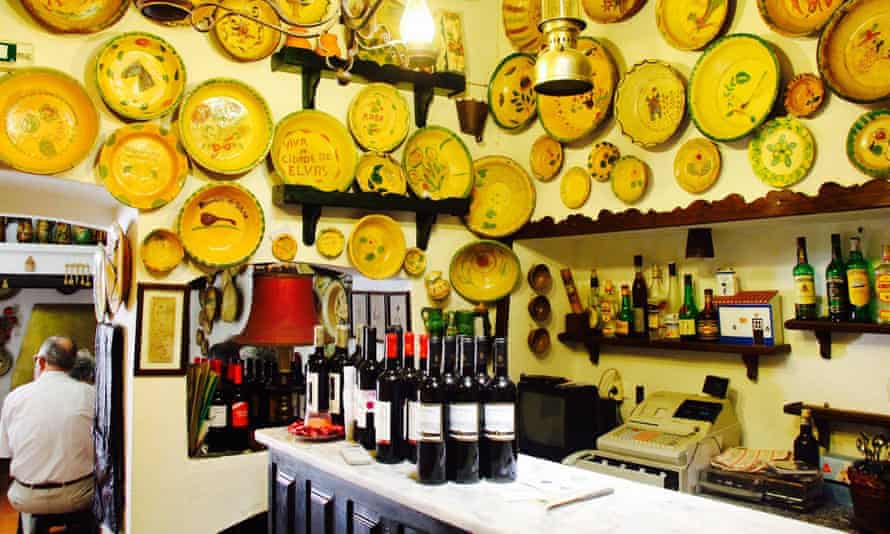 Right by the church in the quiet village of Vila Fernando, near Elvas, Taberna do Adro is a dainty tavern that is balm to the weary traveller and a boon to his stomach. We arrived late after a long journey from Madrid and were soon treated to a cornucopia of dishes illustrating the genius of Alentejo cooking: roasted peppers in olive oil, tiborna (similar to bruschetta), wild asparagus with scrambled eggs, runny and piquant sheep’s cheese, broad beans with chouriço and cured ham that melts on your tongue. Expect to pay a little bit more than in an average village restaurant – and to be happy to do so.
Largo João Deus 1, +351 268 661 194, on Facebook

Trails in the south-west 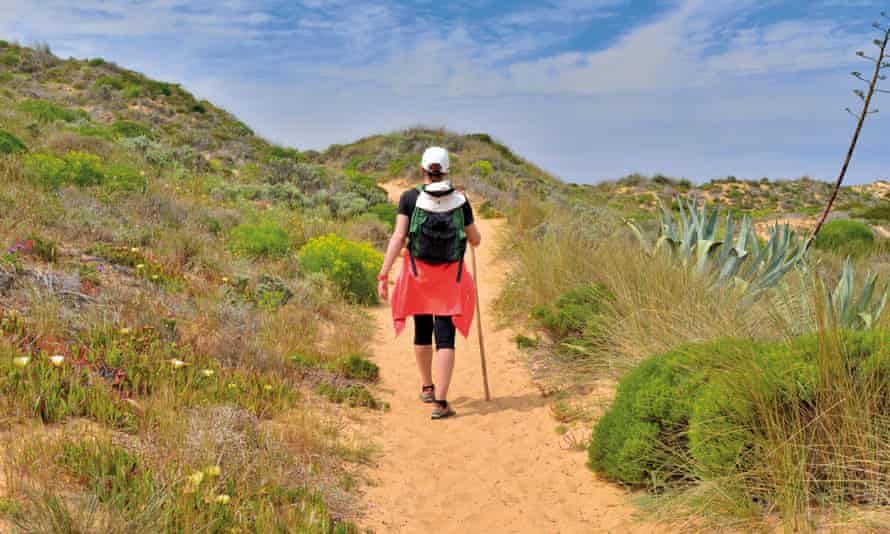 The Rota Vicentina is a spectacular network of paths and trails for walkers which pass through traditional villages with colourful houses, dense forests, merging onto the coast to sweeping views of crashing Atlantic waves and stunning sunsets. Try the Fisherman’s trail and stay at Casa da Seiceira near Brejao (doubles from €60 B&B, also apartments) where owner Marta will chat with you at dinner and offer her lovely fish soup and pack you a lunch full of homemade bread and smoked hams.
en.rotavicentina.com 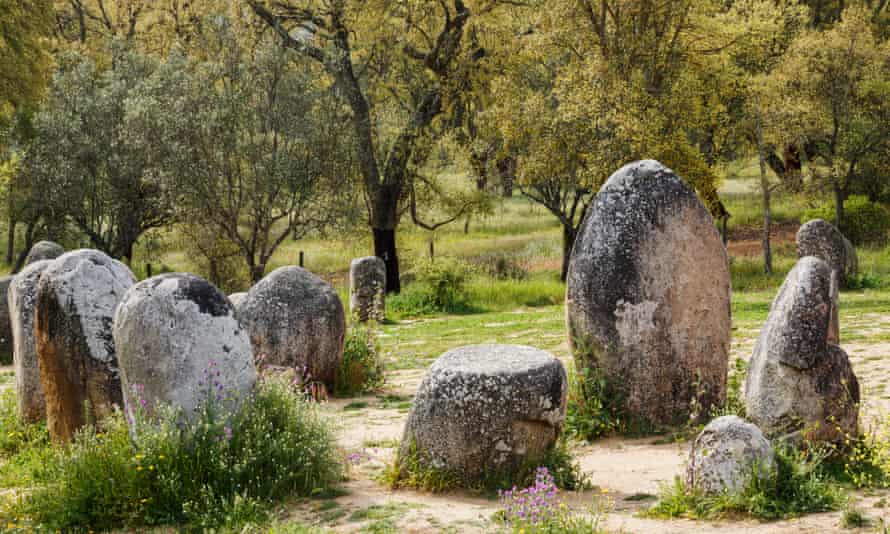 Early morning or late afternoon is the best time to visit Cromeleque dos Almendres in the Alentejo region, one of Europe’s largest megalithic stone sites. Entry is free, it’s a short walk from the parking lot to the site and it’s well-equipped with information boards. It’s also within 20 minutes’ drive of the Unesco world heritage city of Évora. Combine the two for a great day out. 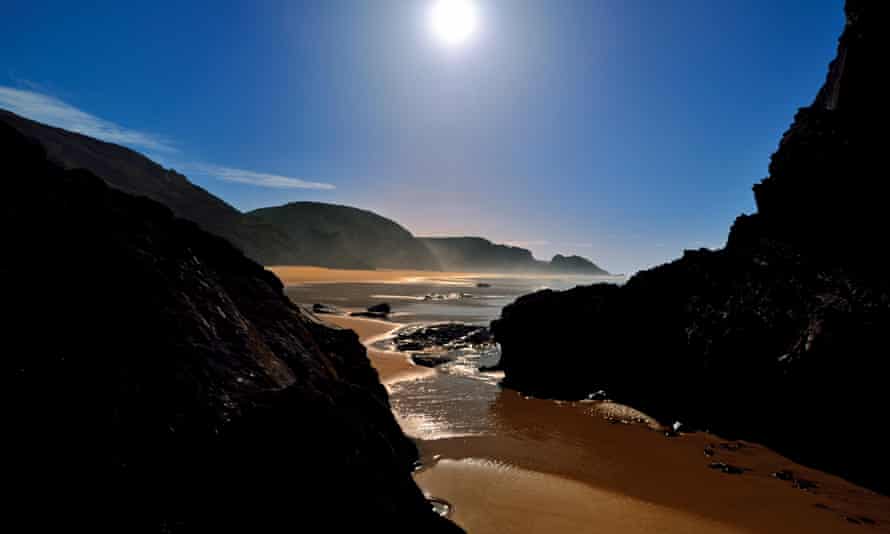 The Costa Alentejana is the coast that connects Lisbon to Algarve. If you drive down the coast, you can explore some of the most beautiful beaches anywhere. Many of the beaches can be accessed by car, but among those that can only be reached on foot is Amália’s beach – named after the great Fado singer Amália Rodrigues, who built a house above it. It’s a couple of miles south-west of Carvalhal village, and offers visitors a reasonable chance of having to themselves one of the finest places from which to see the sun set over the Atlantic.

Mountain biking on the Donkey trail 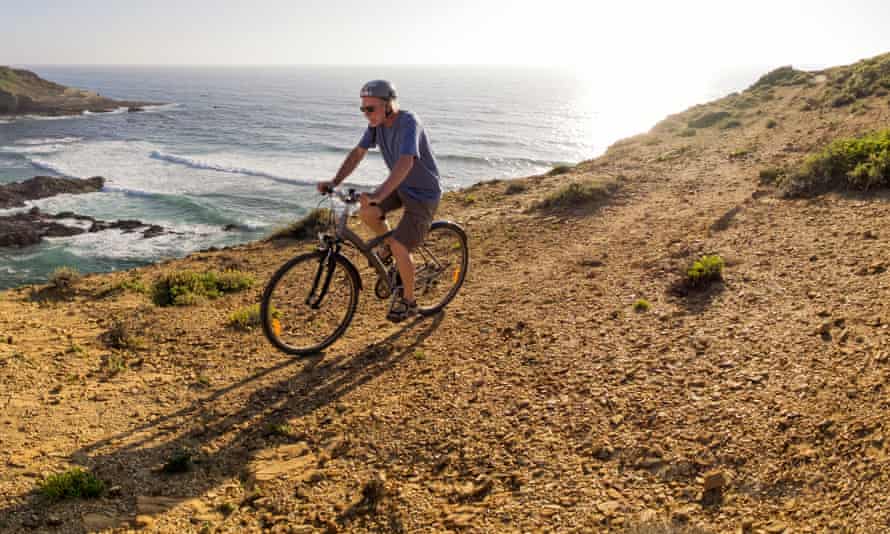 Don’t be fooled by the name, this is not a seaside donkey ride. The Trilho do Burros starts from the Santuario da Peninha chapel in the Sintra national park, west of Lisbon, and the trail drops to the ocean edge in the far distance below. The upper half combines huge panoramic views of the hills and ocean with technical rocky steep drops. After halfway the gradient levels off slightly, allowing you to get off the brakes and carry speed through the sweeping berms and flowing singletrack down to the ocean edge. You’ll be torn between wanting to take in the stunning views and the need to concentrate fully at the task in hand. This trail has it all. 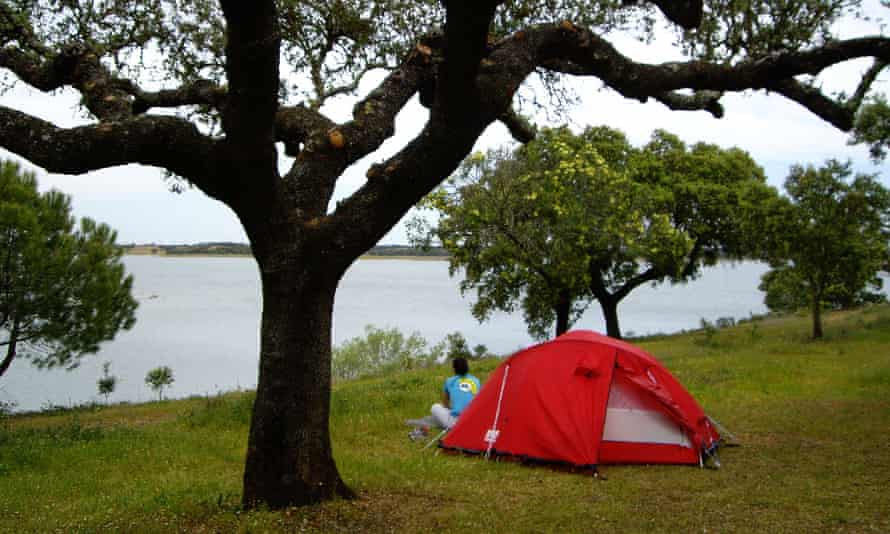 On a cycling tour in March, we stayed two nights at Markádia campsite on the Odivelas reservoir in the Beja district of Alentejo. The site is pristine with expansive views, plentiful pitch space, plus cabins for rent. Amenities include very friendly, English-speaking staff, an onsite restaurant and mini golf. It’s an easy day trip to the historic town of Évora through fields of olive and cork trees.
From €4.80 per person, and €4.80 per tent pitch, markadia.net

Famous Portuguese People: From Actors To Footballers And Explorers

11 Things Tourists Should Never Do In Portugal, Ever