The coastal resort town of Cascais lies near Cabo da Roca – the westernmost point in mainland Europe – and has been a popular tourist destination ever since the late 19th century when King Luís I chose Cascais for his summer residence.

The stretch of coastline that runs from Lisbon past Estoril to Cascais is home to some of the best beaches in Portugal, from pretty bays and dramatic coves to surf destinations and urban beaches. This is our pick of the most beautiful beaches in and around Cascais. 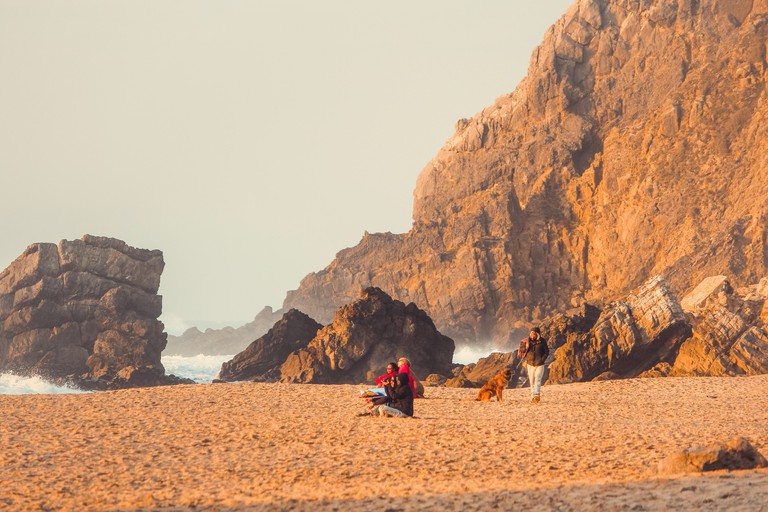 This North Atlantic beach near the town of Almoçageme on the western side of the Serra de Sintra is quite simply one of the most beautiful beaches in Portugal.

Nestled between dramatic cliff formations in the Sintra-Cascais National Park, it features a strip of golden sand and clear waters worthy of its Blue Flag status. It’s also just a 15-minute drive from Cabo da Roca, a wild and windswept cape that marks the westernmost point of mainland Europe. 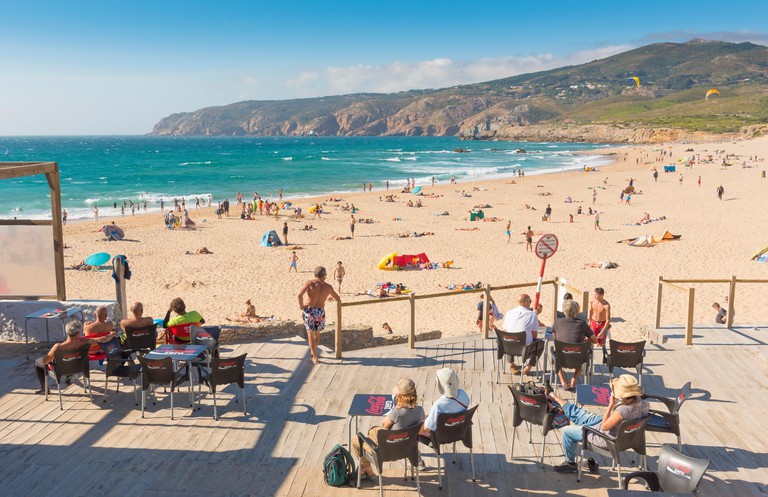 Planning a surf trip to Cascais or Lisbon? Unlike most beaches in and around Cascais, Praia do Guincho directly faces the Atlantic Ocean and the epic waves make it a popular surfing destination for experienced surfers.

The strong winds also make it popular for windsurfing and kitesurfing, but less suitable for sunbathing. Praia do Guincho is mainly accessible by car – it’s just a 20-minute drive to the beach from Cascais – or it’s possible to cycle along a purpose-built cycle path. 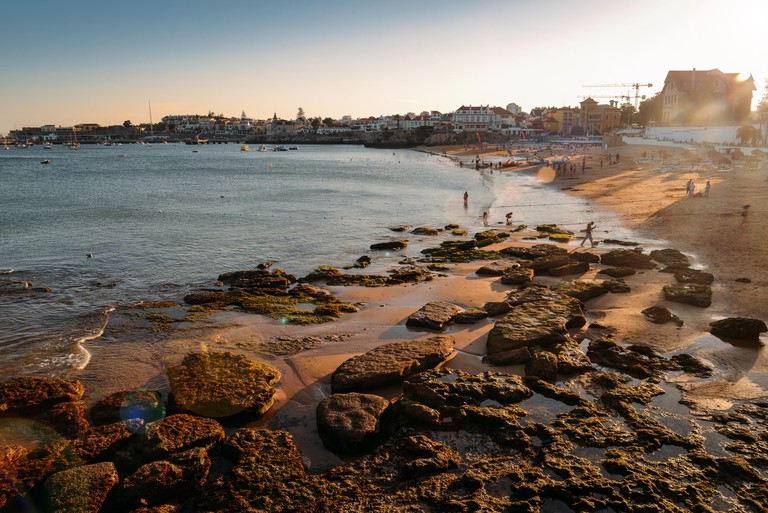 Praia da Conceição boasts some of the calmest waters on the coastline around Cascais and Lisbon, making it ideal for families with young children and for stand-up paddleboarding.

It’s one of the largest beaches in the region and at low tide is connected to the neighbouring Praia da Duquesa. Perched on a rocky outcrop at the west end of the beach you’ll find the renowned Albatroz hotel, which was originally built in 1873 as a Palace for the Dukes of Loulé. 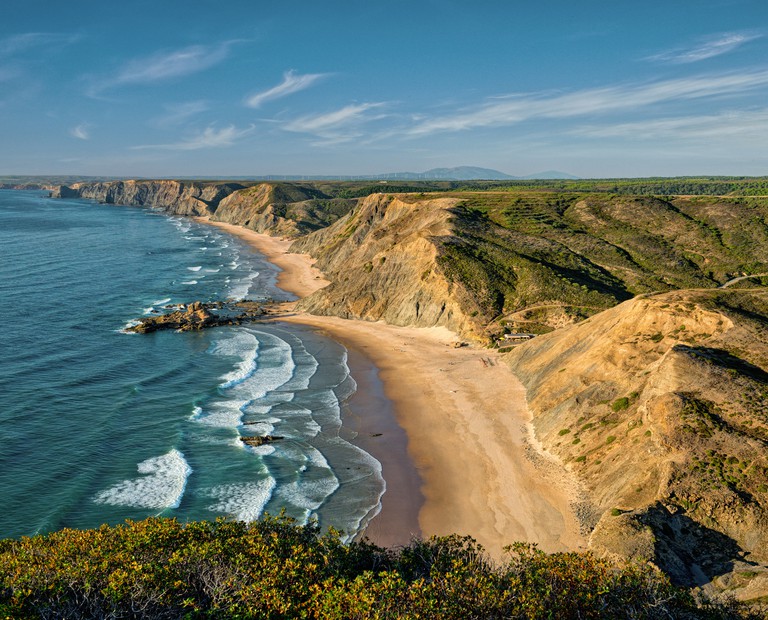 Add a dose of history to your beach day at Praia da Torre, a sheltered sandy beach overlooked by the Forte de São Julião da Barra. The impressive 16th-century fortress is one of Portugal’s largest maritime fortifications and is considered the most important in the country.

One of the defining features of the beach is Piscina Oceânica de Oeiras, an enormous ocean swimming pool with diving towers and a dedicated children’s pool that’s open between June and mid-September. 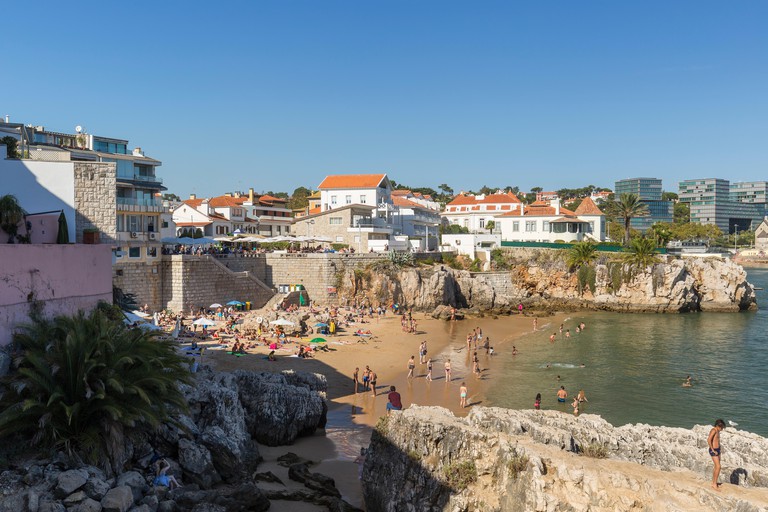 Looking for a beach in the heart of Cascais? This tiny, sandy cove sheltered by cliffs is located just a few minutes’ walk from the centre of Cascais and the train station.

The beach was once a favourite of Queen Amélia, the last queen of Portugal – hence the name, which translates as Queen’s Beach – and it’s one of the prettiest in the region. Its convenience and natural beauty mean it’s also one of the most popular beaches. It’s overlooked by the Largo da Praia da Rainha square, which offers a vibrant spot to grab a bite to eat. 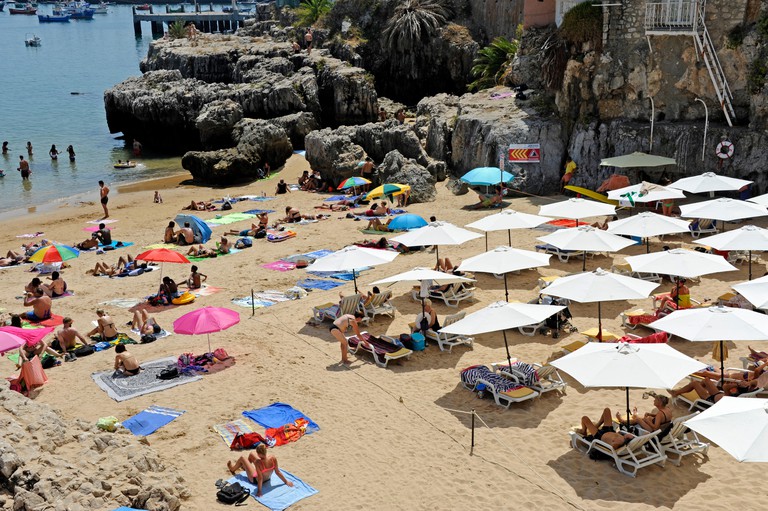 Back when Cascais was a fishing village, Praia da Ribeira – otherwise known as Praia do Pescador (Fisherman’s Beach) – was where colourful fishing boats were moored and unloaded.

Today, the fishing boats are moored in the marina and Praia da Ribeira is crowded with tourists. Its convenient location close to Cascais’ main square and the old town makes it a good choice if you just want to spend a few hours at the beach rather than making the longer trek by train to one of the larger beaches nearby. 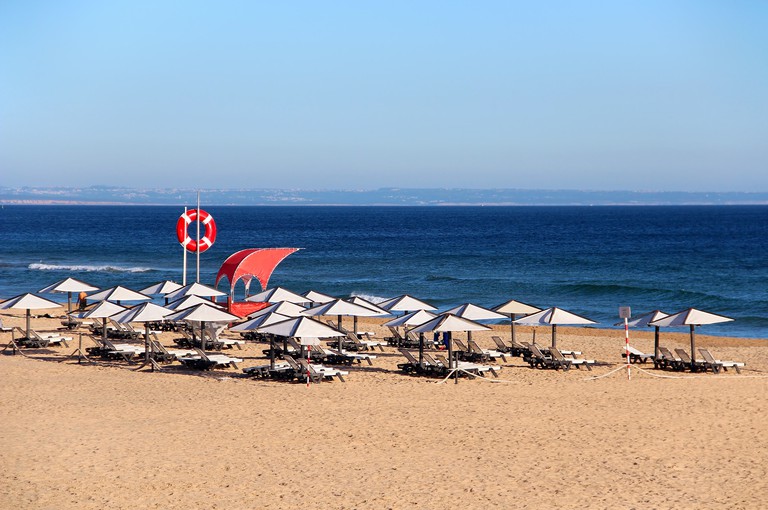 Aspiring surfers should make their way to Praia de Carcavelos, a sandy beach that boasts decent waves and a number of surf schools and rentals.

There are plenty of beach bars and cafes along the promenade – for fresh seafood, book a table at A Pastorinha, a renowned beachside restaurant that’s listed in the Michelin guide. The beach is also conveniently located for a day trip from Lisbon, as it’s on the Lisbon to Cascais train. 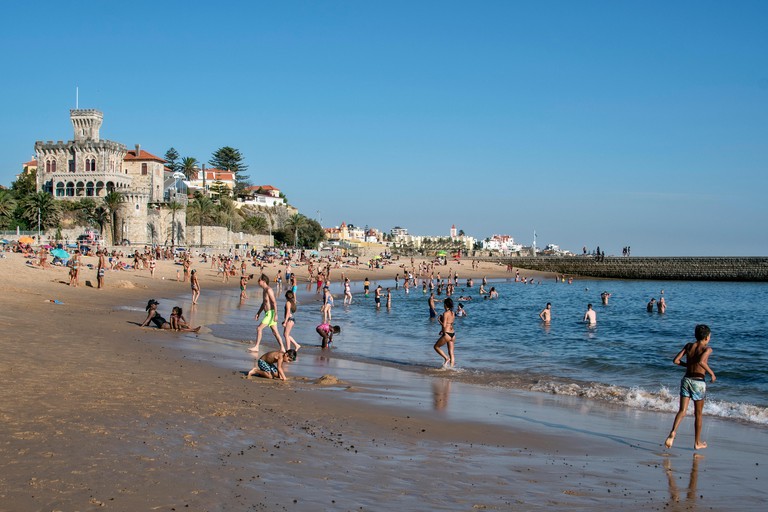 Conveniently located in front of the train station in the upmarket resort town of Estoril, which sits between Lisbon and Cascais, you’ll find Praia do Tamariz.

This small beach features rock pools to explore, beachside bars and cafes, whilst there’s also a promenade that’s popular for strolling and jogging. Elevate the beach experience at Reverse, a beachside bar that features an ocean water pool with an in-water cocktail bar. The eastern end of the beach is overlooked by a faux castle, which according to local lore is owned by the royal family of Monaco. 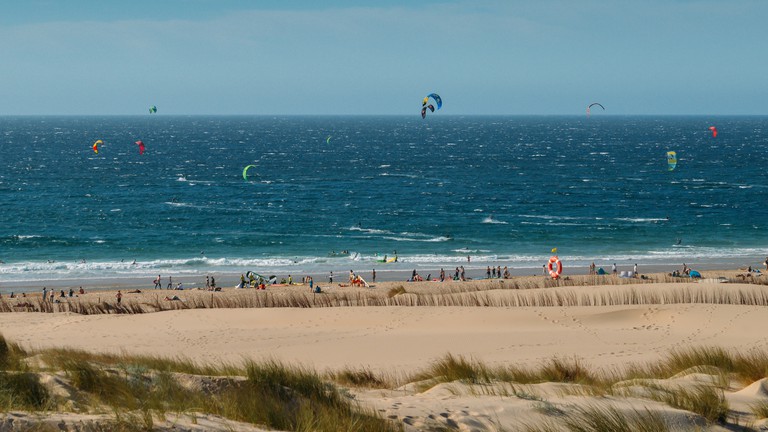 This secluded patch of sand near Cabo da Roca is the westernmost beach in mainland Europe – and, thanks to its remote location, it’s often almost completely deserted.

With cold waters, strong currents and no lifeguards, however, it’s not a swimming beach. Instead, the isolated location is known as an unofficial naturist beach for nude sunbathing. It’s also popular with photographers for its unspoiled wilderness and enormous rock formations that jut out of the Atlantic Ocean.

A Complete Guide To The Best Festivals in Portugal

8 Customs Only Residents of Lisbon Can Understand