Scotland is made up of many different landscapes – lochs, rivers, coastline and mountain ranges, including the famous Munros, as well as towns and cities that showcase art, architecture and tradition. But it’s spread across a lot of land, so travelling by train makes sense if you want to cover it all. We’ve rounded up six of the best. All aboard!

This line, which reopened in September 2015, having been been closed for more than 40 years, links Edinburgh Waverley with Tweedbank, and since its reopening has added seven new stations to the Scottish rail network.

This engineering feat makes it the longest railway to be constructed in the UK in a century, passing through forests, moorland and great swathes of emptiness.

Hop off at Eskbank to visit Rosslyn Chapel, or continue on to Tweedbank and visit Sir Walter Scott’s home, Abbotsford House. In spring 2021, the world’s longest tapestry, The Great Tapestry of Scotland, is due to be rehoused in a new visitor centre in Galashiels, the penultimate stop on the Borders Line.

If you’re not able to wangle a room at Sir Walter Scott’s home, we recommend a cosy stay at either the Townhouse Hotel or the Barn @ the Coach House, both a short walk away in the old town of Melrose. 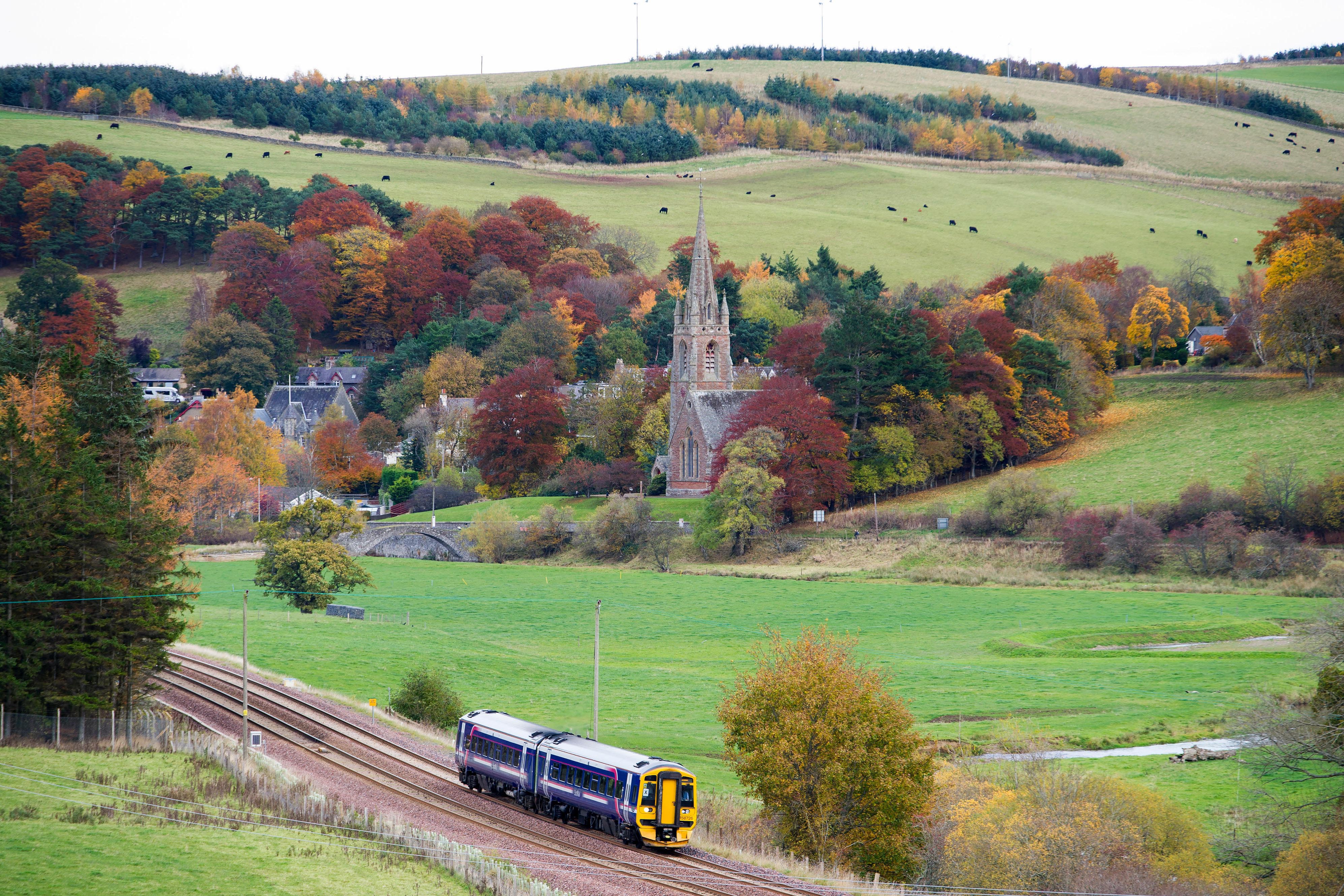 Head north from Waverley, and you soon come to the mighty Firth of Forth, with the Forth Rail Bridge, a Unesco World Heritage Site and extraordinary feat of engineering.

As the train continues, it leaves the sea behind and the rolling fields and woodlands begin to get steeper and more rugged. Beyond Perth, the train enters the Highlands, where, as the name suggests, the mountains start to appear.

You can expect to see deer, mountain hare, mountain steep gorges and thundering waterfalls, all from the comfort of your seat. The train climbs higher and higher and snow often clads the mountains.

Get off at Aviemore where you can jump aboard the Strathspey Steam Railway, or continue on to Inverness, the capital of the Highlands.

There’s no shortage of fantastic accommodation around Inverness. Take your pick from our curated lists: 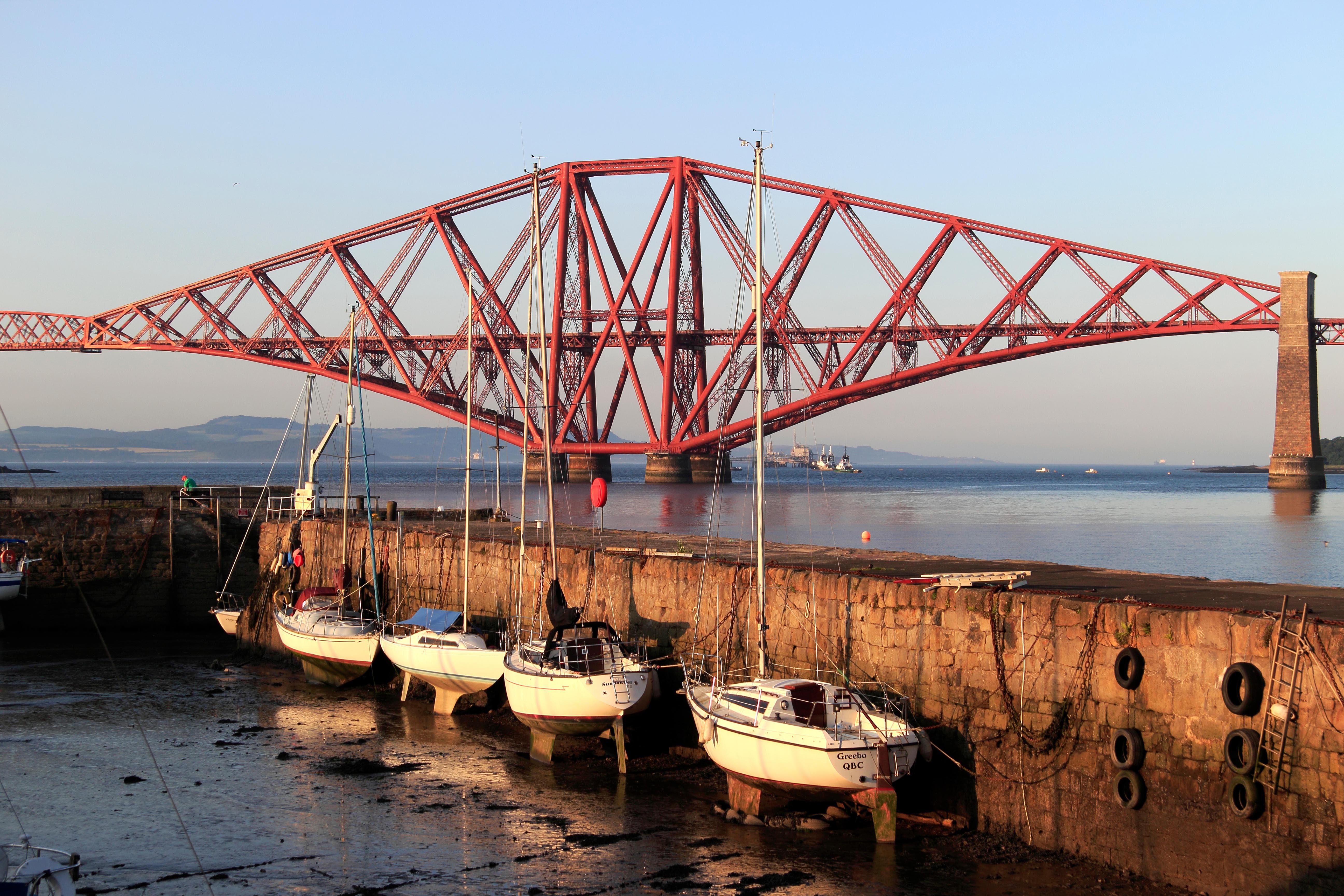 Closed to passengers in 1965, this route was reopened in 1978 by the Strathspey Railway Company and is definitely more about the journey than the destination.

Your comfortable carriage is hauled by a traditional steam engine through the Cairngorm mountains where you can catch glimpses of eagles and ospreys.

This might sound enough of a draw by itself, but the train also has excellent dining options and for the dedicated railway enthusiast, the chance to actually drive it, and fire the steam engine itself.

For an overnight stay in Aviemore, you can’t go wrong at Cairngorm Guest House – a Victorian-style B&B 10 minutes’ walk from the train station. It has 12 country-style rooms, some with fabulous mountain views, and offers free cooked breakfast served in either the cosy dining room or the conservatory, with vegetarian options available. 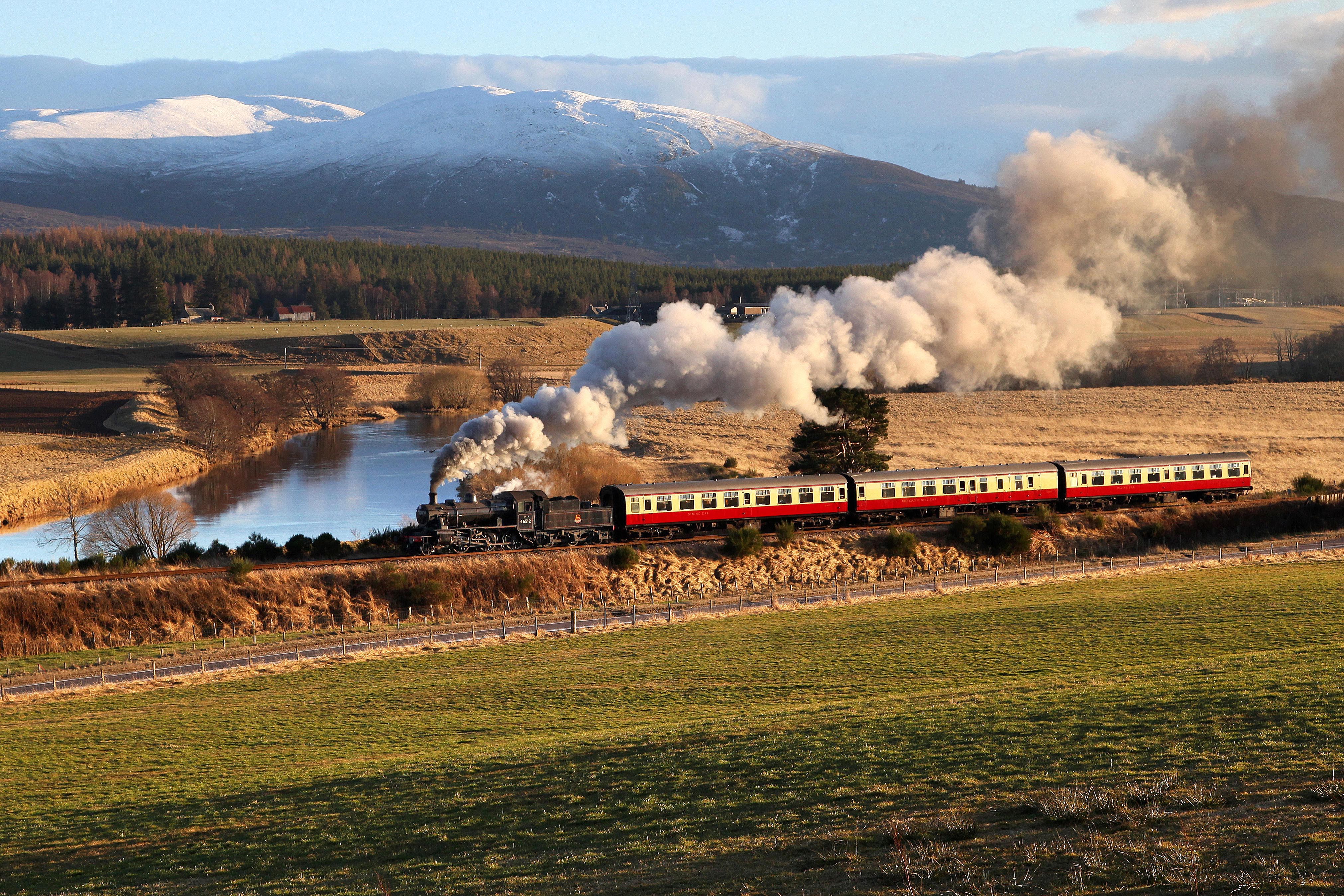 Winding its way through mountains and lochs, past beaches and wildlife, the Kyle Line leaves Inverness towards some stunning scenery. This is one of the best places to spot the golden eagle, or the even larger white-tailed sea eagle, aka the flying barn door.

Deer abound, and other treats include otter spotting – from the comfort of your seat. Disembark at Kyle of Lochalsh, on the west coast, and you are at the gateway to the Isle of Skye and the islands to the west.

If you’re spending the night in Kyle of Lochalsh, we recommend a stay at the Kyle Hotel, where you’ll find unfussy rooms with a Scottish touch, plus a cosy pub and restaurant. And if you’re headed to Skye, choose from our definitive list across the island – from seaside B&Bs to luxury glamping pods. 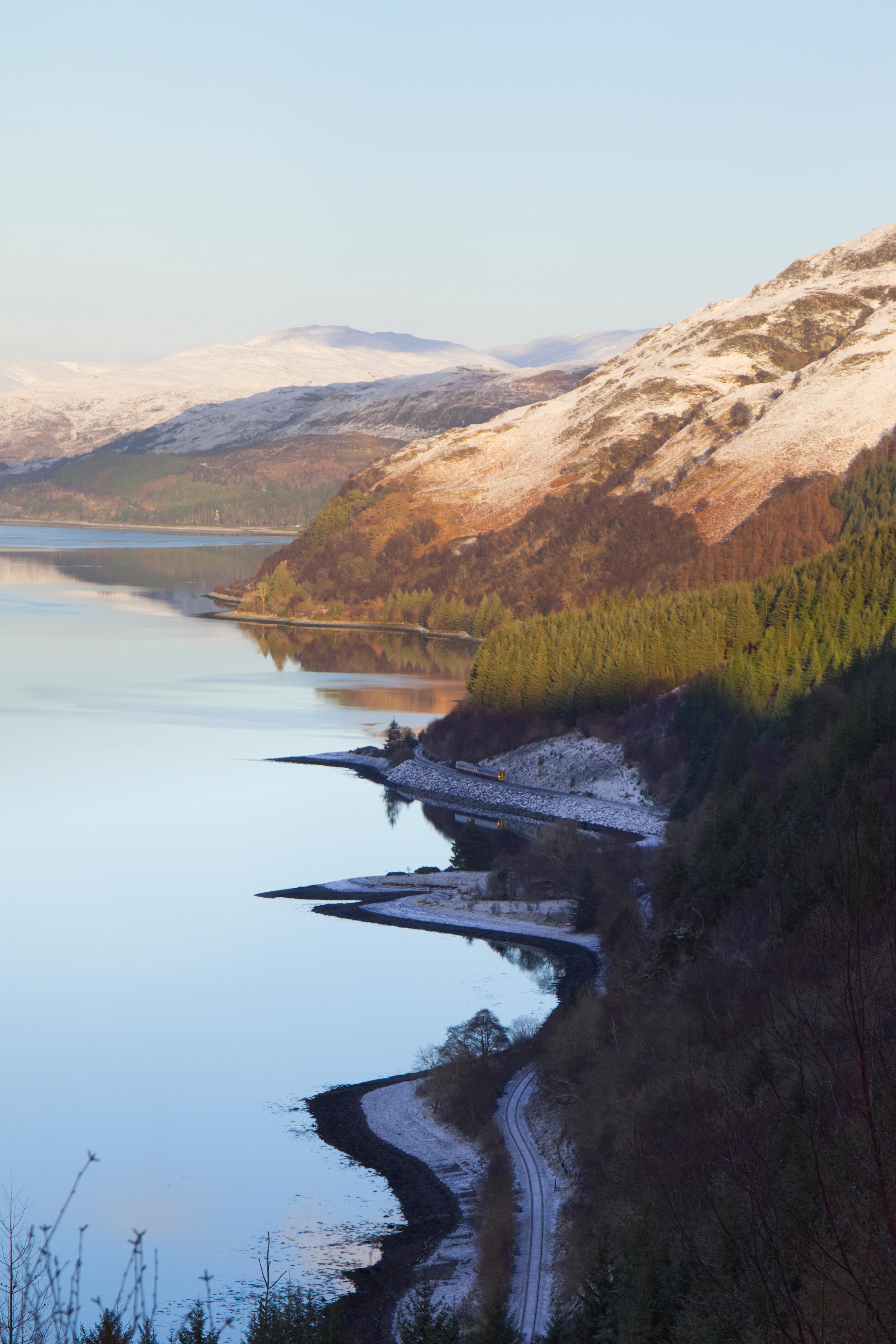 On the Kyle of Lochalsh line, your journey takes you along the banks of Loch Carron | © markferguson2 / Alamy Stock Photo

Like the Kyle line, this route heads north out of Inverness and weaves in and out of mountains and lochs to the top of Scotland and the towns of Thurso and Wick. It is a long journey, as the terrain means the track has to curve and twist, so you’re train is often doubling back on itself.

There are picturesque towns on the route, along with request stops – often little more than a platform in the middle of rugged, empty country.

Highlights en route include seals and dolphins in the North Sea, wild glens full of nature, and the extraordinary expanse of blanket bog that is the Flow Country. If you get off at Dunrobin Castle you gain a discount on entry if you show your ticket.

Leave the train at Thurso to catch the ferry to the Orkney Islands – and choose your accommodation from our pick of the best places to stay. Or head on to Wick and catch a bus to John O’Groats.

Accommodation options here are limited, but there are some lovely, warm and welcoming B&Bs in Wick – try Bank Guest House or the Clachan. 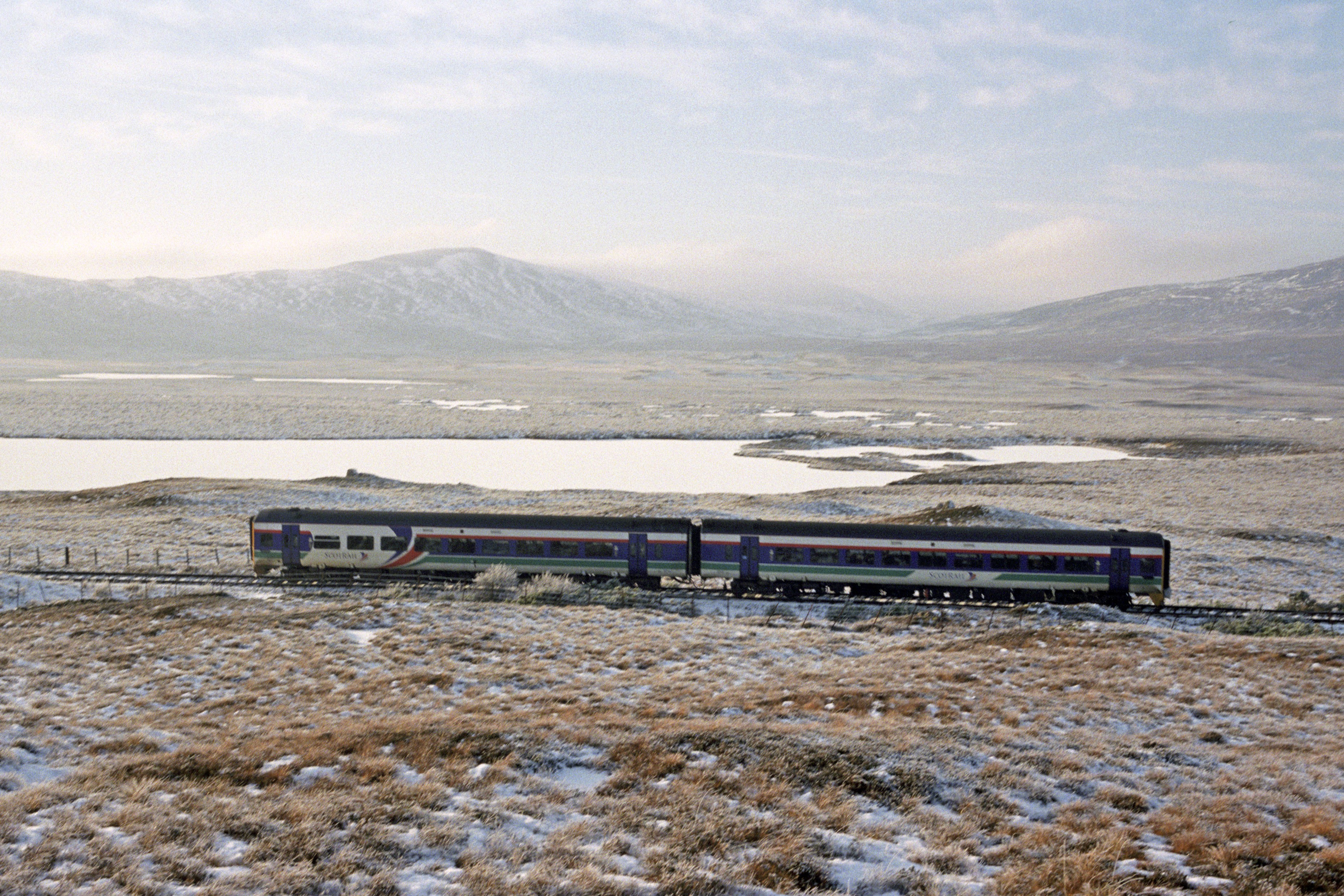 Voted as the best railway journey, not just in Scotland or the UK but the world, the West Highland Line stretches from Glasgow to Mallaig on the west coast.

The stupendous scenery includes the vast Rannoch Moor, some of the highest peaks in the UK, and the silver beaches of Morar. Expect children, and adults too, to excitedly exclaim, ‘this is Harry Potter bridge!’

The famous Hogwart’s Express, having left Platform 9 3/4, appeared on parts of this route in several of the films, and the ‘bridge’ is the Glenfinnan Viaduct, which gives the traveller stunning views of Loch Shiel and the Highlander’s memorial. One of the last stops on the route, with enchanting views out to the islands of Muck, Eigg and Rum, Arisaig is the furthest west station on the UK mainland.

In summer the journey between Fort William and Mallaig can be made even more romantic by travelling on the train pulled by the steam engine, The Jacobite.

For a place to stay in Mallaig, take a sea-facing room at the equally charming West Highland Hotel or The Chlachain Inn for tasty pub grub and beautiful views across the harbour. 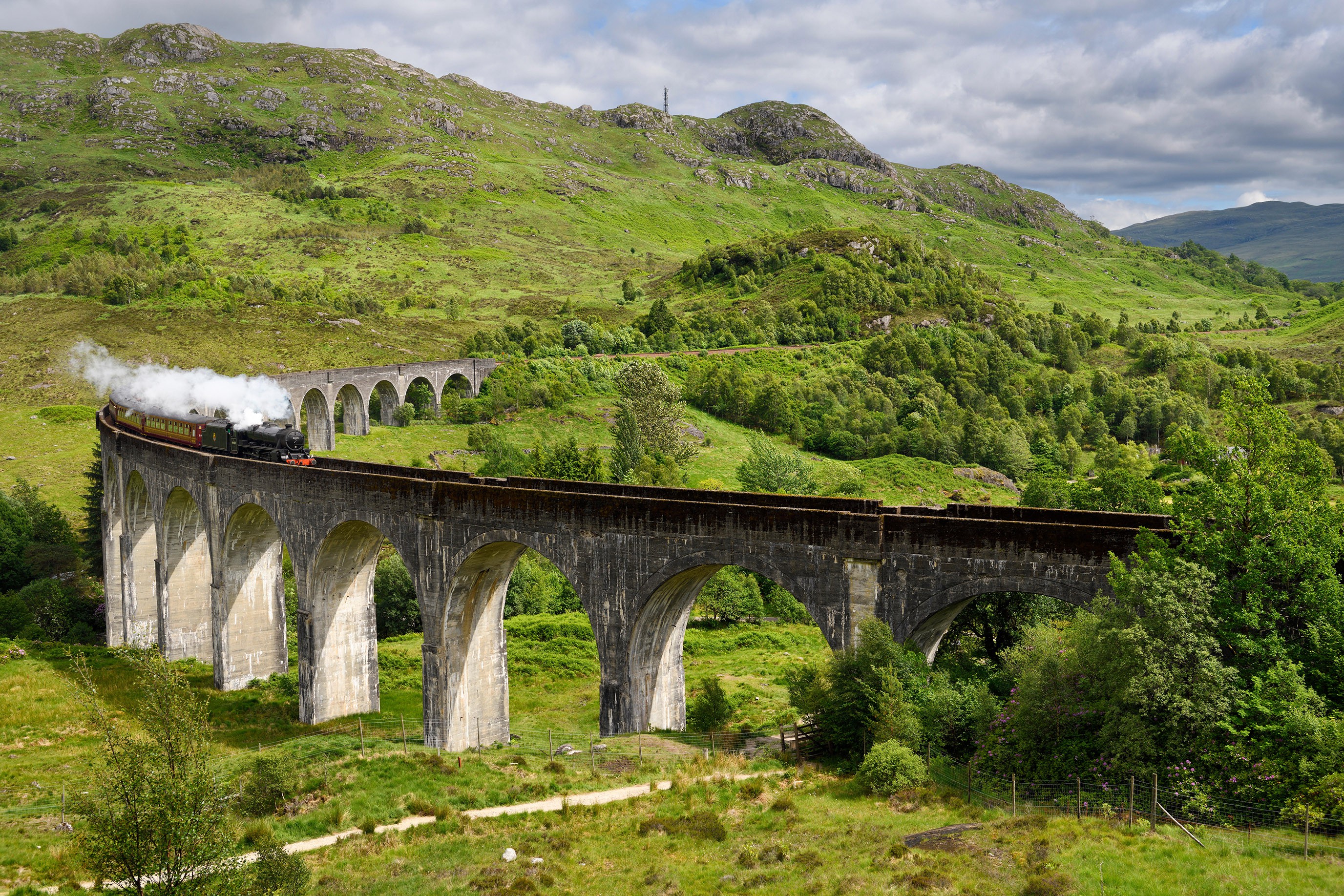 Exactly why the Unicorn Is Scotland’s National Animal?

A Nature Lover’s Guide to Scotland