Influenced by Mediterranean cuisine, Portuguese fare heavily relies on seafood. From crispy whole sardines to dried and salted cod, these are the dishes to try in Lisbon and beyond.

Known for its wealth of seafood, spices and olive oil, Portuguese cuisine relies heavily on the Atlantic Ocean and the produce grown throughout the country. A journey through Portugal will bring you the likes of whole octopus slathered in olive oil, soups bobbing with beans and meat and francesinha sandwiches, puffed up with coin-size chorizo rounds. In Lisbon, the Portuguese capital, the cobblestone streets overflow with corner shops hawking bacalhau swimming in olive oil and bite-size egg custards gently dusted with powdered sugar. Here are the most beloved and famed dishes and desserts you need to eat on any trip to Portugal.

Originating in Algarve, cataplana de marisco is a seafood feast. The dish gets its name from the copper pan it’s cooked in – a cataplana, a pan with two rounded sides connected by a hinge that opens and closes like a clam – where onions, garlic and tomatoes are stewed with glugs of white wine, clams, whole prawns and coins of chorizo.

A platter of freshly grilled sardines (sardinhas assadas) is typical comfort food in Portugal. Often found as a main attraction at summer festivals across the country, the sardines are roasted whole on an open-fire grill and simply seasoned with a sprinkling of coarse sea salt. Once smoky and charred, the small fish are removed from the fire and served as they are – bones and heads intact. Do as the Portuguese do and eat them whole: hold the head in one hand and the tail in the other, and – avoiding the bones of the spine – bite into the fish from the side. It’s crispy on the outside, revealing wonderfully flaky white meat on the inside. Lisbon in particular celebrates sardines at the Feast of St Anthony – also known as ‘the Sardine Festival’ – an annual event where cooks sell whole, charred sardines tucked into springy buns. 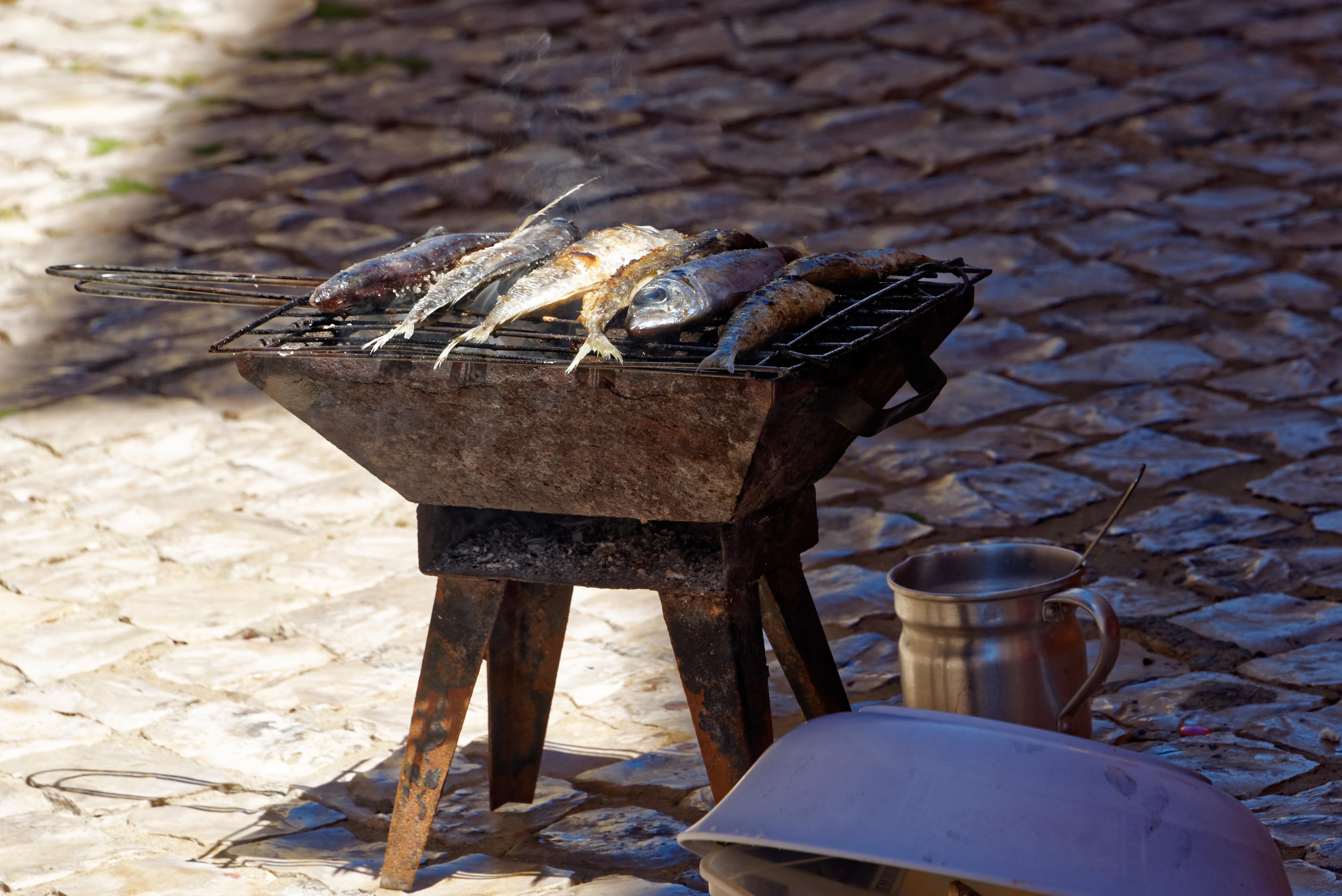 Grilled sardines are eaten at the Feast of St Anthony

Cozido à portuguesa – sometimes referred to as a Portuguese boiled dinner – is a traditional stew. Although the ingredients often change, depending on which part of Portugal it’s prepared in, it’s essentially a platter of slowly boiled meats, sausages and vegetables. In northeast Portugal, cozido overflows with farinheira (breaded sausage), morcela (blood sausage) and alheira (sausage filled with a mixture of game and bread), while in the south, cozido can be found with chicken, lamb, potato and mint.

Tamboril is Portuguese for monkfish, and while it’s not as popular as bacalhau (cod), it’s just as ubiquitous in the country’s cuisine. You’ll find chunks of flaky white fish stirred into a tomato stew peppered with garlic, laurel and rice, which soaks up the excess moisture. It’s similar to risotto and most often found in coastal towns around the country.

A typical peasant food from Alentejo, açorda is crafted out of day-old bread and mashed with garlic, bits of coriander, olive oil, vinegar and poached eggs. The Alentejo is Portugal’s largest region, an area brimming with fields, farms and vineyards. Here, locals are mainly farm labourers, who would make açorda because of its cheap ingredients that could be customised with anything else they had on hand: the wealthier the family, the richer the açorda. Along the coast, shrimp and other seafood can be added to the dish, while inland, cooks are more likely to throw in hunks of wild game. 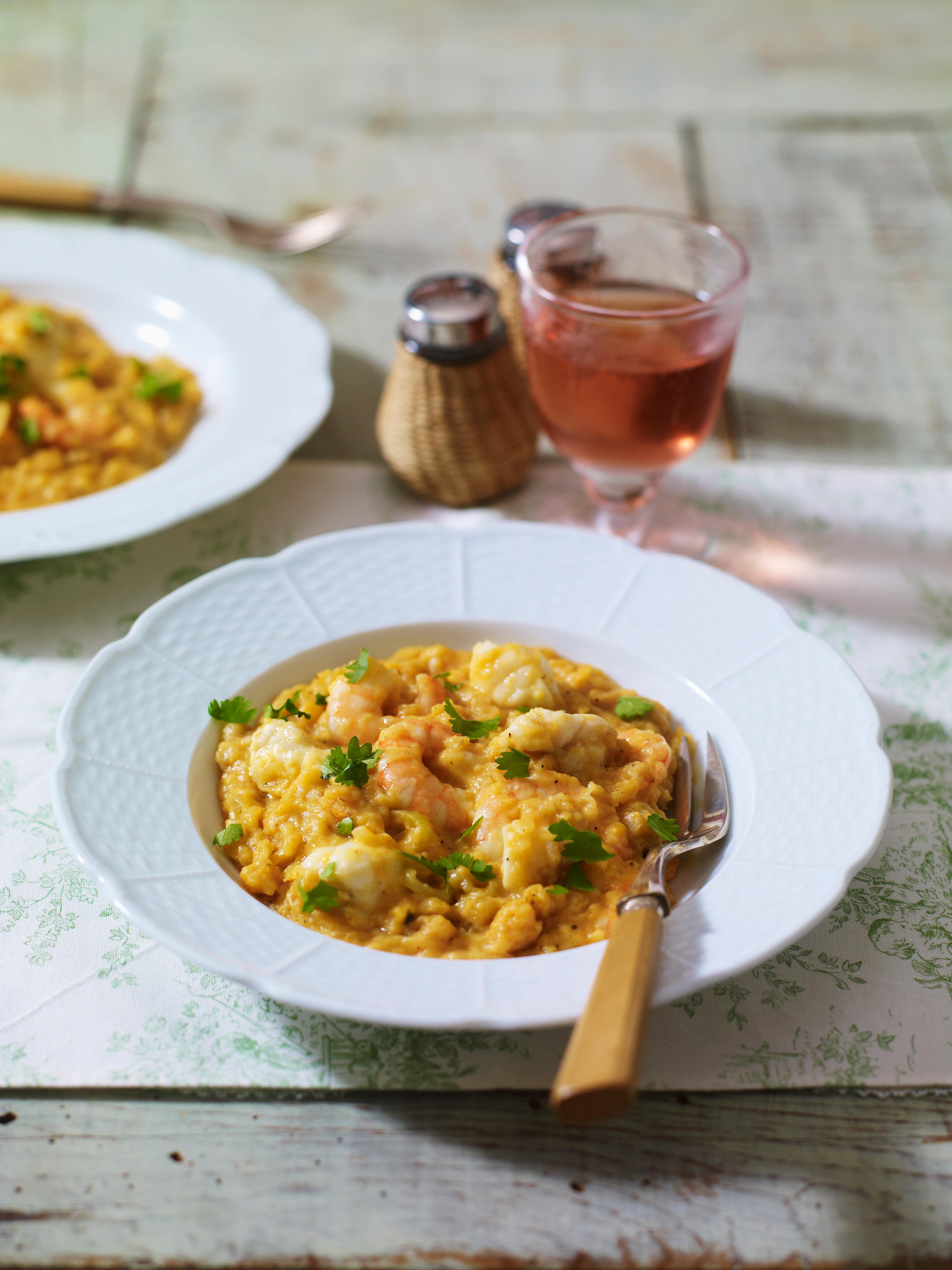 Although Portuguese cuisine is heavy on meat and seafood, peixinhos da horta is a mainstay vegetarian recipe. Literally meaning ‘little fish from the garden’, peixinhos da horta are just that: vegetables yanked from the ground, breaded and fried until crispy and golden brown, resulting in a finished product that resembles small, colourful fish. The traditional vegetable is green beans, but squash and peppers are also subbed in on occasion. The Portuguese have made this dish for centuries, and even introduced it to the Japanese when Jesuit missionaries landed on the banks of Japan in the 16th century; this style of frying eventually morphed into the now-beloved tempura.

Hailing from Alentejo, this bright green soup gets its colour from coriander, and is a verdant broth studded with garlic, pieces of dogfish shark, lemon, bay leaves, paprika and vinegar. The soup is commonly paired with broa, a Portuguese bread milled from cornflour.

Feijoada – derived from the Portuguese word feijão for beans – is a bean stew tossed with beef and pork. It makes sense that this soul-soothing comfort food is served during Portugal’s cool and rainy winters. In the rural region of Trás-os-Montes, this means a colourful stew of red and white beans studded with hunks of pork (sometimes including the ears and snout), sausages and lightly fried vegetables and spiced with cumin, cloves, garlic and paprika. Some versions cooked near the water substitute meat with whelk (sea snails).

Black Iberian pigs, raised on a diet of acorns, are a common domestic pig endemic to the central and southern regions of Portugal and Spain. These free-range pigs, called porco preto in Portuguese, are found as the star of a number of dishes, including pata negra ham (paper-thin slices of cured, smokey ham), and plumas de porco preto (pork cutlets, usually served with a salad and fries). 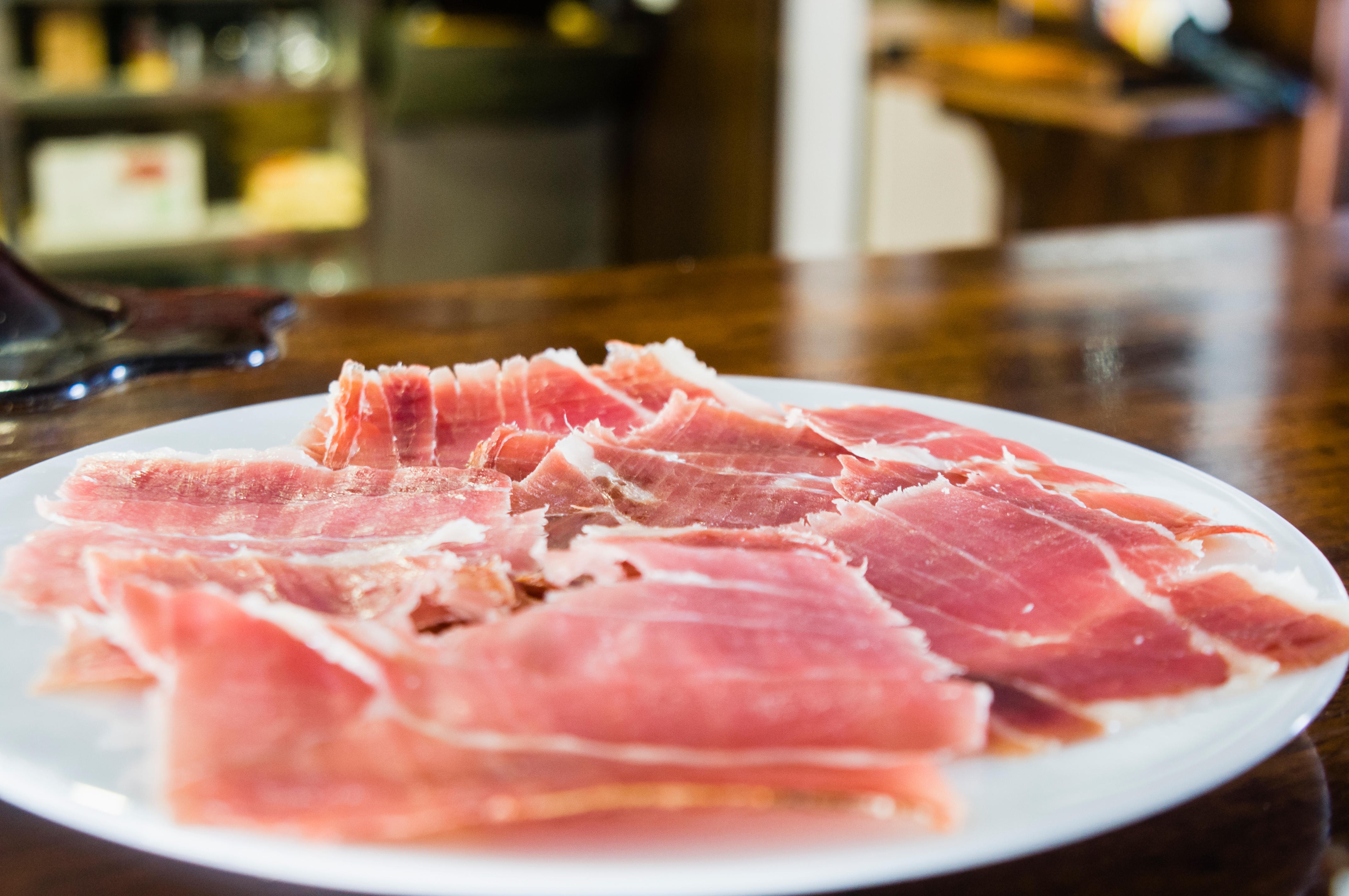 Sopa da pedra – ‘stone soup’ – comes piping hot with its own legend. According to Portuguese folklore, a homeless monk had nothing to eat, so rather than go hungry, he cleaned a stone and boiled it in water. As villagers passed him by, they each felt sorry for him and added something to brighten his meal: a few potatoes, some hunks of meat, a bag of beans. The soup slowly morphed from a poor man’s stew into a veritable feast. Once it finished cooking, the monk removed the stone and invited the villagers to join him for a meal. The story is still told today and has a distinct moral – the importance of sharing – and the soup, as in the story, can be prepared with a myriad of ingredients and shared among friends.

Alheira is a kind of sausage mixed with bread and meat – typically made without pork, which several centuries ago was uncommon. This was because when Jewish people were expelled from Portugal in the 15th century, those who chose to remain had to convert to Christianity. But many converted without actually changing their beliefs and their diets remained the same, which meant avoiding pork. In order to convince other people they had converted, people would hang non-kosher-looking sausages in their houses – sausages that masqueraded as pork products, but were actually made from a mix of cow, game and bread. Nowadays, alheiras are roasted or grilled and flanked by a mound of French fries and a fried egg.

In just about every Portuguese restaurant, travellers can find bacalhau (dried and salted cod). The traditional dish comes with its own nickname – ‘the faithful friend’ – and the Portuguese are quick to remind you there are more ways to prepare bacalhau than there are days of the year. You can find it as bacalhau à brás, a mound of tiny fried potatoes, cod, onions and scrambled eggs; or you can tuck into bacalhau com todos, a plate of boiled cod and vegetables and sliced hard-boiled eggs. 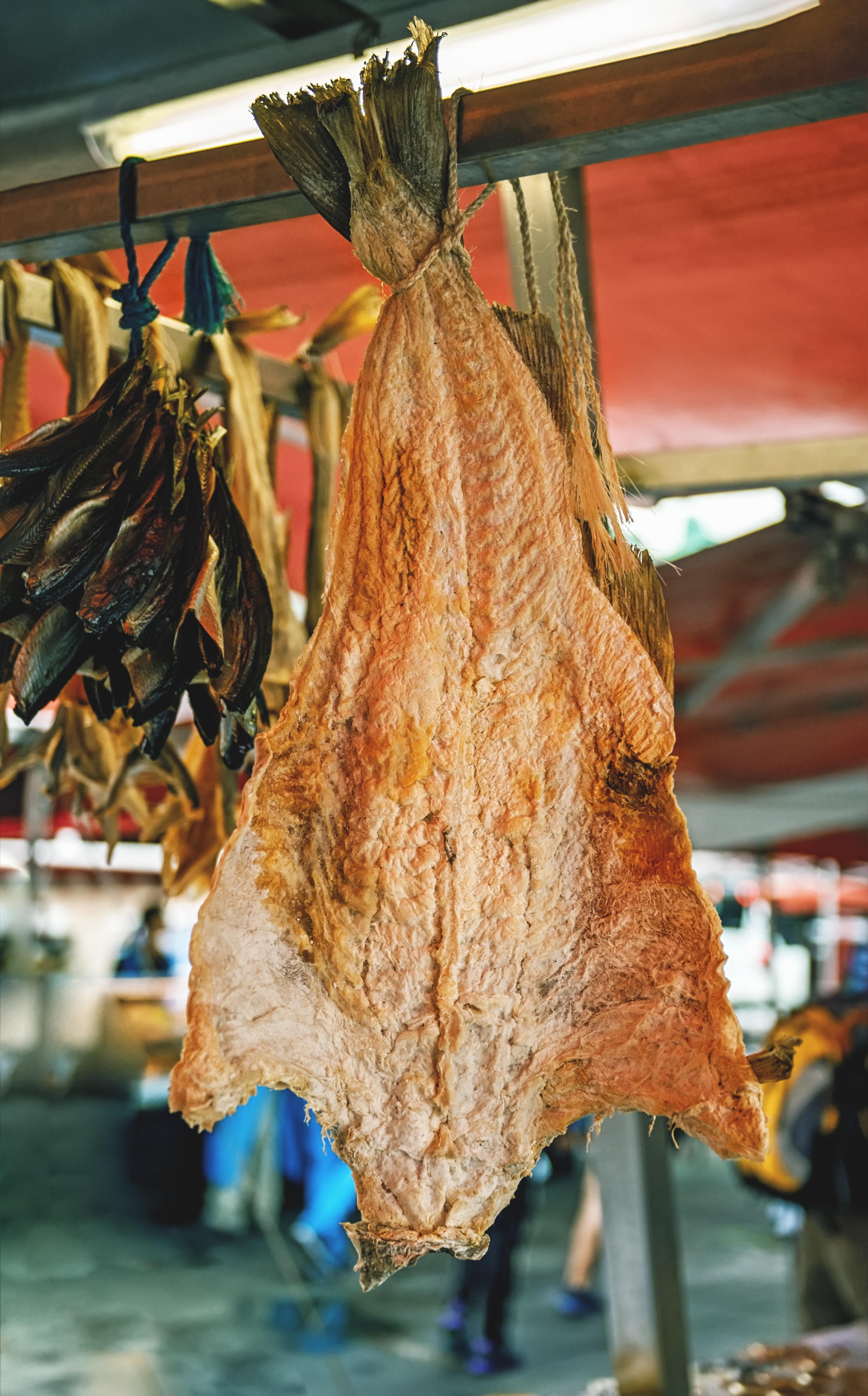 Bacalhau is known as ‘the faithful friend’

The coastal town of Aveiro is famed for fishing eel. Chefs here are known to whip up caldeirada de enguias, an eel stew brightened with saffron and ribbons of bell pepper, onions and potatoes. It’s most often accompanied by a glass of crisp white wine to bring out the flavours of the eel and vegetables.

The signature sandwich of Porto, francesinha is built out of two thick slices of bread crammed with meat (usually steak, ham, sausage or chorizo), slathered with melted cheese and a spicy tomato sauce and occasionally crowned with a gooey fried egg. The sandwich is quite similar to the French croque-monsieur; it was introduced to the Portuguese by Daniel da Silva, who returned to the country from France and attempted to change the French sandwich to something the Portuguese palette would prefer. Like a croque-monsieur, a francesinha is usually accompanied by a mountain of fries.

Perhaps Portugal’s most adored pastry, the pastéis de nata is a pint-size egg custard tart. Puff pastry is jammed with a yellow custard whisked with egg yolks, sugar, cream and a dash of lemon zest and baked until golden. At Pastéis de Belém, a bakery that’s been in operation since 1837 in Lisbon, lines curl out of the bakery with visitors waiting for one thing: the famed pastéis de nata. Guests can shower each pastry with their choice of powdered sugar or cinnamon; they are eaten for breakfast, as a snack or a dessert. 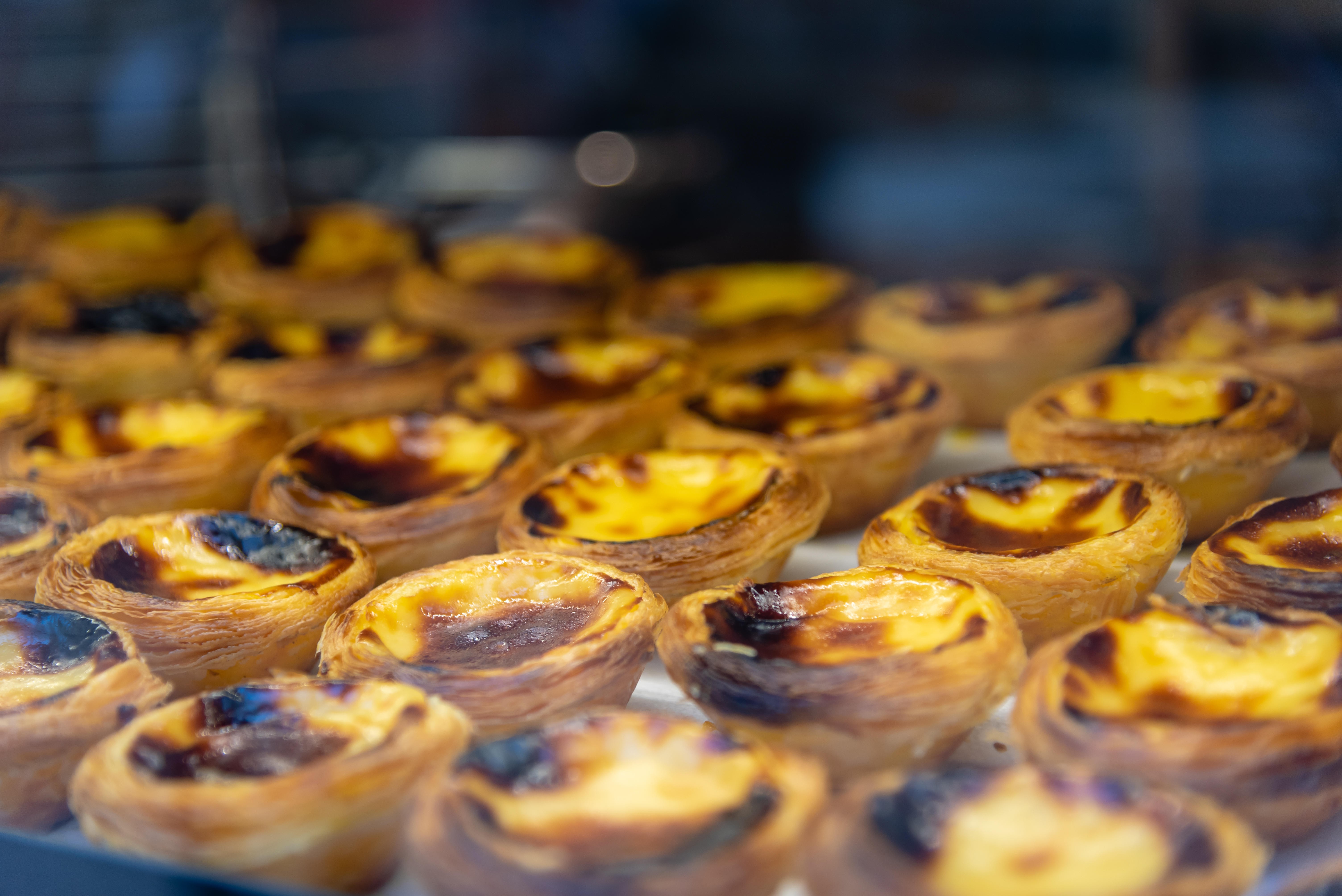 The pastéis de nata is a pint-size egg custard tart

A whole octopus is boiled and then roasted in the oven to make this dish. Its tentacles are slick with garlic and olive oil, and crispy from its time spent in the oven. It arrives with potatoes – sometimes simply split and baked, other times smashed with garlic – and a flurry of chopped coriander.

Posta mirandesa is Portugal’s answer to the French chateaubriand steak and Italy’s fiorentina steak. This Portuguese meat arrives from free-range Mirandesa calves, sourced directly from Trás-os-Montes, the only region where the breed is found. The thick tenderloin is grilled over a fire, and flanked by sliced potatoes and sautéed greens.

14 Most Charming Smalls Town in Portugal