This article is for those who want to know about the best things to do in Kinderdijk Netherlands. Whether you’re on a day trip from Amsterdam or a cruise ship excursion, the experience is pretty much the same.

We hope it helps you decide what to do in Kinderdijk yourself. Visiting tips are also included, so read on!

One final day on this Grand European Tour and it all ends tomorrow morning when our cruise ship docks in Amsterdam. Call the country what you will, Netherlands, Nederlands, or Holland, this morning we found ourselves in the country best known for tulips, windmills and Dutch cheese. 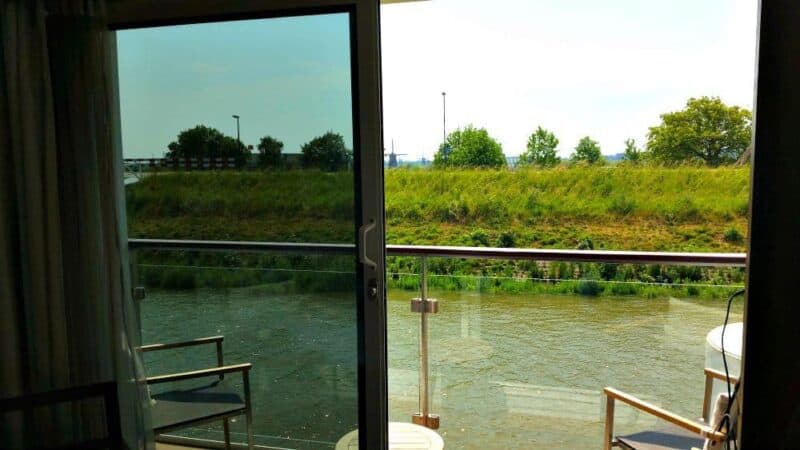 How’s this for a morning view?

Discovering the best things to do in Kinderdijk

We’d be spending the day in Kinderdijk today. This is a picturesque community with 19 historic, working windmills.

This begs the obvious question, why are these particular windmills so exceptional? After all, these ingenious machines have been around since the Middle Ages and they can be found in every corner of the country. Considering that over one quarter of the country lies below sea level, for all intents and purposes Holland wouldn’t be on the map without them. Saying “you can see them everywhere” is not overstating it.

A number of river cruise itineraries include Kinderdijk, so for those repeat passengers (like us) who had already toured the site, Viking thoughtfully offered an alternative: touring a cheese farm to see how Dutch cheese is made.

But wait. I digress. We had one last morning aboard.

Our morning began with the typical expansive breakfast buffet, this time with Dutch pastries, breads, and other specialties. We joined the others, lingering over coffee while we watched the scenery along the Rhine. The scenery’s flavor had definitely changed, from German to Dutch. 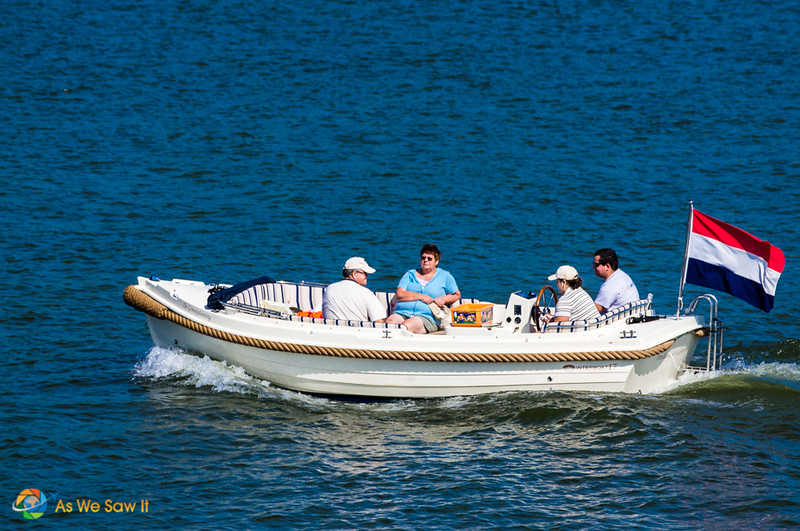 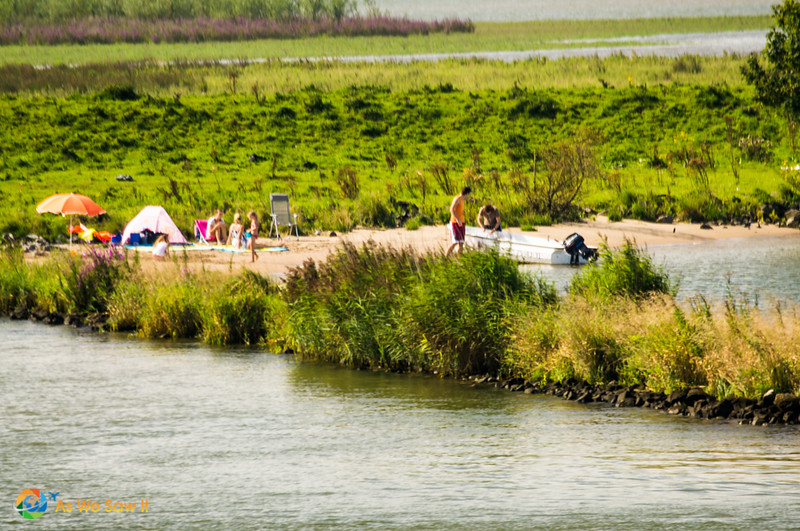 Our Program Director Dewi was scheduled to give a presentation on Dutch water management at 10:30. Just enough time to pack.

Trust me: It pays to travel light. With only one carry-on for clothing each, and one small backpack for electronics, it didn’t take long to pack everything up. Aside from a few toiletries, a change of clothes for tomorrow, and our electronics and charging cords, we finished long before her talk began.

Dewi’s talk was actually really interesting. She explained more about the expansive system of dams, dykes, and dunes that Netherlands must maintain.

Climate change is an especially important concern here, as the country lies even further below sea level than New Orleans. Keeping the land free from flooding requires a lot more thought and preparation than I had realized! 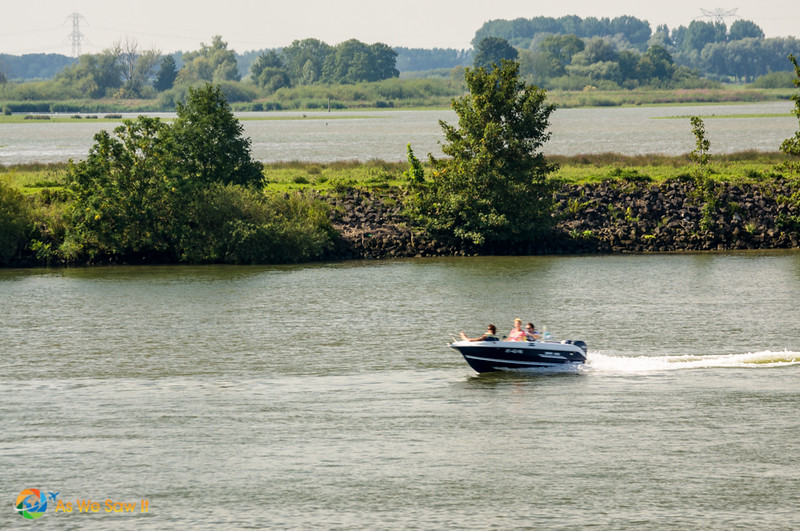 The Dutch are very water-oriented.

And speaking of epic flooding, there’s an actual ark in the Netherlands! When a Dutchman named Johan Huibers dreamed that the Netherlands was overwhelmed by a flood similar to the one in the Bible, he was inspired to rebuild the ark to the same proportions that God had given to Noah.

The ark is moored on the Rhine at Dordrecht, south of Rotterdam. Huibers kindly put life-sized animal statues on its deck to help give an idea of its proportions.

Having seen it on our prior cruise, I knew that we would pass right by it, so I made sure to tell Dewi that I’d like her to give me a “heads up” and point it out as we passed. Dewi asked the Captain to tell her when we were approaching so she could let us know.

Based on her reaction, I realized that it’s not a sight they normally mention, so I’m glad I did. The other passengers really enjoyed the sight as well.

ⓘ TIP: If you have time while you’re in Holland, it is possible visit the ark yourself, because it has become a tourist attraction. If you want to see it the ark as you cruise by, you will need to ask your Program Director to point it out.

Even though both the ark and Kinderdijk (Dutch for “child dike”) are both located near Rotterdam, our cruise schedule allowed enough time to enjoy a delicious lunch before we docked.

When we finally arrived, we were so close that we could see the tops of the windmills from the Sun Deck! Time to do some Dutch sight seeing.

ⓘ TIP: If you’re unsure which activity to join, note that cheese is made worldwide, but Kinderdijk is the only site in the world with so many historic Dutch windmills. So, yeah: Faced with the choice, you should see the windmills.

Kinderdijk is a UNESCO World Heritage Site because it contains all the typical features associated with this technology – dikes, reservoirs, pumping stations, administrative buildings – and 19 beautifully preserved windmills.

Talk about a Kodak moment! These photogenic structures stand like soldiers in two opposite rows along a canal and form a spectacular sight. 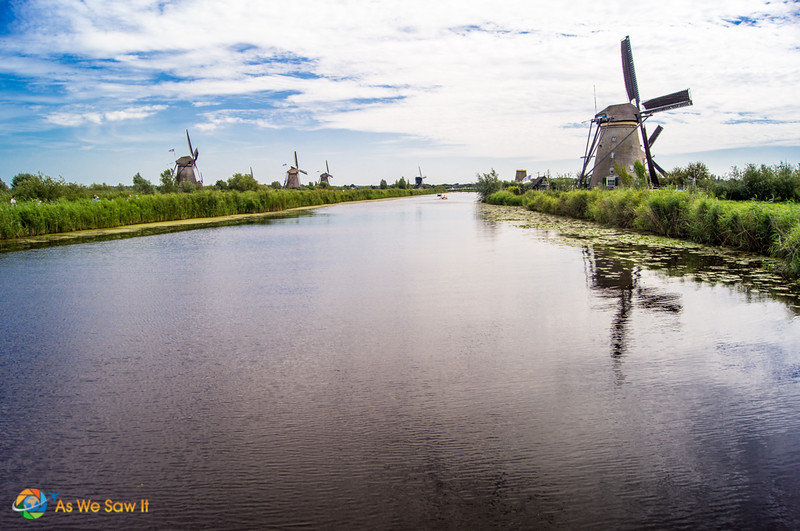 These windmills are still inhabited year-round and those who live in them are required to maintain them to the same standards as the 1400s when they were built. That said, the country no longer relies on windmills to stay dry. These days the country uses pumping stations and here too, the main waterworks are provided by two adjacent diesel pumping stations.

Today’s included excursion gave a rare opportunity to understand how windmills work in an up-close-and-personal way, as well as to visit one of the pumping stations. Most visitors want to climb into at least one windmill to see the pumping mechanism and living quarters. Some also took the boat around (it is suitable for wheelchairs).

ⓘ TIP: If you have problems with staircases or tight spaces, entering a windmill is not a good idea. 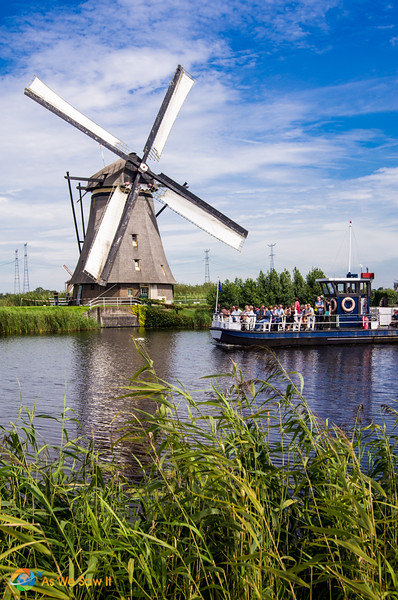 Things to do at Kinderdijk windmills

There are a lot of things you can do when visiting the windmills. Of course, taking pictures of the stunning landscape is a given, as is the ubiquitous selfie.

Aside from that, we think the best part is exploring the inside of a windmill. Imagine what it would be like to live there!

There’s enough to do that everyone will enjoy the visit.

If you’re a frequent cruiser, you may have seen and photographed the Kinderdijk windmills on a previous tour. In that case, you might opt to tour a cheese farm instead. Our bus took us to a dairy farm in the town of Giessenburg.

We all gawked as we drove through the sleepy little town. It was just as interesting as the farm. Certainly, it was prettier! 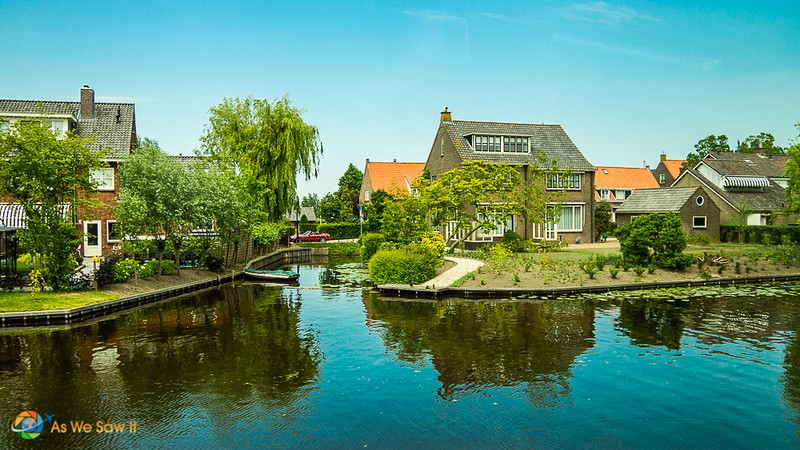 The fronts of the houses all face the water

Best known for Gouda and Edam, Holland is the #1 cheese exporting nation in the world. Gouda is the most popular, and the farm we visited caters to the demand.

As we discovered on our tour, it is possible to produce Gouda in a ridiculous variety of flavors. The flavor gets stronger as it ages as well, and it reaches full maturity (and crumble-ability) at 2-3 years of age.

We toured the farm 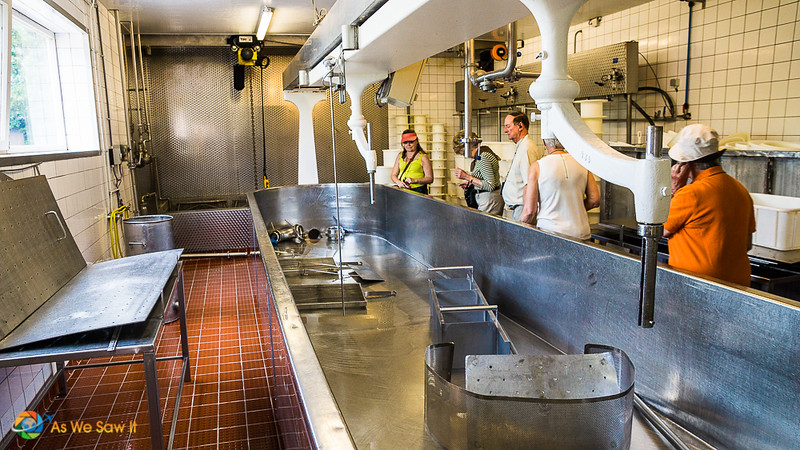 Saw where the milk is cultured 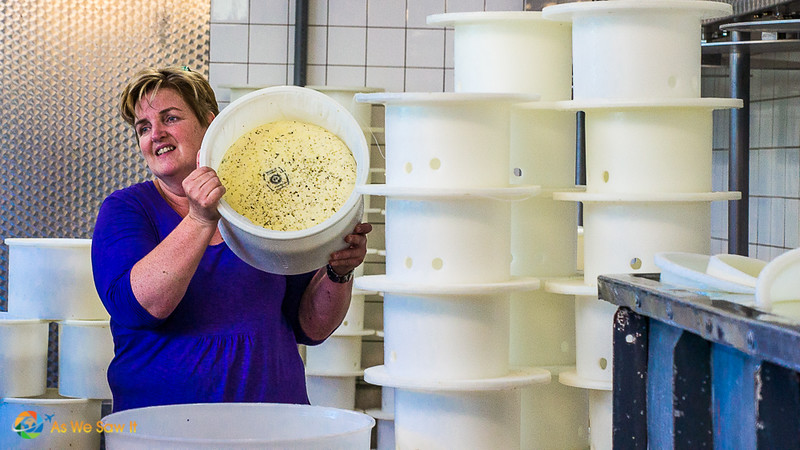 And learned how they make their cheese. 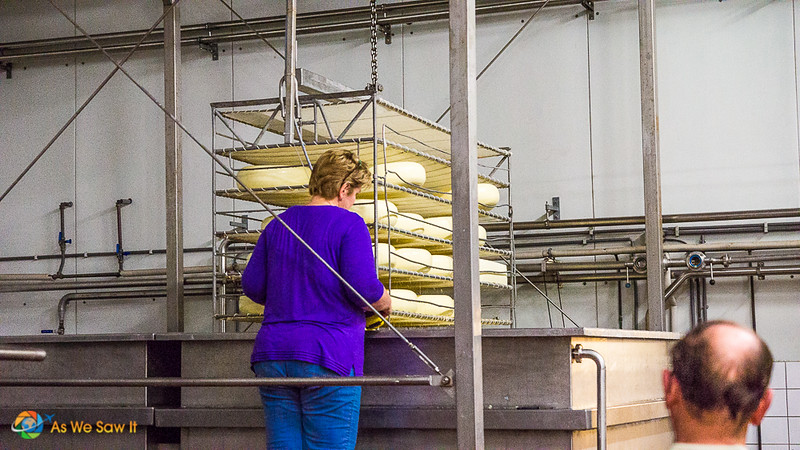 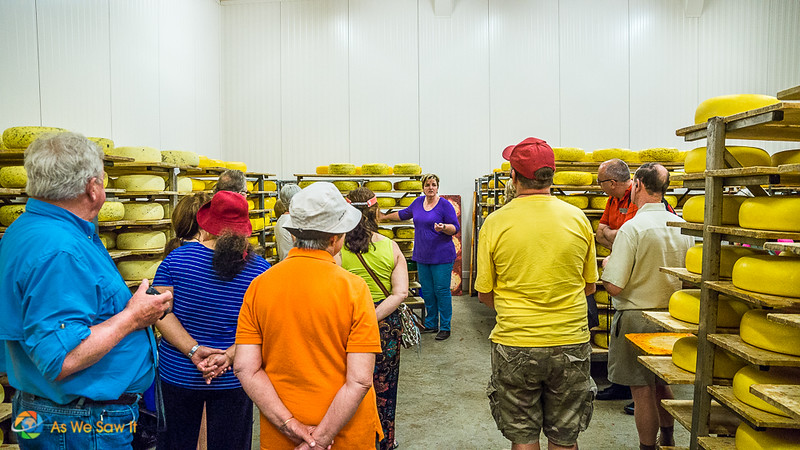 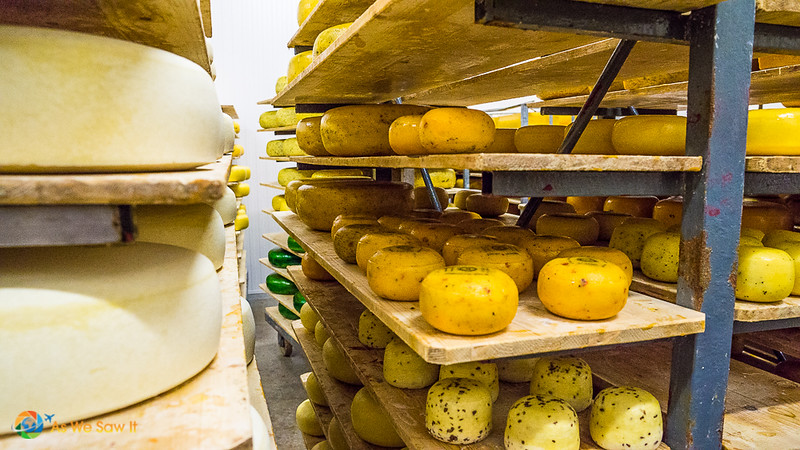 Gouda comes in various flavors and sizes. It becomes more crumbly as it ages.

The farm has a lovely gift shop and offers samples of all their various gouda flavors. Dan and I ended up with three different types to bring back to share with our family in the U.S.

Back aboard our ship, the lobby was crowded with passengers settling their final bills. We joined the queue and missed the afternoon’s presentation on the Dutch Golden Age. Dang.

I was disappointed, to say the least. It’s an interesting era in Holland’s history and I had wanted to learn more. But at least we got to spend a little more time with our new English friends, Pam and Fiona. 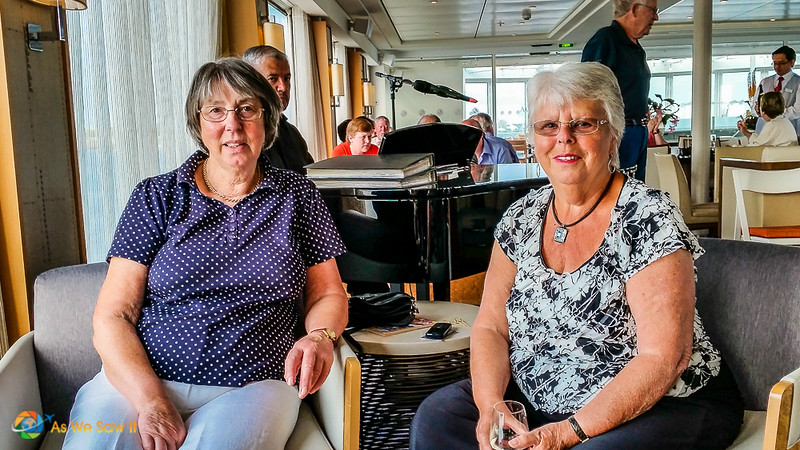 The Lounge seemed to a little more sedate after dinner because everyone had settled their bills. Once again, we were glad we had the all-inclusive drinks package. Arthur the bartender wasn’t able to accept cash payments, so only those who had purchased the package were able to enjoy his services tonight. 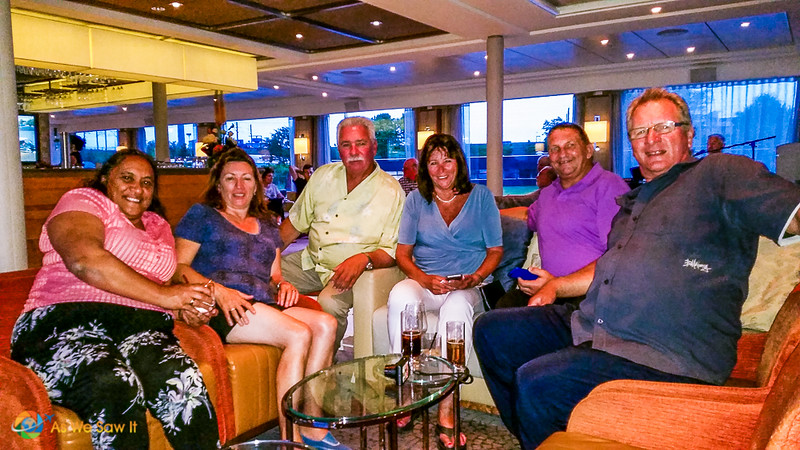 More of the delightful people we met on our cruise

Here’s where it really pays to travel light: You don’t have much last-minute packing to do. Those who had already prepared for departure were exchanging contact information with their new-found friends. We tried to get as many email addresses as we could, as well.

Departure plans a big topic, because Viking does not include a tour of Amsterdam at the end of the cruise. I’m glad we had spent a day in Amsterdam before because we were able to help a few plan what they would do in town.

Is The Netherlands A Rich Country?

25 Surprising Facts About Christmas in the Netherlands