Subtropical Brisbane’s fantastic weather is one of its biggest claims to fame. The city enjoys around 280 days of sunshine each year and it never gets really cold – even in July, the city’s coldest month, daytime temperatures range from 11–23°C.

But it does get humid in this part of Queensland. At the height of the Australian summer, from December to February, Brissie can get uncomfortably sticky and big thunderstorms sometimes roll in at the end of the day. If you’re coming from the northern hemisphere winter, however, that’s a small price to pay, and you can always cool off on the coast or at Brisbane’s city beach.

That said, it shouldn’t be entirely surprising that the busy season in Brisbane is during the cooler and drier months. This is when most big events are scheduled and it’s the most comfortable time to be in town, and still warm enough to swim and enjoy the sun.

The main thing to watch when choosing a time to visit is the Australian school calendar. In Brisbane, like the rest of Queensland, school holidays bring a huge increase in visitor numbers as families flock to the sunshine state with the kids. Here’s a guide to the best times to visit Queensland’s first city.

The Australian winter is the peak season for Brisbane, when the sun shines reliably and there’s very little rain. The best festivals are held at this balmy time of year, especially in May and September. Temperatures are warm but not overpowering, rising to around 26°C (79°F) and rarely dipping below 11°C. You’ll still be in your T-shirt and thongs by day, but you’ll need long sleeves for the evening.

The months from June to August are when Australia’s southerners, shivering in their offices in Melbourne and Sydney, take quick, impulsive weekend trips to Queensland to defrost. During the school holidays (which are staggered over different states in June/July and across September) you’ll need to book well in advance to secure accommodation and domestic flights.

January, a swelteringly hot and humid month in Brisbane, is still a travel high season thanks to the Australian school summer holidays. Temperatures can reach 45°C (113°F), with regular days of heavy rain, but the city is still packed with holidaying families. Book well ahead for accommodation, activities and transport.

The Australia spring and autumn (fall) shoulder seasons are good times to visit Brisbane. At the end of March, the uncomfortably hot and humid summer conditions finally ease and temperatures drop to a more manageable 15–25°C (59-77°F). Humidity eases up too and accommodation and travel prices fall from their winter peak (except during the Easter school holidays).

From October, the mild days become increasingly warm; sunny days are cooled by sea breezes but the big rains haven’t yet arrived. October is also a great month for festivals – all of Brisbane seems to be hitting the town in search of a party. 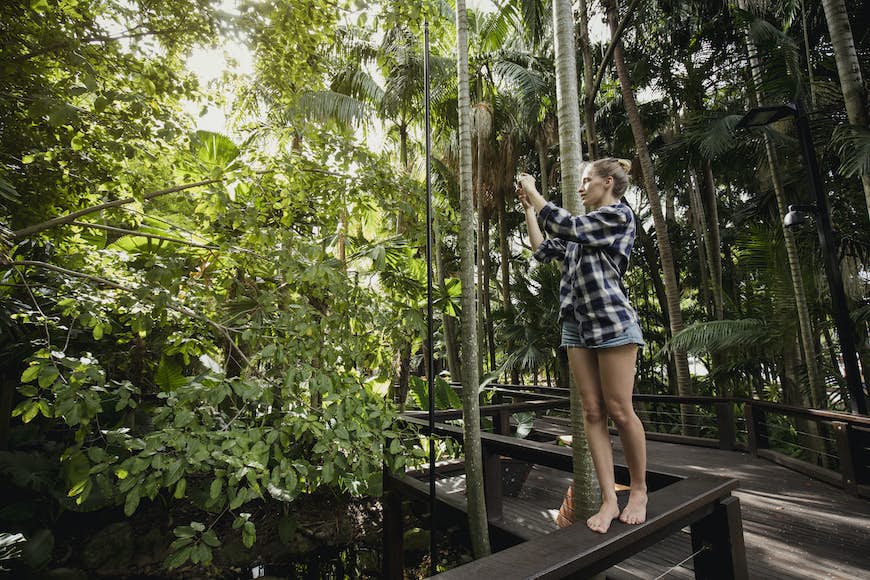 When Brisbane bakes in the summer heat, locals head for the parks © SolStock / Getty Images

The low season (November–December & February) is best for budget travel

The Australian summer is the low season in Brisbane, with the exception of the January school holidays, when prices are at a premium. There’s a reason for this: in summer the city is hot and sweaty and often drenched in rain. Average temperatures hover between 22°C (72°F) and 30°C (86°F) and can claim higher, and monthly rainfall can be triple the winter average.

But this is a great time to snag an accommodation bargain, and the arrival of dramatic thunderstorms can actually be a drawcard if you like elemental forces. It’s also peak surf season in South-East Queensland, and every third year the Asia-Pacific Triennial of Contemporary Art, organised by the Queensland Art Gallery hits town over summer (it’s running from December 2021 to April 2022).

Hello school holidays. All of Australia’s schoolchildren seem to be packed into the state of Queensland in January, despite the uncomfortably hot and sticky weather. Crowds and accommodation prices soar, especially at theme parks and kid-friendly attractions.
Key events: Uncaged Festival

With the kids tucked back into their school uniforms, Queensland can breathe out. However, temperatures remain high and humidity reaches its peak in February, at 65-70%.
Key events: BrisAsia Festival, Queensland Cabaret Festival

Slowly the heat and humidity begin to subside and there are great deals to be had on accommodation and fewer tourists around.
Key events: Brisbane Ice Cream Festival, Weird Science Festival Brisbane

Brisbane’s sunniest month is a good time to visit, with Brisbaneites slowly emerging from their air-conditioned hibernation. Try to avoid the visitor spike over Easter, but otherwise, make the most of the sunny weather for beach trips and activities.
Key events: Oceania Cycling Championships, Redcliffe Festival of Sails 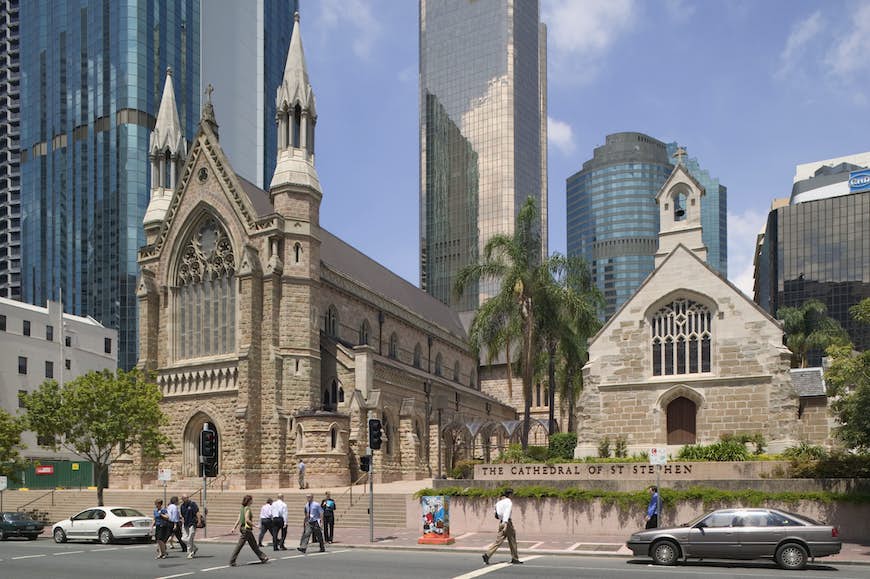 The beginning of the most pleasant part of the year. With the heat and humidity no longer an issue, this is also the start of Brisbane’s festival season with loads happening in and around the city. It’s a great time to be in town.
Key events: Brisbane Comedy Festival, Paniyiri, Brisbane Street Art Festival, MELT Festival of Queer Arts & Culture, Anywhere Festival, Brisbane Gin Festival, Brisbane Writers Festival

Humpback whales begin their migration off the coast which lasts until October. Avoid the June/July school holidays when prices can skyrocket.
Key events: Brisbane Marathon, Out of the Box Festival

The coldest month of the year rarely drops below 11°C even at night, but pack a jumper.
Key events: State of Origin

Brisbanites get a public holiday in celebration of the Royal Queensland Show, known as the Ekka, in this pleasantly sunny month.
Key events: The Ekka, Bridge to Brisbane 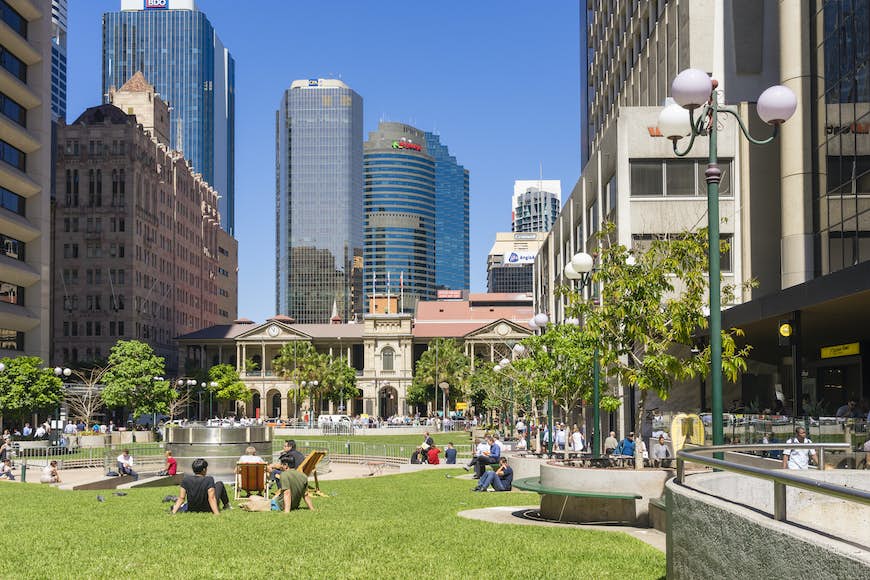 Fantastic weather and some premium events coincide with the school holidays in the super-high-season month of September. The Brisbane Festival always brings a crowd, particularly for the end-of-festival Riverfire fireworks – book everything in advance.
Key events: Brisbane Festival, NRL Grand Final, Bigsound Festival

Festival-packed October sees the city out in the streets as the temperatures start to warm. This is also a great time to see jacarandas erupting in lilac blooms across the city.

As the heat increases, thunder begins to crack over Brisbane and the rain begins to fall. Humidity is on the rise.
Key events: Wynnum Fringe

Brisbane winds into the summer solstice and Christmas with hot, humid days, violent thunderstorms and an influx of southern tourists for the holidays.
Key events: Moonlight Cinema, Wildlands

An Alternative Guide To Perth And Its Best-Kept Secrets